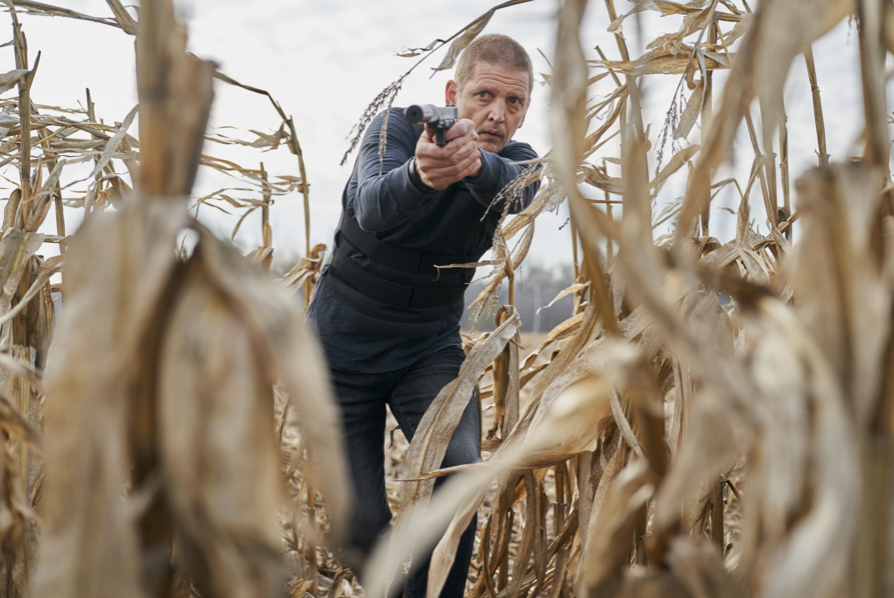 I’ve written much about the current state of Canadian Content (or CANCON) in my time on this site. I most recently laid out my feelings in an article two weeks ago. With a bill to dramatically increase the funding for our cultural industries still on the table (free speech concerns notwithstanding), it seems apt that a near-perfect example of the faults of the current CANCON funding system should land on my desk, the Ontario-lensed and Canuck-populated Hollywood-clone, Trigger Point.

Loner Nicholas Shaw (Barry Pepper) lives the quite life outside small town, USA (Bayfield, Ontario for the film location tourists). But like anybody with a surplus of security cams and gun closets, he has a secret past of intrigue and espionage gone wrong that tends to rudely interrupt his consciousness via black-and-white flashbacks.

The plot rolls into town in the form of Telefilm’s favourite bald thespians, Colm Feore and Carlo Rota, playing Nick’s old boss Elias and his right hand Dwight respectively. It turns out that Nick has been in hiding for breaking under torture and blabbing identities that left many agents dead, deaths he was then framed for. Elias’s daughter Monica (Eve Harlow) has since been kidnapped after she found evidence of the true source of the hits. A guilt-tripped Nick agrees to help Elias retrieve her and perhaps get to the bottom of who set him up, no matter how many bullets or plot twists it takes.

I certainly can’t accuse 24 veteran director Brad Turner and co of delivering anything less than a solid B-movie thriller with Trigger Point. Barry Pepper deftly leads a cast with nary a weak link among them, even with a screenplay often giving them the bare minimum to work with. Special kudos is reserved for cinematographer Brett Van Dyke who effortlessly captures the well-staged bits of action and makes even the most pedestrian location look like a million bucks.

That being said, I was left at the end-credits feeling “so what?”. The movie functions well enough, but does astonishingly little to energize the audience or give them something new (an inspired piece of Macgyver-ing illustrates what this film could’ve used more of). What we’re left with is a John Wick knock off with all the fun and colour sucked out. Audiences deserve more than a competent painty-by-numbers production to lure them in. I can’t be sure if actually setting the thing where it was shot would’ve added enough flavour, but it certainly would’ve been worth a try.

Hollywood clones like this continue to play it safe and that simply doesn’t cut it. With a little more meat on the bones and maple syrup in the veins, Trigger Point may have deserved the sequel it desperately tries to set up in the final reel. As it stands, it’s merely 80 minutes of handsome VOD filler.