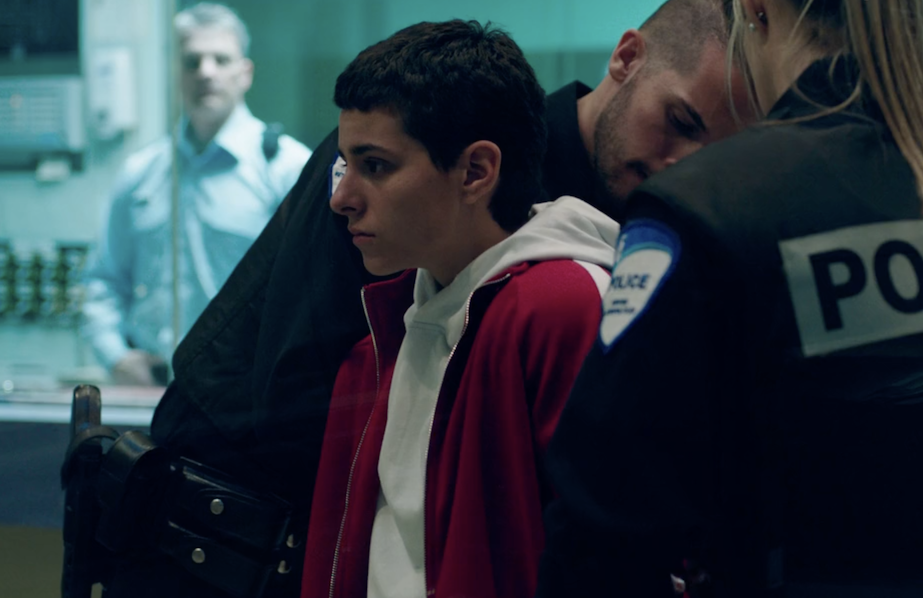 Film sets have stand-ins. When a film production has a stunt double for an actor, nobody can really tell the difference. But when you put a stand-in into a real life situation, ANYONE could find out the difference. French Canadian films used to be frequent for me. Nowadays, I barely see one. Recently, I got a chance to see the film, Antigone, a French Canadian production about a high school girl with the same name (Nahéma Ricci) who moved to Quebec via immigration where she and her family, the Hipponomes, are labeled as permanent residents. Living with her grandmother and 3 siblings (their parents died long ago) Antigone’s life is pretty fair. Within the first ten 10 minutes, she’s shown to be having fun with her grandma and siblings, winning an award of lots of money, doing great in school, and even falling in love with a boy named Hémon (Antoine DesRochers). Or at least things are all good, until her brother Étéocle (Hakin Brahimi) gets shot when a couple of policemen nab her other brother Polynice (Rawad El-Zein) and keep him held in prison. From there, Étéocle’s death goes viral through the wonderful fiber-optic wire we call the Internet and the family goes into a depressing turmoil as it’s apparent Polynice will most likely be deported for his crimes. Antigone decides the best thing is to give herself a makeover consisting of gang tattoos on her arms, a super short haircut from her sister Isméne (Nour Belkhiria), and a plan to save her brother. Dressing like a dude is certainly a done concept, but in this case, she’s doing it to take her brother’s place in jail. Oh, sure. What’s the worst that could happen? Anyways, Antigone and her grandmother Menoeceus or Meni (Rachida Oussaada) sneak into the prison with Antigone wearing the most unconvincing wig I usually see on emo Youtubers. Somehow, it works. Polynice goes away on a bus to the states dressed like an All Time Low fan, while Antigone is with a bunch of beefy convicts in a big ol’ jail. She instantly gets found out and arrested, even getting the French Canadian version of the Miranda Rights read to her (Does that even exist in Canada?) and taken to a proper prison away from a bunch of dudes. But at the same time, the police know Antigone hid her felon of a brother somewhere and expect to know where. During an interrogation, an officer shows Polynice’s file and all the many crimes he has done along with her other older brother Étéocle who wasn’t only a soccer player but also somewhat involved in the gang life. It only gets much worse when Grandma Meni is arrested too leaving every family member to fend for themselves in the different plights they’re in. Meni prays for the release of her daughter while 150m away from her due to parole, Isméne lives alone and takes care of matters for the household, and Antigone herself is hailed as a hero both by her classmates and her innmates.

It’s a film that shows how family can look out for each other. Normally if someone close to you ends up being who you least expect, it’s debatable if you’ll still accept them for who they are. In this case, Meni still accepts her kids despite becoming felons, and Antigone still remembers her brother as a close and personal part of her life instead of just another youth wrapped up in gang life. But even so, one can still be deceived, because you may not know someone as well as you think. Take me for example. There’s a lot of things that everyone doesn’t know about me. You also learn that no matter how elaborate a plan goes, it may not always work. This is one of the few movies I’ve seen that shows it. One of the more dramatic and feeling inducing types of films, it also shows a bit of comic relief in one courtroom scene where everyone in attendance seems to have all their phones go off at once with the same ringtone. The videos and photos showcased during montages of social media are certainly not your average screenshots or newspaper headlines with some town crier announcing what happened, instead they’re much more creative looking featuring comments of Internet arguments, the process of photo manipulation, and several different vertical phone-shot vids of different things happening at once. Sound is also very elaborate and moving, and the whole concept is interesting yet edgy. Given the concept, one can definitely see how prison or even escaping prison can affect a family should they get involved. My mother once warned me and my brother not to do something like that should one of us go to jail for whatever reason, but then we can both manage without each other’s help. I’m also glad both of us don’t have the slightest of a criminal record despite our occasional cynical mannerisms. Still a gripping story about how brave a woman can be, based off a classic Greek tale, Antigone is one amazing modern day retelling that deserves to be watched, and admired. While I’m not too familiar with Sophie Deraspe, I can certainly this is her best work so far, and I can’t wait to see where it goes beyond Whistler.