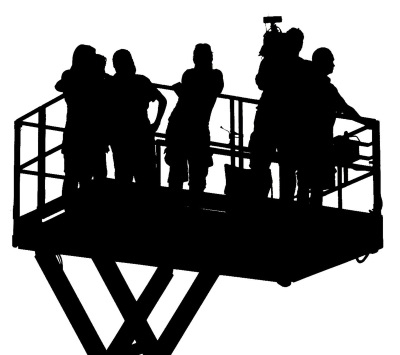 Just yesterday, I got called in to work as a background extra for an episode in a not-yet-released web series called Electra Woman and Dyna Girl.

This is actually a reboot of a classic kids’ show from 1976. It’s about two superhero women (part-time; their secret identities work as magazine reporters) who go on missions to defeat whatever villain is out to destroy their town. The original was  very similar to the 1960s Batman series even copying most of the format down to the details (teenage sidekick, gadgets with jargony names like the ElectraCar). Only 16 episodes ever got made though.

It’s in the process of being rebooted into an online series starring Youtube Celebrities Hannah Hart  and Grace Helbig. The show now takes place in the future (year currently unspecified) in Los Angeles, even though it’s being shot in Vancouver (yeah, that’s unusual).

In-universe, superheroes are now treated like celebrities which means people take pictures of them and with them, get autographs, and lots more, at conventions very similar to modern comic-cons. But as of recently, the super duo of girls are getting sick and tired of all the attention and want to step down from being superheroes/celebrities and do something different for once. This series has the hilarity potential to generate lots of viewers depending on how well the jokes pan out.Being on set myself, I did find myself laughing at the humour the pairing was setting up.I also found it interesting to see the other heroes that are being involved as minor characters in the series.

Speaking as a background extra who only got to be in a few assorted shots,  it seems like a worthwhile show and I hope to see it make great progress.