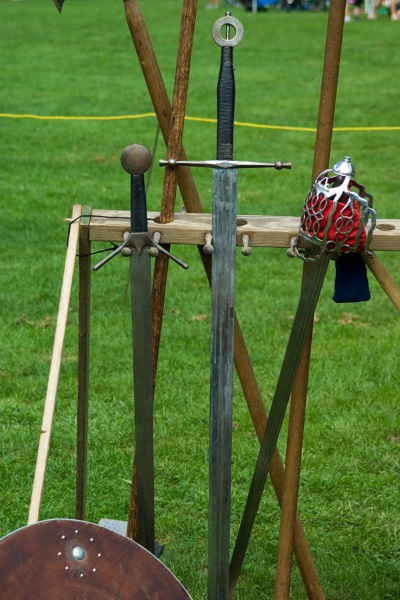 Recently I have taken interest in a series called LARPs, which is about five people getting together live-action role-playing (LARPing) as fictional medieval characters they’ve created, going on all kinds of quests. So far there are eight episodes and the series is still ongoing as the creators are working on a second season.

The idea originally came from Jon Verrall, who writes the series, and it is directed by Julian Stamboulieh. It stars Scott Humphrey(Will), Elizabeth Neale(Shane), Charlotte Rogers(Brittany), Jonathan Silver(Arthur), and Jon Verrall(Evan).

The series doesn’t really have a storyline to it, as each episode has a different focus, and they all seem to be rather short, lasting only around eight minutes each. However there is a minor ongoing story between the two characters Will and Brittany, who get together as their characters (Biff and Corillia respectively) and start dating during the role-playing session — although real-life dating doesn’t seem to work out for them. The other characters include Evan the Game Master, who’s in charge of every gaming session and takes on the role of enemies/obstacles throughout the gameplay. Shane role-plays a Paladin who takes the role-playing a little more seriously than everyone else. Finally, Arthur role-plays a warrior named Noctis who tends to monologue to himself every once in a while.

The series could use a little work on the writing, but the characters are pretty well developed and the camera shots really get good detail. The episodes are short but they seem to be a pretty good length for what they need to be, so it works out and makes the series enjoyable for every episode.

2 thoughts on “LARPs: A Review”