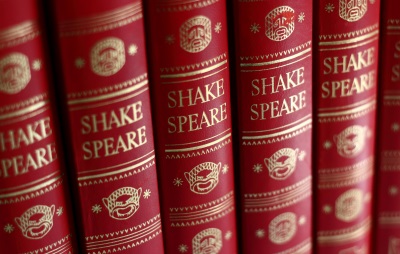 After my last review regarding that galactic gobbledy-gook, I decided to settle for something shorter and with less action and more intentional humour. I went ahead and checked out the very first episode for a web series called Complete Works, which is about a young man named Hal with a crazy interest in Shakespeare.

Through a series of well laid out flashbacks with professional child actors and stunning scenery, we go all the way from Hal at age 2-19 to the present day where he is waiting to be announced as a finalist for a Shakespeare competition in Italy. However, he does not win and is outdone by an Amish girl. Weeks later as Hal is moping, the host of the contest calls him up saying Dorothy is unable to make it, and as runner-up, Hal gets to step in.

Hal makes it all the way over to Italy. He looks around the lovely place where the competition is and heads to the main room where he finds himself facing many other competitors and three celebrity judges. A presentation is then shown by the host of the contest who explains what will happen in the competition.

First the contestants are required to recite a Shakespearean monologue. However, not all of them are top notch, and I started to wonder how some of these contestants made it to the absolute finals. The next requirement is to team up the contestants for a partnering scene. Hal is unable to find a partner as nobody wants to associate with him. He ends up partnering with an intimidating girl named Pauline. It’s hard to find a scene they can both agree on and even harder for Hal to be able to fit in with these other actors who clearly don’t care much for him at all.

I found this to be funny and interesting. Anyone who felt they’ve never really belonged somewhere new before can relate to Hal in this wacky adventure he’s on. The concept is a perfect tribute to Shakespeare himself. I hope to find some more episodes of this soon.