Norm Hiscock grew up in Montreal, Quebec, watching sitcoms and sketch shows from a young age. This led him to be drawn to screenwriting immediately, a fascination that led him from childhood, to film school, and finally to Hollywood, where he has worked on some of the biggest comedy shows of the decade. He has been a screenwriter on Parks and Recreation, Brooklyn Nine-Nine, Saturday Night Live, King of the Hill, and many more hilarious productions.

Hiscock will be imparting his wisdom to the next generation of screenwriters at InFocus Film School’s three-part How To Develop a Comedy Series. On April 21st, April 28th, and May 5th Norm will be presenting skills and methods to help new screenwriters break into the comedy writing industry. 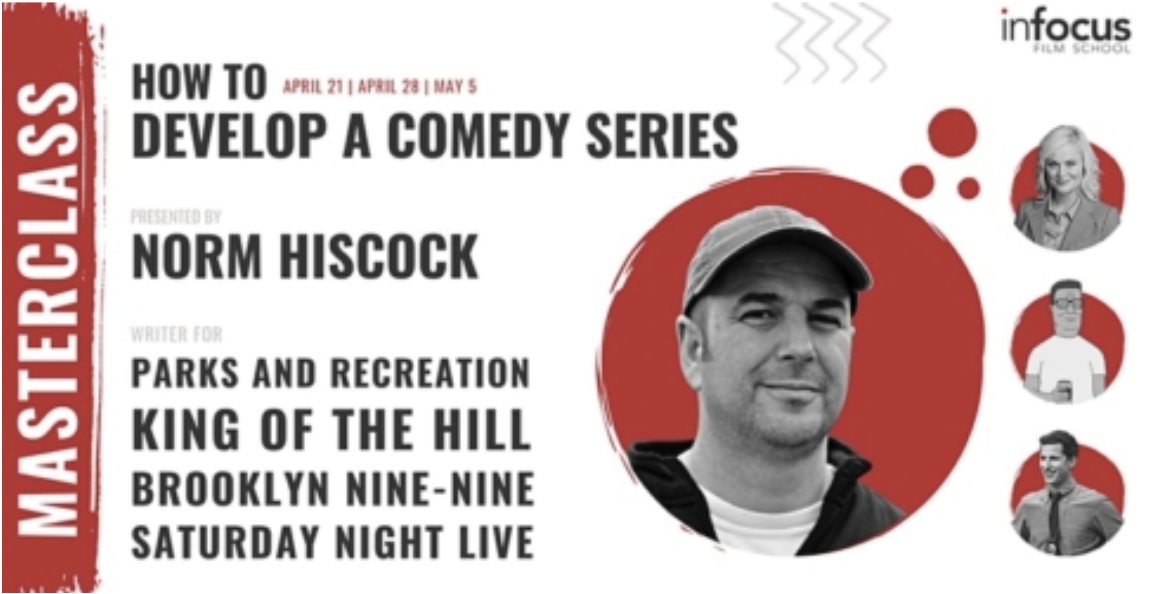 “I think it’s important for new writers to develop a writing voice through constant writing, but I also think that new writers should be given some of the basic tools that most TV writers use and learn how to use them and why … before breaking the rules,” he says. Hiscock has the basic tools mastered from years of experience on set.  “I hope they start to recognize the combined elements that make a half hour comedy work. To also see the importance of a beginning, middle and end for scenes and story structure,” he added. At this point in his career, Hiscock is looking forward to sharing how new writers can achieve comedy that tells a hilarious story.

The film industry can be intimidating for young artists, writers, and filmmakers looking to get their foot in the door. “I’m excited to talk about writing with people who are excited by the prospect of writing and hopefully demystify some aspects of it.” Hiscock knows what it is like to be drawn to an industry and eager for more information on the technical side.“Even though I didn’t really understand what a writer did, it just seemed cool that creatively the script was the blueprint and this sparked other people’s imagination,” he recalled when thinking about watching comedy and sketch shows at a young age. By breaking down the basics and sharing his journey, Hiscock is an excellent resource out there for those interested in pursuing screenwriting.

Over a series of three classes with InFocus Film School’s Screenwriting Program, Hiscock will be teaching the attendee’s how to develop a comedy series from concept to season finale using his industry experience to guide the discussion. He will share how to find your unique voice as a comedy writer and break down episodes he has written for several successful shows. There will also be an opportunity for listeners to ask questions they may have about Hiscock’s experience in the industry and screenwriting techniques.

“I am looking forward to imparting some of the things I learned along the way through writing scripts, being in a room with other writers and running writing rooms,” he says. “Rewriting is the most important skill. And a writer shouldn’t be afraid of doing this. It is important to master the basics and apply tools to make scripts funnier and stronger in terms of storytelling. “Rewriting helps sharpen the focus of the story … and layering it through character.”

This speaker series is a great opportunity to learn from one of the most accomplished Canadian screenwriters and see a behind-the-scenes perspective on some of the most popular comedy shows today. Whether you are an aspiring screenwriter or a huge fan of Parks and Recreation, take this chance to learn more about the comedy television industry! If you are looking for more information on the event, click here to learn more.