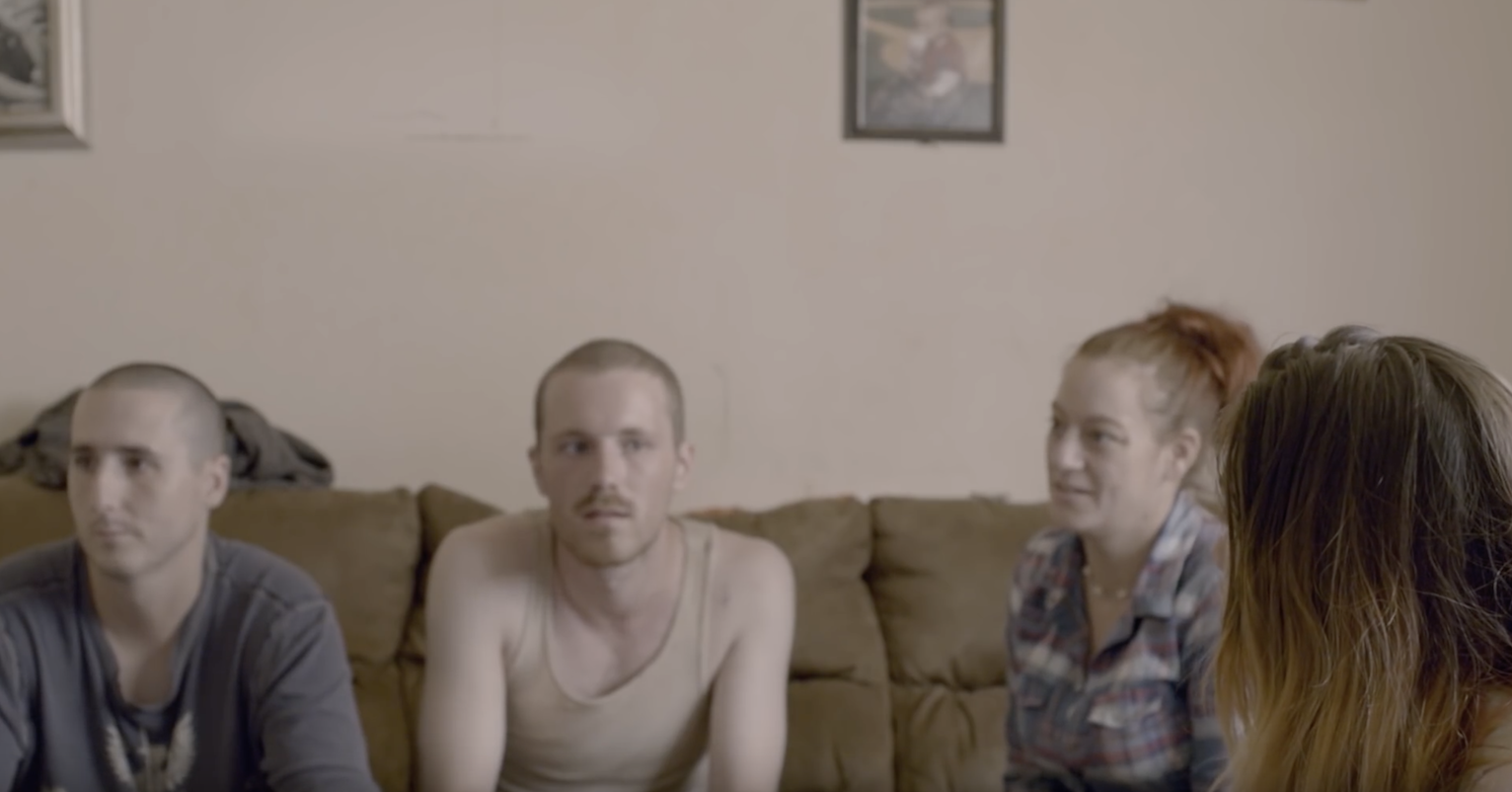 From the opening shot of a frayed clothes line being taken down, to the haunting image that followed, I was fascinated by Ashley McKenzie’s 2016 directorial debut Werewolf. The creative flair of McKenzie’s style is reminiscent of Xavier Dolan, exhibiting the potential to be a driving force in the Canadian cinema. But alas, much like Dolan, McKenzie’s flourishes can, at times, far outreach her own grasp, losing sight of her narrative and its characters in the process.

Set in New Waterford, on the outskirts of Cape Breton, Werewolf is a tale of two heroin addicts Blaise (Andrew Gillis) and Vanessa (Bhreagh MacNeil), who are on the methadone program and hoping to kick their habit for hopes of a better life together. Homeless, the lovers reside in an abandoned trailer in the wilderness, while their most valuable possession is an old lawnmower, which they use to cut lawns to make some kind of a living.

Indeed, this is an uncompromising piece of cinema that effectively conveys the difficulties of Canadian youth, as the issues which Blaise and Vanessa face are beyond their years, but face them they must. At one point Blaise poignantly tells a doctor “You don’t understand how a person like me lives. You have no idea. And if you knew you wouldn’t do it either. You couldn’t live one day in my life.” It is a testament to the performance by Gillis that he is able to convey here the erraticism of an addict in withdrawal, while still maintaining a tragic humanity through unbridled truth. It is made all the more impressive by the fact that the scene is taken in one fixed shot, where only the lower part of his face and the upper part of his body is in view.

Such unconventional camerawork is a constant of Werewolf, and the very reason why I was so enthralled by its opening images. MacKenzie and her cinematographer, Scott Moore, use numerous close-up shots paired with reserved editing to uncover the subtle truths exposed through the words, expressions and body language of her talented leads, with the intention of inevitably revealing the humanity beneath it all. The use of lingering images is furthered by powerful visual metaphors that do well to tell a story beyond the realm of words, but it is also through the cinematography that the cracks begin to show.

I can still remember thinking to myself, after the opening shots, that the cinematography was intriguing, but that Werewolf could be undone by this very factor it if not managed correctly. While still beautifully shot, there is, unfortunately, an occasionally suffocating emphasis on visual storytelling, which sees shots persisting past the point of necessity, leading to problems with the pacing in certain scenes. This results in the film feeling longer than its 79-minute runtime, which should not be the case for such a relatively short feature.

The occasional lack of narrative thread or dialogue can create an unintended distance between the leading characters and I also, with the greatest victim of this being Vanessa. While I admire the underlying strength and ultimate tenacity of her character, by the conclusion I felt like I knew very little about her otherwise. Much of her development is relegated to an overabundance of silent musings and low-key dialogue, which made her seems less developed than the more vocal Blaise, and I could not help but feel disappointed by what could have been with a much deeper and more realised characterisation.

Werewolf is an impressive debut from newcomer Ashley MacKenzie, whose complex subject matter and difficult themes make for a challenging viewing that rewards in doses. A fundamentally problematic narrative flow and sporadically overzealous cinematography hinder an emotional story of two lost souls who can either survive through separation or submit to a star-crossed fate, but there is certainly an innate talent to MacKenzie. Although my feelings for her debut are mixed, I nonetheless maintain a keen anticipation for her future works, as the writer and director possesses a profound eye for the human condition that can compete with that of any documentarian.