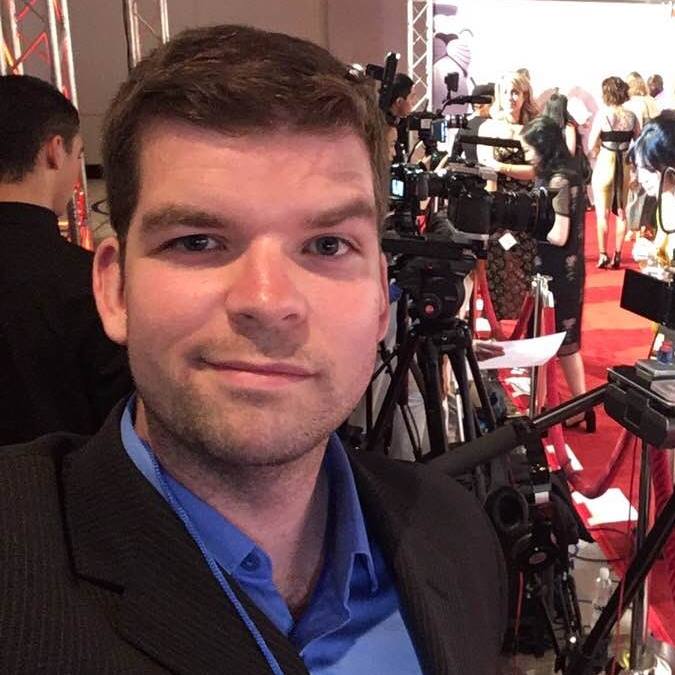 Los Angeles has the Oscars and Toronto has the Canadian Screen Awards, but here in Vancouver, the red carpet rolled out for three nights of the LEO AWARDS, now celebrating their 20th edition since their inception in 1999.

I was fortunate enough to attend the third and final night of the awards where the trophies for directing, writing, producing and performance would be handed out. This meant that many of our province’s best and brightest stars would be in attendance and the Hollywood North team was on hand to meet them on the red carpet.

“It’s always fun” quips Corner Gas creator & star Brent Butt on his hosting duties. “I really enjoy hosting events all the way back from being a greasy nightclub comic. I enjoy variety and bringing up different acts and keeping things moving.” Photo courtesy of Luba Popovic, Out of Frame Studios and Leo Awards

And things indeed moved swiftly along the carpet as multiple media outlets jockeyed for photos and soundbites from over 100 personalities as they shuffled past the photo wall. One of these was local TV star Sara Canning, nominated for Best Female Lead in Prodigals.

“I knew Nick Carella and Michelle Ouellet (producers). They had just written a script and Nick talked to me about it.’ relates Sara as she recalls the film’s genesis. “I read the script and anything set in a small town I’m immediately like ‘yup, love that. I’m in.’  I love independent film. We all flew to Sault Ste. Marie together. So it’s a very intimate process I think, Indie film. I like off the beaten track.”

One category thats always been the local industry’s bread and butter is the Movie of the Week (colloquially referred to as ‘MOWs’ within the biz). The Hallmark Channel alone makes over 70 of these each year, most of them within the 604 area code.

“Hallmark is a really great employer and they promote women in huge roles.” says Ali Liebert, nominated for her leading role in A Gift to Remember. Having had supporting roles in several other Hallmark vehicles, Liebert has recently ventured into producing with her last Hallamrk-starring role in February’s Cooking with Love. “All the stories are really focused around females. So it’s been really exciting to try a different side of the camera.” The red carpet eventually lead straight into the Hyatt Regency ballroom where the awards portion of the evening unfolded. Our hosts Brent Butt with his wife and frequent co-star Nancy Robertson set a playful tone to the proceedings with a faux-flashback video to the first Leo awards in 1999 which Butt and Robertson re-enact in true screwball comedy fashion. They also took some time to poke fun at how one never seems to appear on-screen without the other in a skit depicting decidedly un-Corner Gas-like roles.

Awards for Student Production, Stunt Co-ordination, and Guest Performances were handed out before turning to Short Drama, TV Movie and Motion Picture categories. Teen refugee story Rupture snapped up key Short Drama trophies including Best Program and Directing. Black Kite, a middle eastern family drama about a father who defies a Taliban law prohibiting kite flying for the sake of his daughter won three of it’s four nominations including Best Program and Screenwriting. UP TV’s Christmas Princess reigned supreme in the Television Movie category with awards for Casting, Directing, Lead Female Performance and Program bestowed upon the holiday underdog story.

The program was certainly no dry affair as our hosts and presenters kept things moving in a light and breezy fashion. The evening did have it’s more reflective moments however with a showcase for the recently launched Calltime, an initiative focused on better mental health resources for film professionals followed by a moving performance of Leonard Cohen’s “Hallelujah” by the lovely and talented Tiffany Desrosiers.

As with all Gala events, soon the champagne runs out and everyone heads home. I’ve been to many industry events before including Raindance, Celluloid Social Club and VIFF, but theres nothing quite like the glitz and glamour of a red carpet. Vancouver’s film community is a lively and passionate bunch and I look forward to further enjoying their company at next year’s event.