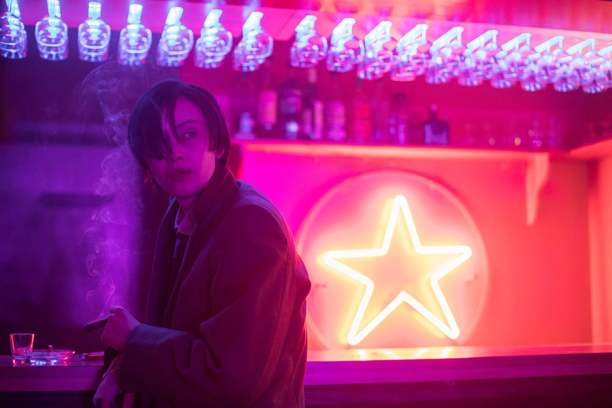 “Find out what makes you happy and do it” says one character to the protagonist of Sook-Yin Lee’s supernatural drama Octavio is Dead! This is not always easily accomplished, especially when one’s happiness may come at the expense of others.

Tyler (Sarah Gadon) is a directionless twenty-something suffering from a severe case of arrested development. Still living at home and even sharing a bed with her overbearing mother Joan (Rosanna Arquette), Tyler’s routine existence is shattered when she both loses her bookstore job and inherits the entire estate of her recently deceased father, Octavio (Raoul Max Trujillo) all in the same day. Having never met her father and pitying her mother for being left out of his will, Tyler signs over the estate to her. But upon learning that Joan prevented Octavio from contacting her years before, Tyler impulsively takes the keys to the apartment and takes the first bus out of town.

She arrives to find a virtual mausoleum with none of Octavio’s possessions (mostly books) apparently moved. The place is a mess and the plumbing doesn’t work, forcing her to shower via garden hose in the greenhouse alcove. As she starts to clean the place up, she suddenly comes face to face with the ghost of Octavio himself. With the encounter leaving her with more questions than answers, she starts by investigating his grave, leading her to a mens-only club where she promptly disguises herself to gain access.

It is here that she meets the dashing Greek Apostolis (Dimitris Kitsos), a former student of Octavio and they are soon taken with each other. Unfortunately for Tyler, Apostolis is gay and has mistaken her male disguise for the genuine article. Complicating matters further is that Octavio’s ghost also has the hots for his former student! As Tyler discovers more about both her father and herself, will she have the courage to tell Apostolis the truth? Her mother showing up unexpectedly sure won’t help matters.

Octavio may be dead, but both his actor and the remainder of the cast make this tidy thriller a lively ride. Sarah Gadon could easily mislead the viewer into thinking she’s about to give a lifeless performance, but her transformation from a woman-child into independent adult is anything but. It requires some investment from the audience, but her journey as Tyler in both male and female forms will leave you either crying, cheering or maybe both. Raoul Max Trujillo is given curiously little screen time for a titular character but makes the most of it with a striking turn that sticks in your memory and may even prompt comparisons to Val Kilmer’s turn as Elvis in True Romance(at least it did for me). Rosanna Arquette makes your teeth grind as alcoholic control-freak Joan while Dimitri Kitsos lends warmth to the proceedings, albeit with a little less panache than his peers.

Sook Yin Lee keeps a steady hand as director with a solid pace and a frame filled with the juicy renderings of Daniel Grant. The icy cold Ontario streets are exquisitely rendered with the mens club scene especially striking. I don’t mean to come down too hard on the makeup department, but I doubt even they could convince the most delusional person that Tyler was in fact a biological male, but as she laments in the third act, Apostolis “sees what he wants to see.”

All of this makes for a satisfying experience at the cinema, shortcomings and all. That being said, I’m sure Toronto must be frustrated at remaining unidentified yet AGAIN in another Canadian-funded production (this is a huge gripe for me folks, get used to it).

Octavio is Dead! screens at International Village on Friday August 10, 7pm as part of VQFF