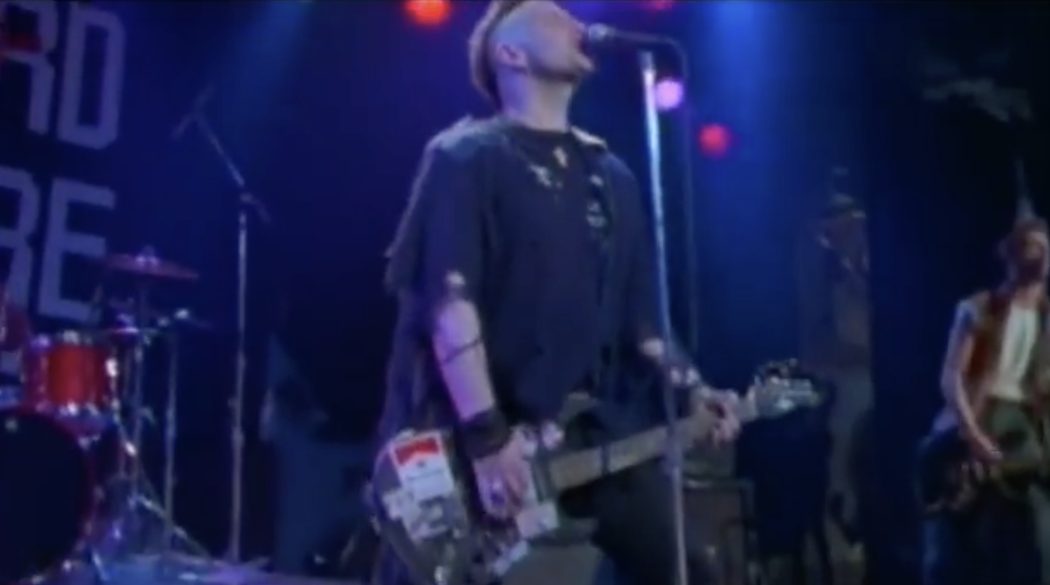 Having analysed and reviewed the found footage films of Matt Johnson in these past few weeks, it is fair to say I have been going through something of a cinematic uber-realism phase. This is made all the more apparent by my viewing of Bruce MacDonald’s 1996 mockumentary Hard Core Logo, which is considered by many to be Canada’s response to This Is Spinal Tap. While this is an understandable comparison to make, it is also an unfair one, as Hard Core Logo does enough to mark itself as a distinguished achievement in faux documentary cinema, and not just by Canadian standards.

The parallels to This Is Spinal Tap are unquestionably there, from the concept of a documentary filmmaker following a band on a promotional tour (played by the director of the film), to the live performances that capture the respective music genre being depicted, but it is the faithful encapsulation of punk, as well as its characters, that sets Hard Core Logo apart.

Director Bruce McDonald shows that he very much understands the old adage of ‘punk is dead,’ as he wisely personifies this through his four lead characters Joe Dick (Hugh Dillon), Billy Talent (Callum Keith Rennie), John Oxenberger (John Pyper-Ferguson) and Pipefitter (Bernie Coulson), who each embody different aspects of the genre. Dillon in particular is pitch-perfect as Joe, who is essentially the Johnny Rotten of the group, literally spitting in the face of commercialism with his unbridled disposition, characterising the old-school of punk.

Meanwhile, the more reserved Billy Talent represents an opposing movement in the punk genre, discarding its very roots in favour of making an actual living from his musical endeavours. This, of course, generates sporadic tension between Joe and Billy that is the compellingly central conflict of the film, but thankfully this is not a one-note dynamic between the two friends.

Even John and Pipefitter, whose roles are ultimately secondary to Joe and Billy, have their own significant parts to play, an aspect from which music biopic Straight Outta Compton could have taken a few notes.

John, in particular, is an enthralling individual whose depiction of schizophrenia makes for some of the most sobering moments in the film, namely because he is otherwise the most relatable everyman of the punk quartet. Mental anguish aside, John also adds an unexpected depth to the film through his philosophical narration, which allows us to understand both him and the band in a more intimate manner, untainted by the lies they tell both themselves and one another.

I have dedicated a large chunk of my review to critiquing the main characters at the heart of Hard Core Logo, but this is because they are the very aspect that drives it. I was able to forget all about the constructs of narrative, and that this is ultimately a mockumentary. McDonald’s own unobtrusive participation is crucial to this, which helps sell the moments where it feels like these are honest-to-God punk rockers who were seminal to the underground Canadian punk scene.

That being said, the scene in which they trip on LSD had me momentarily released from the trance of believability which McDonald worked so hard to induce, making me question the point of it all. Even if there is one, I am not sure it can justify this intrusion of engrossment.

After the LSD scene though, McDonald picks up right where he left off, careening toward a conclusion that is both impactful and representative of the director’s own view on the state of punk. If it is indeed dead, then at least his characters show every sign of life, being a collective of wholly individual personalities that could go toe-to-toe with any other fleshed-out family drama. In that sense, Hard Core Logo dares to be dysfunctionally different, and while it might hit the occasional pothole along the way, it is a rewarding journey, and one I hope to undertake again.