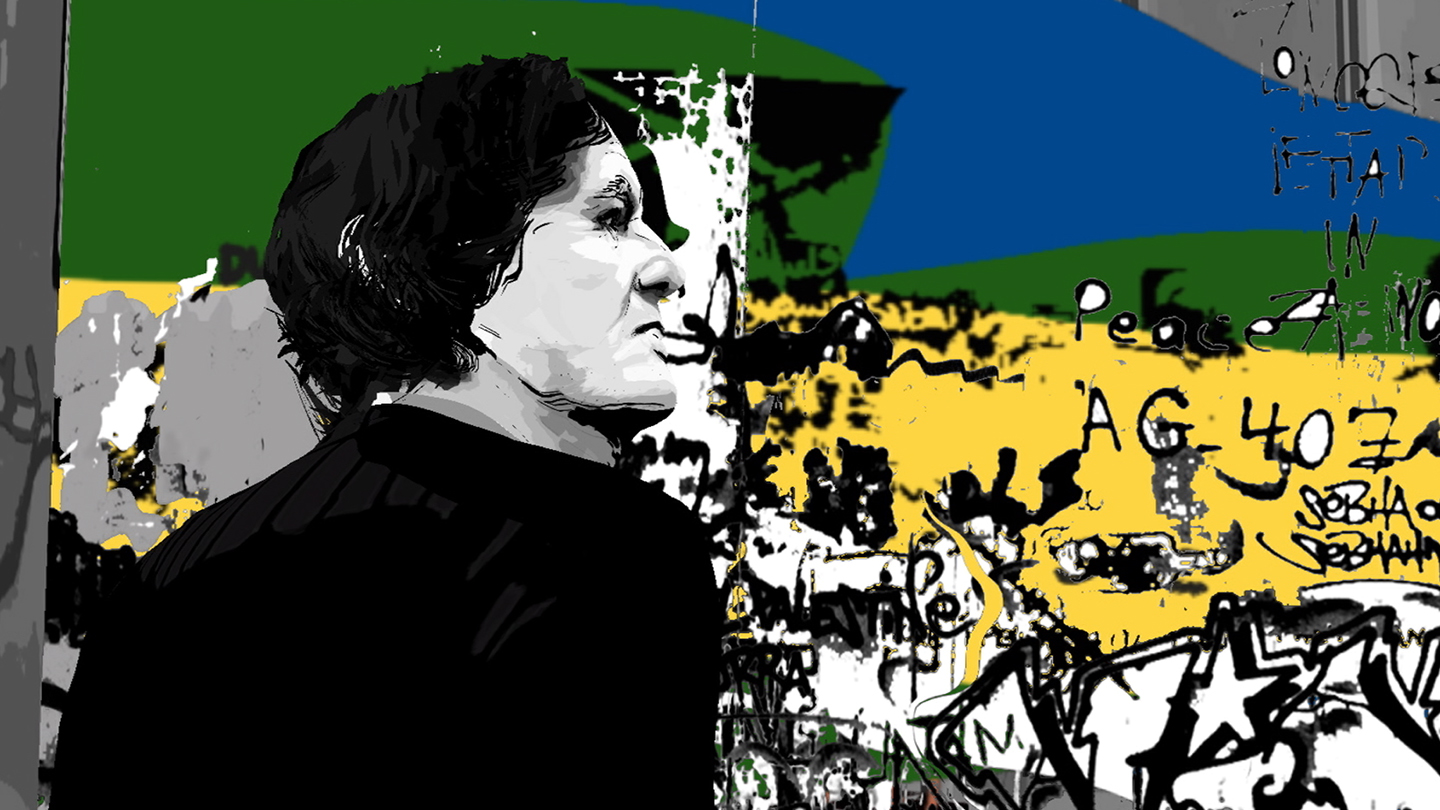 If you follow world events then you may be aware of the Israel/Palestine conflict. In the aftermath of suicide bombings and no resolution in sight to stop the violence, Israel has built a wall dividing both countries in the hopes of ending more innocent deaths. One giant indiscriminant wall that seems to capture more territory in its construction than it originally once had. The purpose was to keep its people safe while sending a message to Palestine. What has it really done though? Who is the winner and who is the loser? Depending on whose side you’re on, could alter your answer. It’s difficult for most of us to even be concerned when we live in a peaceful country oblivious to extreme violence and acts of hate rooted for centuries. However, they share our planet and we all have a responsibility to ensure innocent lives are not sacrificed in the name of religion or tyranny.

Does the wall represent the line in the sand you dare not cross or is it much more than that? Accomplished playwright David Hare has written a monologue that examines the impact the wall has had on the people of Palestine and Israel. Animator/filmmaker Cam Christiansen adds imagery to the story through brilliant animation and fictional characters that act as our guide as we traverse the 708 km. length of the wall in the 82 min. feature animation, WALL.

I was very fortunate to be able to view the film before speaking with Cam Christiansen on the directing and animation of the film. I’d never seen a feature length animated documentary before. WALL is an amazing film that puts you in the driver seat and introduces you to the monstrosity (the wall) and the conflict surrounding it.

“What inspired you to make this documentary?”

“I was actually asked by the National Film Board. They had a monologue written by David Hare. It was a pretty awesome opportunity.”

“In the film, the story focuses on the actual wall containing Israel. Could you ever foresee a time where the wall comes down?”

“Not in our lifetime, unfortunately. I wish I could be more optimistic but I don’t see it happening.”

“Considering you only had a monologue as a guide, how much more research and info gathering did you have to compile before putting pen to paper?”

“One of the first steps was travelling to England to meet with David Hare. We all sat down and discussed how the monologue could be adapted into a screenplay. Although the film is pretty faithful to the monologue we did create a few fictional elements. With the monologue it’s pretty much one person standing on stage talking. We wanted to create something much more dynamic and give you the feeling like you’re there. That was created as a visual device to help you understand it. It is a huge wall that takes on many forms. It’s not just concrete blocks, it’s flying checkpoints, it’s razor wire and really hard to understand the physical reality of it unless you’re there. That was one of the challenges. How do we do that? It was one of the devices we used to help us achieve that.”

“How familiar were you with the conflict going on in the Middle East before taking on the documentary?”

“Nothing more than any other North American. It was very new to me and I was actually quite intimidated by the whole thing. It’s such a hot button topic and you know it’s potentially going to ignite a lot of passions on both sides.  I was pretty apprehensive about it but on the other hand David Harris’s writing is so strong. This is really his territory and he tries to make sense of complicated hot button issues so I knew we were in good hands. I felt really comfortable with the way he handled it and it was a great honor to be able to breathe life into it in an animated way.”

The animation is extremely engaging from start to finish and the illustrations are brilliant with an element of realism.

“When did you get involved in the project?”

“It’s been a long process of almost 8 years. It was a hugely ambitious project. It’s only been the second feature animation the NFB has made, so it’s very rare.”

Cam lives in Calgary and began his career in web development for many years. In the earlier years of web development there was a lot of flash and animation, which led him to working with animation extensively. He says he started making animation for his friends before getting involved with the NFB and making more short animated films, before his endeavor into this one.

“How does this film compare to past animations you’ve been involved in?”

“It was incredibly intense on pretty much every level. The politics and just the physical task of trying to make an animated feature with a small team was incredibly demanding. We really burned the candle on both ends.  The first few years were fun but as time went on the tension level ratcheted up and up. The film has also taken awhile to connect with its audience, because it is such a unique film and is so political. It has finally started to connect and we just got back from an amazing festival in Annecy, France, home of the largest animation festival in the world. We had great press from the French media. It screened in front of an audience of 1000 and was just incredibly fantastic.  In a lot of ways I think of myself as more of a filmmaker than animator so it was so wonderful to be embraced by all the other animators. In a lot of ways it felt like we were breaking a lot of rules in animation.”

“It was kind of a dogma because in animation you can’t do anything naturalistic. There’s this term in animation referred to as ‘the uncanny valley’ meaning, the closer the animation gets closer to reality, people perceive it to be creepy. In that sense, it was really challenging for me because I couldn’t visualize the whole film being cartoon characters since it’s such a serious topic. It felt like it would undercut the message by making it cartoony.”

“Where was the film released?”

“We had our first screening in Calgary because I live there. From there it went to Santa Barbara, San Francisco, the Copenhagen Docs, which is also another incredible festival. We were also in Edinborough recently and the film is currently in Brazil. Annecy has really opened up a whole new world for us. We received a lot of invites across Europe as well as Central America. It seems like the French were very interested in the film compared to other countries.”

“Are there any plans to get the film into a festival in the Middle East?”

“Yes, we got an invite to Tel Aviv. It’ll be interesting and I’m really looking forward to it.”

“Did you travel to the Middle East for research?”

“Definitely, it was essential to the film. I ended up going three times. I was a little concerned about being an outsider and representing the material in a way that felt truthful. If you’re from that region and watch the film, you quickly realize that we’d been there. I’d taken so many photos and had so much reference material. I recreated everything. Even though it’s an animation I have a lot of artistic licensing and I chose to connect it to the actual location, to give the material more credibility.  I’ve had people on both the Arab and the Jewish side say it felt very truthful. That really felt good because I worked very hard to achieve that. It was also a very novel idea of making an animated documentary. It was fun to pursue that.”

“How much creative control did you have when creating the illustrations?”

“I had worked with David Hare and two producers very intimately but on the visual level I had full control. I had to sell it to them but I made all the conscious choices based on being an outsider and the need to be okay with it. I didn’t want to be accused of orientalism, where Westerners come to the Middle East and get it all wrong. I really wanted someone that lives there to watch it and say, this guy’s been here before.”

“As far as references go, how many did you use to piece it together?”

“It was a real laboursome process. This was at a time when Google maps didn’t exist. I kind of created my own version of Google maps by mounting 3 cameras to the car and then drove across the landscapes.  I recorded everything and later scrubbed through it all to find the locations they’d be talking about as well as understand the geography and the way it all played out. A lot of it was so beautiful, if I hadn’t of gone out I would’ve missed out on a lot of great stuff. When we travelled there Harper was still in power and he was quite pro Israel. It was the first time in my life where I’d travelled and I’d not been liked as a Canadian.  I never experienced that before.”

“What is the biggest takeaway you’ve discovered making this film?”

“I think I’ve discovered I need a break from animation (he laughs).  It was just so demanding. I’m actually working on a live action film right now. I really love the part of the storytelling. I think that’s transferable into live action. Maybe I’ll go back to animation someday but I do feel I’ve accomplished what I set out to do.  Long ago in the days of Polar Express, to create animation would cost millions but those costs have come down considerably. These days it is possible to be an Indy animator and that’s what I set out to do. The one good thing about not having a lot of money to make animations is, you have a lot of creative control and you’re able to take on topics that Pixar or Disney wouldn’t touch. This film would never have been made by a big studio because it’s just too controversial.  I’m quite proud of that actually and I think it’s fantastic. I want to move onto some new challenges now and live action is where I’m headed. I’m looking for new territories to discover.”

“If you had a chance to make this film again, what would you do differently?”

“I’d have to have a big team. I did make some mistakes. I brought a lot of people in too early when I should’ve waited a year. A lot of work we ended up doing we never ended up using, so I learned some lessons.”

“What is your biggest hope for this film now that it’s out there?”

“It’s nice to see that it’s finally finding it’s audience and we’ve had a couple offers from broadcasters in Japan and one in Europe to show a shorter 50 minute version of it. I hope they go through because it would be a nice way to reach a larger audience. If it made it to Netflix, that would also be fine. I just want to get it out to the world to have it seen by as many people as possible. I do realize that it’s not for everyone but for the people that are familiar, it really connects with them and I’m pretty happy about that, especially after all the effort gone into it.”

The film has won its first award in Alberta, an AMPIA (Alberta Media Production Industry Association).  I’m certain it will go onto receive many more accolades because of its uniqueness. Absolutely superb.