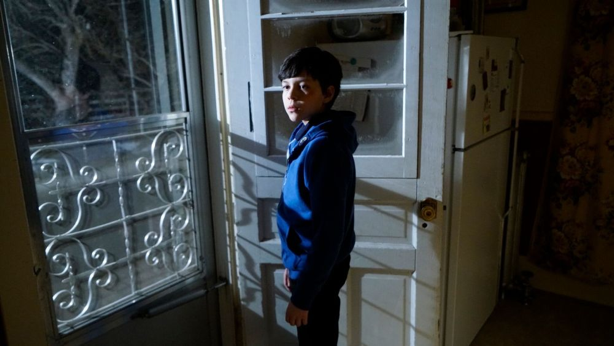 12 year-old Henry (Lucas Villacis) is reluctantly living the farm life after being dropped with his misanthropic Grandpa Jacob (Michael Ironside) for the weej by his parents who’re seemingly seeking some quality couple time after a death in the family. While initially chafing at his new rustic surroundings, Henry soon bonds with Jacob over a shared love of baseball with the elder teaching the kid some new pitches.

The reunion comes to crashing halt however as Henry awakens one morning to find his Grandpa as stone cold as the winter storm outside. He is able to get only one garbled voicemail off to his parents before his cell battery conveniently dies. With no charger handy, he is thus forced to seek the aid of next door neighbour Dixon (Munro Chambers) who Jacob had previously warned him to steer clear of. The reason why soon becomes clear as Henry realizes Dixon has zero intention of calling for help, but to instead enact an unrequited revenge on the deceased with Henry as his only available target.

The R-Rated game of “Home Alone” is on as Henry desperately tries to stay one step ahead of his maniacal foe with a series of traps and cunning perhaps honed from hours of video gameplay. He’s in for a long night as each move reveals deeper and darker secrets of the man his grandpa really was and who Dixon is to the both of them. And that’s all before they find out what’s hidden in the basement!

Knuckleball is the precisely type of bloody, thrill-a-minute entertainment genre fans crave. The actors are all well in their element with Villacis managing to hold his own as the resourceful young protagonist. Chambers does a complete 180 from his wide-eyed young hero role in Turbo Kidto bloodthirsty psychopath. Fortunately for the audience, he smartly plays things close to the chest until all hell breaks loose.

The film is well shot, designed, edited with all the elements in place for an engaging moviegoing experience. Where it falls short is in its utter predictability. The film mines various home-invasion thriller cliches and although it executes them well, they are cliches nonetheless. The story could have found perhaps a bit more redemption at it’s conclusion but keeps its hand obscured when perhaps it should have laid more cards on the table. The film also appears to be set in Montana judging by the “Ravalli County” police uniforms so a point is docked for yet another unnecessary use of an American setting in a Canadian film.

Peterson has crafted a well-oiled, if unremarkable thriller. There’s more than enough fun here for genre purists to sink their teeth into, but not as much for those looking for something that elevates the game.