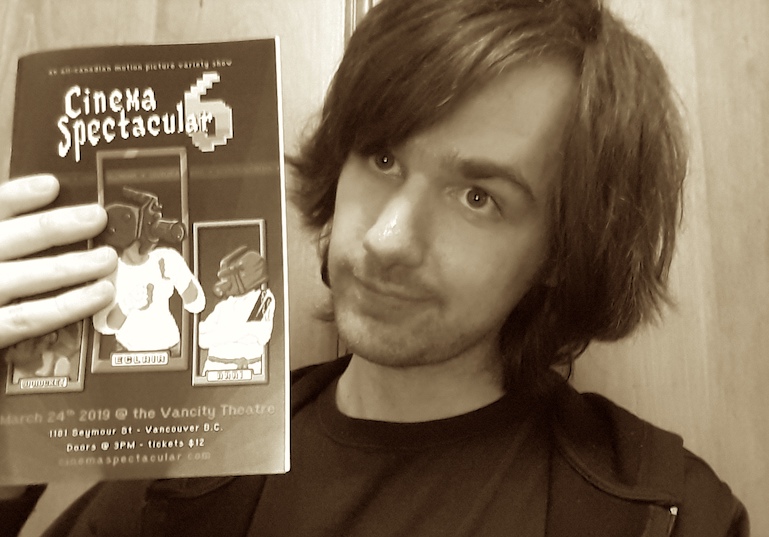 It’s been a while since I’ve covered this kind of event, but I figured hey, why not? Cinema Spectacular 6 is like many screening events such as East Van Showcase, showing short films to celebrate filmmakers. Most times at Cinema Spectacular, the films showcased are Canadian or local. Except for that one time one year I didn’t attend. Anyways, This year’s had a simple yet well-arranged layout. Taking place at Vancity Theatre where almost everything film-related happens, CS6 started out with a 30 minute opening settling time for people to mingle, buy raffle tickets, refreshments and other merchandise at nearby tables. Nothing set the vibe for that better than Funny Death and his futuristic music.

It took a while for things to get started, but finally an opening by Jamie Taylor and Sarah Faye Bernstein kicked things off. In between, they invited Festival Founder Laurel Brown to make a speech thanking everyone for their attendance and support. After that, the two ladies managed to wrap things up with their short quick opening riddled with bad jokes. But Program 1 finally started up. First off was a no-dialogue short documentary called Remediation showcasing Luke Parnell as he takes one of his carvings on one of the longest hikes I’ve ever seen. Afterwards came Serisa 26, another documentary with some humour to it as it focused on art student Serisa Fitz-James who explains her many different personas in funny and interesting detail. Interestingly enough, director Rheanna Toy found Serisa at a festival and decided to cover her in this well made showcase. Things lightened up even more with short film Intimate Fears, a story a young woman named Eve who just can’t maintain sexual relationships very well. She soon finds herself talking to a rookie sex coach who was recommended by her best friend. It was very strange and silly but I still enjoyed it a lot. Everything’s Great! was also a humorous film which really showed the awkwardness of a lesbian girl struggling with her platonic relationship, her feuding parents, and a clogged toilet. Made by Linnea Ritland who made another personal favourite with similar subject material. Concluding this segment was Road Gang, which I think was a French-Canadian music video about kids doing all kinds of crazy things. I kind of liked it. I don’t know why, but it reminds me of something I wrote in the past. All of Program 1 was a blend of education and comedy with a little bit of strangeness. After an intermission came the raffle that everyone was pumped for, where people either won a tote bag that was either empty or full. It was all luck of the draw at that one, but not many people bought raffle tickets anyhow. Moving on to Program 2, the first film was a short simplistic but informative film called All Happened Before, which all happened before my eyes. Really, it was a super short film showing the bond between a little girl and her babysitter as she learns about age and love in a very interesting style. It’s a good change of perspective. Not a whole lot else to say, so I’ll move on to 15, a French-Canadian film about a boy named William who is constantly being bullied at school. One day, he finally has to show his strength and courage among his classmates to prove who he is. A very hopeful film with a great concept that shows how strong one can be. Also coming from Quebec was Raven’s Memories which was an old-fashioned historic documentary that told the tale of Max Gros-Louis as he fought for his own native culture from many years ago. It was very informative. Check made by the amazing Meeshelle Neal was a great short film – sorry, I already talked about it. Moving on to Insomnia, a film which was a wide array of animated collective experiences about Insomnia of course. Very artistic, not much to explain but the visuals are very creative. The final film of the night was called That’s Why I Like It, by Sydney Southam. The film pretty much exposed stories about strippers and pole dancers that I never thought I’d hear from. An interesting new story that sheds light on sex workers and people who shake their bodies in front of perverse and lonely guys. Contrary to one of my comedy routines, I have never been in a strip club before, unless I count that one time – ah, never mind. This was a very interesting film which was 95% narration complete with coloured squares showing on and off footage of woman’s butts shaking all around, slowly hypnotizing the audience. Program 2 seemed pretty minimal but it provided a lot of interesting information.

Concluding the event was a Q&A with some of the filmmakers who happened to be attending. After that, everyone talked even more at the afterparty that happened at Tavern at the New Oxford. Cinema Spectacular was great this year, and I’m hoping I get to go again next year.