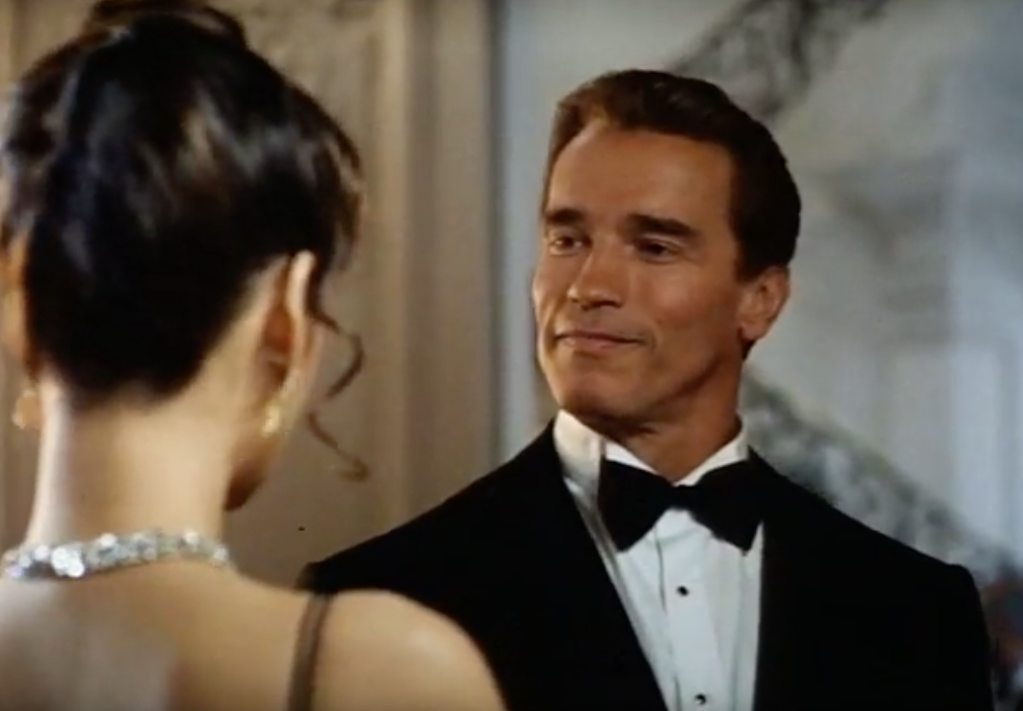 I am going to admit right off the bat that I am big James Cameron fan. Say what you will about the filmmaker, but he is able to produce, on a pretty consistent basis, gargantuan films that tend to push the technological envelope of the time, and for the betterment of the film industry going forward. My level of admiration was instilled at an early age, as I watched his Terminator films with my father as our collective jaws dropped to the floor. Titanic, meanwhile, made my mother and sister cry more times than I have even seen it. Though, one film by the director and screenwriter which tends to be more easily overlooked, even in spite of its commercial success, is 1994’s True Lies. Although I will readily admit that True Lies unquestionably fails to recapture the heights of some of his other classics, it is still hard to deny the damn good time I have any time I watch it.

Cameron is renowned as a blockbuster beast (the top two grossing films of all time are both by the filmmaker), and one of the key reasons for this comes down to his uncanny ability for firmly grounding a film within the given world it is depicting, however outlandish. While most will relate this to Avatar, the same can be said of his 1984 feature debut The Terminator, right up to 1991’s Terminator 2 three films later. Every one of his first four films are immersive science-fiction pieces with varying injections of action, whereas True Lies marks his first (and only) all-out action film minus the high concept science-fiction twist. Yet, curiously, while this is a film set in a world much like our own, one without vicious alien hordes or murderous cyborgs from the future, True Lies feels like his least grounded work up to that point, and arguably in his entire career.

Take the plot, for example. Arnold Schwarzenegger plays Harry Tasker, a U.S. government operative working for a counter-terrorism unit called “Omega Sector.” Before you even think it, yes, both the unit name and Schwarzenegger’s inescapable Austrian accent (which worked perfectly as the Terminator) are already sure to raise eyebrows, but I digress. Tasker hides his career from his Helen (Jamie Lee Curtis) and daughter Dana (Eliza Dushku), who believe he is a lowly computer salesman attending frequent conferences. However, when Harry learns that Helen had a near-affair with a fraudster posing as a spy (played by the late Bill Paxton), he tries to offer her the adventure she seeks, only to place his family in the crosshairs of a deadly terrorist organisation.

I understand this is an American action film, and by nature there will be implausibly cartoonish sequences which serve as eye candy for the audience, throwing all logic out the window in the process, but Cameron does so with his usual kinetic flare. Instead, my issues lie with some questionable plot points, which ultimately serve to further the story at the expense of its characters, namely Harry.

To be more specific, I found Harry’s kidnapping and subsequent interrogation of his wife to be grossly over the top, especially since she had never actually committed the affair. Consequently placing her in a simulated mission, then, feels like a misappropriation of resources, especially since the crux of marital problems was that Harry was too busy fighting off terrorists to spend time with his family. I am usually not one to nitpick, but, as much as it pains me to compare anything from James Cameron to Michael Bay, moments like these made me feel like I was watching a prequel to Bad Boys.

Thankfully, these early issues are offset by Cameron’s aforementioned eye for action, but even more so by his uncharacteristic, but wise, emphasis on comedy, which helps elevate this film beyond what could have been an overly bombastic affair.

Schwarzenegger has a proven ability for comedic timing, but the best source of laughs actually comes from Harry’s best friend and fellow agent Gib, played by Tom Arnold doing his usual Tom Arnold impression, and Bill Paxton’s Simon. In spite of my poking fun at Tom Arnold (I use his full name to avoid any confusion with the other Arnold), the actor actually provides some much-needed levity at the moments that needed it most, while there is an undeniable chemistry between him and Schwarzenegger, making it easy to believe that the two are close friends outside the film. Paxton’s dweeby Simon, then, adds some situational comedy to the mix for good measure, helping carry, for me, the weakest point in the film (as mentioned above), before being reintroduced in the closing scene for a nicely rounded, albeit predictable conclusion to the picture.

Overall, True Lies is a good – but not great – entry in the ever-impressive catalogue of films by the legend that is James Cameron. While it does require more suspension of disbelief than your average film by the director, and that really is saying something, it is also one of his more accessible films, where audiences can switch off the intellectual side of their brain and not search for underlying subtext. Simply sit back, and let James Cameron entertain you, just as he has been doing for more than 30 years now.