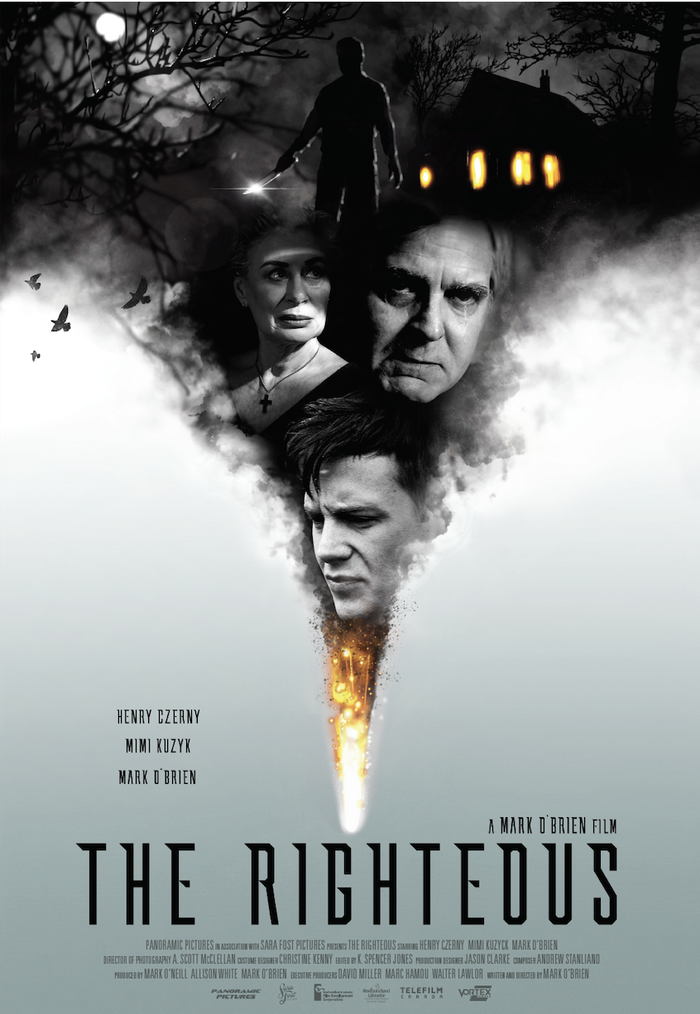 Does anyone ever question their life and who they are? Admittedly, I do so all the time. A disturbing new film is coming out tomorrow, and it’s one of the finest works of art I have ever seen. Written, directed, and even involving Mark O’Brien in a minor role, The Righteous explores what happens when your guilt comes back to haunt you years later.

When a little girl named Joanie Mason dies, everyone is affected, but her parents Frederick (Henry Czerny) and Ethel (Mimi Kuzyk) are most affected of all. Her father Frederick continues to feel upset and has many issues, and the Graham (Nigel Bennett), the local priest in his town recommends Frederick return to being a priest as a way of possibly rehabilitating himself. Frederick just feels life is going to get worse and worse but he does slowly get back into praying for his deceased daughter and one day when their young friend named Doris (Kate Corbett) drops by, she goes on to talk about how she remembers Joanie and offers to help out however she can. Later that night, a runaway man who goes by the name of Aaron Smith (Mark O’Brien) comes to Frederick’s house and asks for help as he has hurt his foot. Frederick helps the man recover and allows him to stay the night, even having a late night discussion with him as they learn about each other. While Ethel seems to warm up to Aaron, Frederick begins to have his suspicions about him but they warm up to each other as well to the point of getting a little too comfortable. One day, Aaron requests that Frederick murder him. Frederick refuses but Aaron begins to pressure him into it (does he though?). The more Aaron stays around, the more Frederick looks on his past sins and continues to live feeling disturbed about what he’s committed in the past. He continues to have nightmares and question if he’s really getting help or vengeance from God.

Unlike most horror movies which are filled with action, The Righteous takes a different approach by focusing heavily on dialogue that is the most intense sounding I’ve heard in a long time. The story is well written, and the characters are amazing going from one kind of mood to another to have you on the edge of your seat. Even more interesting is how the whole film is done in grayscale which I seldom see in films, except for maybe a film one of my friends made. Ultimately the whole thing is one of the best horror films that focuses more on characters and not just action. When you watch them get engaged in conversation, it draws you in closer to the whole story and soon you’re enjoying it without knowing what’s to come next. A worthwhile watch.

Be on the lookout for this film as it will soon be out. If you’re in Ottawa or Vancouver, go watch it at your local theatre tomorrow. Or you can wait till the 24th when it releases on VOD.