I have a good friend who’s always reminding me that ‘music makes the world go round’ whenever he hears a great song on the radio. I couldn’t agree more, having been a (coughing) music connoisseur for years. Music has the power to change lives, to bring lives together and provide an outlet for escapism. When is the last time you felt like turning it to 10? My preference is Rock and Country but there’s a flavour for everyone. Elevator music is an acquired taste and I haven’t seen a category at the music award shows, yet. Let’s not forget the whale music lovers out there, on the ocean somewhere looking for a concert. Everyone has a preference and music platforms have provided accessibility within the reach of a fingertip. Every genre, every song, every artist can be enjoyed anywhere in the world. The internet freeway provides the link and we provide the interest.

When you think of the UK, does Country music come to mind? If you said no, you need to reconsider that after hearing Katy Hurt, UK’s newest Country music sensation! She’s been singing since she was 5, was raised on Long Island but moved back to England as a teen. Her parents fell in love with Country music, especially Patsy Clyne and Glen Campbell – resulting in Country becoming a huge influence in Hurt’s life, as she traveled back to England, sharing it with her friends. Call me crazy but I believe Katy had an influence on the UK because there are now 4-5 large Country music festivals held every year over there. Dolly Parton headlined the Glastonbury Music Festival last year and the crowds are always sold out. The jury is out! The UK loves Country music!

Hurt has been with her band – polishing their sound for 7 years. Their first chart stopper was ‘Sounds Good In A Bar’, which debuted at #1 on the UK iTunes country chart, along with being added into rotation at CBC Country Sirius XM and many other Canadian radio stations. She released her second single in Canada on May 20th, Wish I Could Give You Up on all major streaming platforms, Friday, May 20th and it was released to Canadian radio on June 3rd. You may have turned it up to 10 and said to a friend, ‘music makes the world go round’.

“I’ve given my whole life to music since I was a little girl and it’s been an incredible journey of highs and lows. This song sums up my relationship with song writing and artistry… and how throughout the years creativity has become my vice. Canada is my musical home, and I’ve written and recorded some of my favorite country songs there, including this one, I can’t wait to share it with everyone and be back in Canada for Canadian Music Week”.  – UK Country Music Spotlight Award Winner, Katy Hurt.

Coming off the sold out 15 date ‘Sounds Good in a Bar’ UK tour including 3 well-received performances at the popular C2C music festival in London, Ontario – Hurt has been selected to perform at the 2022 Canadian Music Week in Toronto, ON.

Listen to “Wish I Could Give You Up”

Before Hurt reached Toronto and London for Canadian music week, she took time out of her very busy schedule to speak with us, from her home in Liverpool, England. She loves Canada and her overwhelming anticipation for coming here shined through. Roll the tape!

HNMAG “I listened to your new song this morning and your voice is unbelievable, it’s really beautiful! How does a girl living in the UK become a country singer?”

KATY “I was born in the UK but I grew up on Long Island in the US. My parent’s jobs entailed us moving often. I have a lot of family up and down the E. Coast, along the Carolina’s. I spent a lot of time travelling in the US as a kid and that was the music my parents listened to. They loved Jim Reeves, the Elvis Country records, Glen Campbell, especially Patsy Clyne. It was the music played in the house and sang in lullabies. I moved back to the UK and I liked music that none of my friends did, so I was able to introduce them to the artists. When I started singing, the stories really resonated with me and it just happened. I’ve been singing Country music since I was twelve.”

HNMAG “Have you performed the new song live yet?”

KATY “Yes, a couple of times now. I did a festival on Friday called, Bearded Theory Festival. It was also only the second time playing bass, so it was interesting and a lot of fun – playing the bass and the new song live.”

HNMAG “How does Country music go over in the UK?”

KATY “There’s always been Country music in the UK. It’s come over from Canada and the US. It’s a delayed reaction – our Country charts still have Dolly Parton, Islands in the Stream. It’s been fascinating, we got our first Country festival 5-6 years ago and it’s grown massively. We now have 4 or 5 major Country festivals every year with big artists coming over. Keith Urban recently did a tour here, Sara Evans is going to be doing a tour over here and we’ve also had Carrie Underwood coming over. There is actually a rather large UK Country scene here with other artists starting out and its really cool to be part of it.”

HNMAG “Would you say that Country music is as popular as the other music genres or is it still catching up?”

KATY “It’s still catching up but it’s easier now with multiple music platforms like Spotify and Apple that make it easier to listen to. It’s helped to bring it more to the forefront. I would say that most people are still listening to pop and rock. It is definitely getting bigger though for sure.”

HNMAG “Have you ever found yourself performing a set that was 75 percent Country and the rest of the set was another type of music?”

KATY “For the most part, the crowds that we get are pretty hard core. They genuinely love the genre and we have Country specific festivals. I’ve never had to do that for the last 5 years, so it’s been really nice to be able to play my original material for the fans that come out to the shows, as well as being able to be honest, rather than trying to make people happy with other music.” 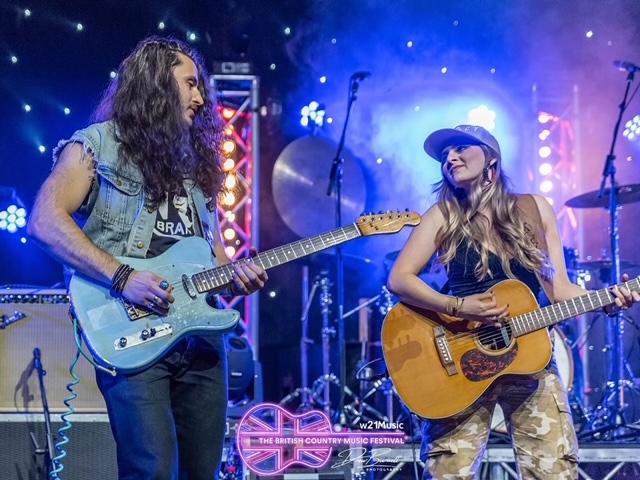 HNMAG “How large of a band do you tour with?”

KATY “There’s normally 4 of us – drums, bass, guitar and myself on guitar and vocals but lately we’ve been doing a couple trio shows where I’ve been on bass and vocals. That’s been a fun experience for me because I get to be more of a musician.”

HNMAG “How long have you been playing guitar?”

HNMAG “Has there been a favourite performance in your music career, in terms of location and crowd?”

KATY “I’ve been very fortunate to be able to play at a lot of bucket list places.  One of the venues/stages we got to play – we opened for Liam Gallagher, which was an interesting mix. Glastonbury Festival is the biggest music festival in the UK and it’s been going on for decades. It’s only held every 2 years and the year that it doesn’t happen, they hold a festival for all the local residents that help to take care of the town all year round. They leave the stages up all year and it’s called the Pilton Party. We were invited to play on the Pyramid stage, which is a huge stage in the shape of a pyramid. We performed for a crowd of about 9000 people. Playing on that stage has always been a personal dream – Dolly headlined it recently and everybody plays that stage. To be able to walk out onto that stage was super special and it was also the biggest crowd that I’ve ever played to. I was terrified and very excited all at the same time. It’s definitely one that stands out to me.”

HNMAG “As the front man/woman of the band, do you engage with the audience much and is there any stage fright?”

KATY “Oh yeah, I engage with them all the time. I started singing when I was 4 and grew up on stage. I used to be in the church choir and did musical theatre as a kid. I was always scared of it but I did it so much that it became second nature. What I’m more frightened of, is performing at the really intimate shows, where there’s not many people because you can see everyone’s faces. I find those more nerve wracking than the big shows. I wouldn’t say that I get stage fright, I just get more excited.” 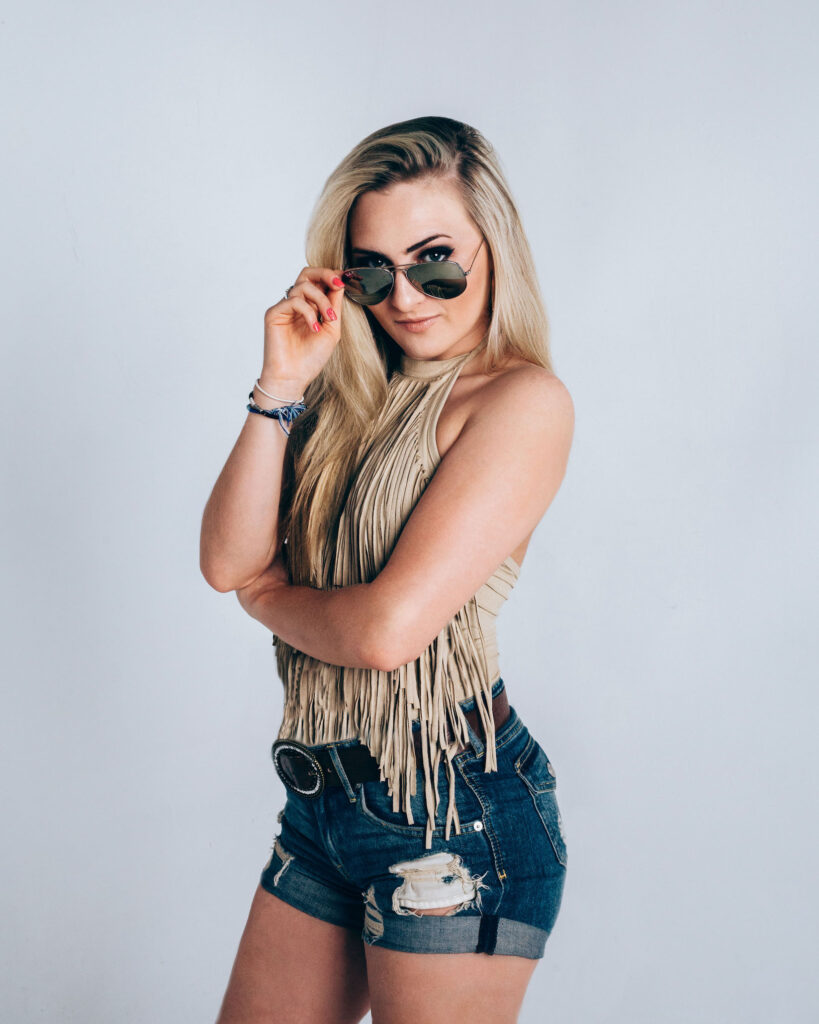 HNMAG “What’s happening this summer with performances and touring?”

HNMAG “How many songs do you anticipate performing in Toronto?”

HNMAG “How many band members will you be bringing up with you?”

KATY “I’m only bringing up my guitar player. I wasn’t able to bring the entire band up but hopefully soon, we’ll be able to do full band shows. I’ve been working with my band for 7 years now and even though the music comes out as Katy Hurt, I’m very lucky that I have a musical family and the musicians I get to play with. It’s been pretty incredible. Gab (guitar player) co-wrote all of my last EP with me and the entire upcoming album. I’ve definitely found a very close musical friend in him and it’s been exciting to work on these projects together.”

KATY “That would be a little trickier. I’ve played the drums before but we’ll see. He’ll have to stay in good health (laughing).”

KATY “I can sing the periodic table. In school, I found it hard to remember things, so I put them in song form to make it easier. (Katy offers a demonstration) I need to learn how to juggle (laughing).

As far as Country music talents go, Katy has earned a seat at the table. Wish I Could Give You Up has all the ingredients for a Country hit! Listen to it, buy it, support it and share it! Thank you Katy Hurt!