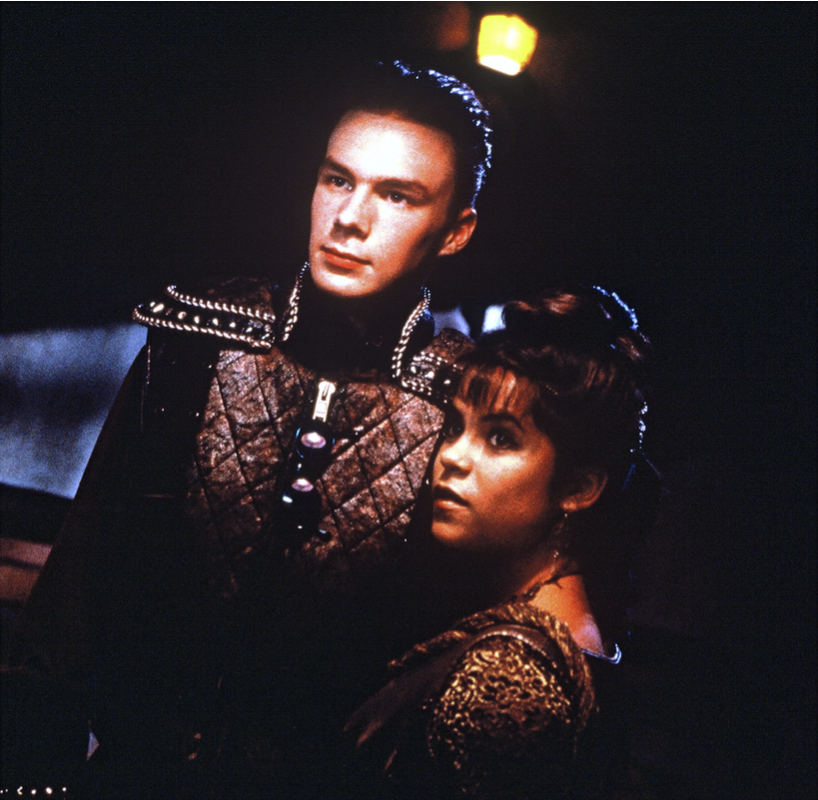 By the end of its second season, The Odyssey had come a long way from the modern-day mythical quest first dreamed up by Paul Vitols and Warren Easton five years prior. The mind-bending adventures of a young man on a journey through his subconscious had scored with viewers, but the key plot element of having principal protagonist Jay Ziegler in a coma for half of each episode’s runtime had worn out its welcome with the network and pressure from above forced the showrunners to get creative.

“We had to keep a lot of people happy.” says Executive Producer Michael Chechik. “CBC was very clear about the notes they wanted us to respond to.” With some measure of stability established between the two worlds of the show at the end of the previous season, the decision was made to have Jay come out of his coma in the waking “Upworld”, but still maintain his adventures in the subconscious “Downworld”. It was a decision that would challenge and puzzle the show’s young viewer base.

“What we were trying to do was deal with the fact that his Upworld and his Downworld were coming closer together and starting to mix, bleeding through into each other.” recalls Showrunner Charles Lazer. “Once the decision was made that he’s come back, the belief was that you could tell both stories.” adds Story Department Coordinator James Tichenor.

Jay’s awakening would shift the balance between the two realities in Upworld’s favour. Beginning four months after coming out of his coma, the third season finds Jay (Illya Woloshyn) still struggling to adjust to normal life after nearly two years unconscious. He seems unable to truly confide in anyone. Not his mom Val (Janet Hodgkinson), friends Keith (Tony Sampson) and Donna (Ashley Rogers), nor even his new therapist Sy (Jay Brazeau), who has his hands full with the hormonal teenager.

“These young actors were driving cars, interested in girls and it was a different world.” says Chechik. Like the seasons before, the cast continued to mature and the look and storylines grew to match. Episodes would touch on dating, wild partying, youth crime and parental abandonment. Jay himself was no longer the steadfast, determined protagonist he was once was as both realities found him moody, short-tempered and insecure. But then again, who isn’t at 14?

As Upworld gained more prominence this season, some familiar faces from Downworld began to populate it. While Andrea Nemeth had joined the Upworld cast as former coma patient/celebrity Sierra Jones in the previous season, this batch episodes saw such Upworld counterparts as Mick (Finger), Lee (Macro), and Nathan (Fractal). “It was nice to be in the Upworld!” remembers actor Jeremy Radick. “I think Nathan was less sharply defined, and some of that was probably my fault. I deliberately played him like a lot of entitled fanboys I knew in the world of comics and I think that made him a bit harder to like. Just being the manager of the comic shop where the kids hung out meant there wasn’t always a ton of stakes to his interactions with the main cast. I did love how we didn’t back off on the look or intensity of him at all, which meant that I thought that Nathan was the only Upworld character that was almost as odd as his Downworld version!”

Meanwhile. the Downworld of Season Three was a darker, nastier place than the fantasy-tinged trappings of the previous seasons which ironically made it a closer match to the more apocalyptic vision of Vitols and Easton months after they had left the show. The Tower sets were grunged down, costumes were reimagined and much to the chagrin of network censors (at least in the UK where several episodes had to be cut down), the violence quotient was amped up with bladed weapons and threats of death thrown about with reckless abandon.

Without the waking-from-coma goal to energize it, the Downworld sequences were left treading water for most of the season, leaving Jay uncertain as to a goal. Does he try to cross the Wall again? Should he stay or should he go?

His longtime friendships would be tested with Alpha mostly retreating from the usual adventures to focus on “knowledge prospecting” (Guess that Library club membership expired) and even steadfast friend Flash finds himself at odds with Jay several times including an early season bare-knuckle brawl. “We were  in a cage match kinda thing.” says Flash actor Tony Sampson. “It was pretty intense. Days inside this trampoline cage wrestling and everything else, that was fun.”

If this weren’t enough, Jay’s rivalry with Finger (Mark Hildreth) is amped up to eleven when the Head Monitor usurps control from Macro (Ryan Reynolds), the latter whose character is resigned to the same offscreen wasteland as Happy Days’ Chuck Cunningham and Family Matter‘s Judy Winslow before him. Finger promptly sets his sights on Medea (Andrea Nemeth) whom Jay has also fallen for. This same love triangle is also reflected in the Upworld between Jay, Sierra and Mick. The season finally gains some traction in the final few episodes when Downworld Jay decides to form a rebel alliance to topple the oppressive Tower regime (and donning a ridiculous General MacArthur outfit in the process). Meanwhile in Upworld, Jay finally manages to locate his Dad (Robert Wisden) after their brief encounter the previous season. But it won’t be an easy family reunion as Val has attempted to move on with her new fiance Steve (Andrew Airlie).

Sonically, the show was given another boost as longtime series composer Michael Conway Baker was replaced with Toronto-based maestro Fred Mollin. “They had heard some of the things I had done on shows like Forever Knight and Friday the 13th: The Series,” remembers Mollin, now based in Nashville “and I think they liked that darker kind of angle.”

The show’s memorable Mission Impossible-inspired theme would also be replaced here. “My memory was they just wanted to go to a slightly more percussive, more gothic sort of sound.” continues Mollin. “I tried to do something memorable. It was a repeating pattern that would be sort of hooky, had more impact.”

“I was left with 5 or 6 days to write and overdub and mix to picture. I would (then) send a digital audio tape to CBC in Vancouver and they would drop it into the actual film dub. They would mix my music along with the sound effects and dialogue. But I wasn’t there, I was based in Toronto, so it was an interesting long distance scenario. I was very much on my own.” Fractal (Jeremy Radick) continues to churn out dangerous inventions in the name of science.

All this work culminated in what turned out to be the series’ final episode, Time Bomb. The Upworld story has Jay finally prove to Val that Brad is still alive while Downworld finds Finger reeling from his defeat at the hands of Jay and his rebels. Seething with revenge, he plants a bomb in the Wall separating kids from adults in the hopes that the latter will overrun the former. Jay and company fail to stop the bomb going off, but Finger’s plans are dashed when the adults refuse to cross the boundary. “Adults are just as afraid of us as we are of them.” Jay stoically remarks as the final freeze frame fades out.

“You know, that’s a great line for a kid.” says Lazer. “When you realize that, I think you’re making a step towards growing up really.”

“I had friends who thought the final episode was an unsatisfying conclusion,” adds Radick “but I love it. To end with these children who have really started to outgrow childish things finally break down the wall between them and adulthood and just wind up staring at this unknown, scary future. I’m not sure how else it could have ended, really.” In any case, the show had ended with another cliffhanger but viewers would have to content themselves with the 39 episodes produced. “There were plans for a fourth season.” says Janet Hodgkinson. “Contracts had been negotiated and then (the show) was abruptly canceled.”

“We were always hoping for another season.” says Chechik “But I think it was that the kids were getting too old. The numbers started falling in the third season.”

Whatever plans were mulled over for another season didn’t get very far. “There were no scripts written for Season 4 because there was no money and Leila (Basen) and I were pretty much opposed to writing on spec.” says Lazer. “We talked about it in the room for a few days and we might have had a couple pages of something. We’d have shared if someone came up with some money!”

After Time Bomb aired on Dec 26 1994, the series would then go into reruns on CBC weekdays at 4pm (where this author first discovered it) before eventually moving to weekday evenings on YTV gaining new legions of fans along the way.

“I know it was a great show.” Hodgkinson recalls. “I would walk through my kid’s school and I would wonder why the kids were looking at me like I was cool or something. Then I remembered they probably watched the show!”

“There seems to be a lot of fans out there.” adds Lazer. “When I would work on shows like Lost World or Beastmaster, The Odyssey was the show those fans latched onto.”

“I thought it was as fun as hell personally, the whole thing.” Sampson fondly recalls. “I had lots of fun with everybody there. I (still) talk to Illya sometimes. I think he’s doing his music or something.”

As the fandom grew, there was sufficient interest for Omnifilm Entertainment to attempt a reboot of the property in 2016 with writers Simon Racioppa and Richard Elliot, but “Nothing happened with it.” says Chechik. “They came up with some ideas that they presented and we realized the budget would have to come right down. So they tried to simplify it but I don’t think it went anywhere.”

Bun fans new and old alike would have a chance to rediscover the series long after it left the airwaves when the Cancon vault of Encore+ posted the entire series on its Youtube Channel in 2018 where it continues to attract healthy views.

“There’s a lot of people I’ve run into over the years that really love that show.” says James Tichenor as we wrap up our interview. “It’s one of those cult Canadian favourites.”

The Odyssey: Season Three can be viewed on the Encore+ YouTube channel HERE.