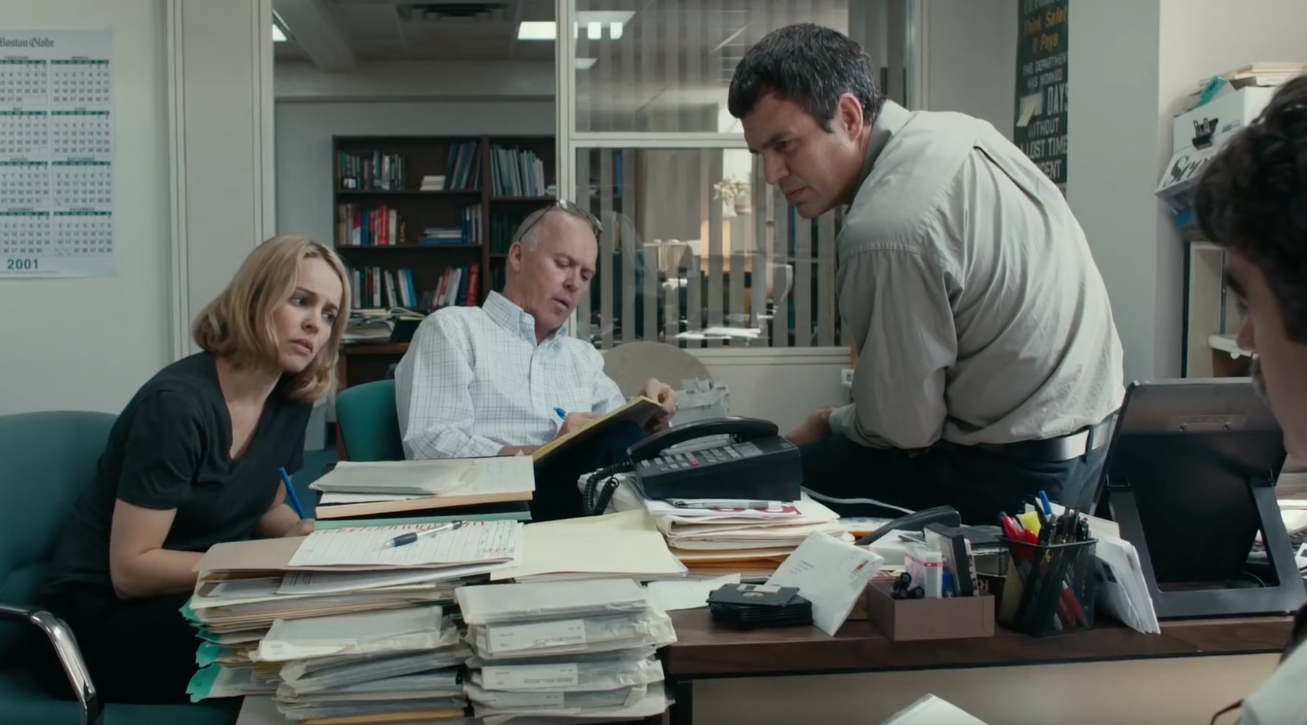 Winning the Academy Award for Best Picture can sometimes be more of a gift than a curse. Past winners like Crash and Slumdog Millionaire may have garnered critical praise upon initial release, but they might be more fondly remembered today had they not won the Best Picture award, as there is a growing consensus that they were ultimately undeserving of the accolade. But then comes a winner that ticks every box; a winner that is such a resounding cinematic achievement on every conceivable level, its worthiness is unquestionable. Tom McCarthy’s Spotlight is one such film.

About midway through McCarthy’s film, a priest reflects, in conclusion to an anecdote on the internet, that “Knowledge is one thing. But faith…faith is another.” The clever use of antithesis by McCarthy and co-writer Josh Singer aside, this is a shrewd encapsulation of the conflict of ideals at the heart of Spotlight. The film retells the true story of the small group of investigative journalists at the Boston Globe who, in the early 2000s, exposed the Catholic Church’s systemic cover-ups of sexual abuse carried out by priests in Boston. Led by their editor Martin “Robby” Robinson (Michael Keaton), the Spotlight team work together to collect the increasingly shocking evidence of conspiracy within the church, while attempting to battle the innate resistance of the larger Roman Catholic community, many of whom cannot fathom such largescale conspiracy.

The highest praise I can offer this masterpiece is that the structure of its storytelling is reminiscent of Roman Polanski’s Chinatown, of which the screenplay by Robert Towne is considered the epitome of modern screenwriting. It takes multiple viewings to appreciate the true depth of McCarthy and Singer’s screenplay, whose approach to unveiling each hard-hitting fact is as conscientious as it is deliberate, making for an enthralling watch akin to a documentary.

McCarthy could not have captured this feeling, however, without masterclass direction and immense performances from his cast. With regard to the former, McCarthy has never been better as a director.

His visuals are engrossing at all the right moments, as the cinematography adds dramatic weight to what are already shocking revelations, allowing audiences to fully comprehend their resounding significance. In addition to this, McCarthy’s visuals manage to tell another story in almost complete silence, as there are comparative allusions made between the church and the Boston police force, as well the media themselves, who share a degree of culpability in failing to act.

Although I have already mentioned the strength of Spotlight’s cast, particular praise must be given to Keaton, Mark Ruffalo, and Ontario native Rachel McAdams, with the latter two actors receiving Academy Award nominations for their work. Keaton’s Robby is an admirable character with clear understanding of the journalistic process, but can also be blinded by that very process, leading to a well-hidden sense of guilt that is fleetingly revealed by Keaton. Ruffalo’s Mike Rezendes and McAdams’ Sacha Pfeiffer, then, are the emotional centres of the film, who are compellingly torn between the objectivism of journalism and their own personal ethics, leading to some of the film’s most relatable moral dilemmas.

Spotlight is absolutely deserving of every accolade it has received, and I believe in later years it will be recognised not just as a magnificent instance of top-tier filmmaking, but also further proof that filmmakers need not drape their heroes in gold to make them shine. Fallibility is a trait that can either be misconceived or outright neglected in today’s cinematic climate of predominantly black-and-white morality, so it is always refreshing to encounter a film like Spotlight, whose white gives way to hints of grey in dramatically evocative manners.