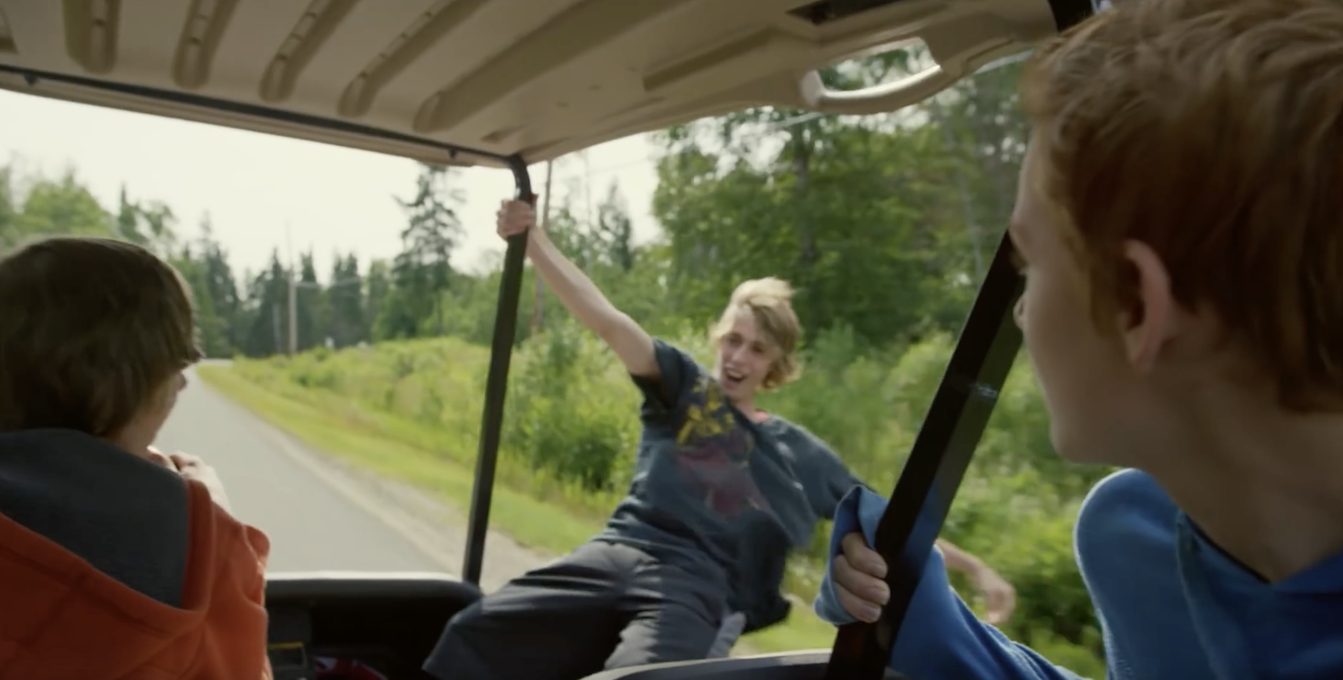 If a filmmaker attempts a coming-of-age story, and their name is not John Hughes, then they are facing an immediate uphill struggle toward sincere originality. This makes it all the more refreshing, then, when I encounter a film that is not only fearless in its pursuit of a distinctive voice, but actually succeeds in finding it.

In this vain, few films are as fittingly titled as Sleeping Giant. Not only does it metaphorically encapsulate numerous themes seamlessly entwined within the Andrew Cividino drama, but the title also aptly describes the discreet brilliance of this filmmaker’s feature film debut. In fact, I would go so far as to say that Sleeping Giant is one of the most deceivingly complex coming-of-age features I have ever seen.

Set in the northern region of rural Ontario, three budding friends Adam (Jackson Martin), Nate (Nick Serino) and his cousin Riley (Reece Moffett) enjoy their summer together, very much personifying the mantra “boys will be boys.” Being three teenagers on the cusp of manhood, this summer proves to be a transformative one, as each of the teens learn more about themselves and those around them, which is made ever more complicated by their emerging sexualities.

Make no mistake, Sleeping Giant is as emotionally and thematically complex as the description implies, anchored, first and foremost, by its natural writing and complementary performances from the film’s young leads. As such, this is the type of film that can be aptly described as greater than the sum of its ever-shifting parts. To elaborate, there are several plot elements that work not just as sequences for developing the characters of the three leads, but also as seemingly unrelated plot threads that converge into one pivotal event late in the film.

Most impressively though, the implications of this event are more delicately understated than it may initially seem.

The writers masterfully connect the dots so that everything that comes before, which is already drenched in substantive meaning, becomes infinitely more significant. Much like the leads, we are then left with the what ifs, cruelly exacerbated by the ruminations of hindsight. This is true of several characters who each carry the burden of what happened, but in actuality it is those who assume no responsibility, indirect or otherwise, that are unwittingly the most culpable.

Though prior to this all this, or at least before the awakening of one teen’s homosexuality midway through, Sleeping Giant could have succumbed to the seemingly arbitrary nature of its early narrative, yet it is offset by Cividino and James Klopko’s cinematography, which acts as a consistently engaging reminder of the weight that each scene carries. This visual creativity is unrelenting too, as Cividino rarely ceased to surprise me with a cinematic language that is, at once, enthrallingly expressive but seamless enough that it never blatantly holds your hand.

This brings me to another large reason why film works so well, which is Cividino’s auteurist direction. The filmmaker’s acute understanding of the script he primarily wrote is plain to see, with a sure-handed grasp of the material that suggests Cividino knew how he wanted to shoot the film before so much as putting pen to paper. His work on Sleeping Giant is reminiscent of Noah Baumbach’s skill for inducing a sobering sense of immersion, paired with a subtle touch of Wes Anderson’s uncanny ability for visual preconception, yet in no way is it reductive.

However, let not my unreserved praise for this resounding dramatic achievement cloud the fact that it falls short of being a masterpiece. While it comes pretty damn close to this status, the runtime is a trim hour and a half, which would have benefitted from some extra runtime to round off a minor plot thread or two that feel noticeably unfinished.

Still, this is a small quibble on a distinguished debut from an undeniably talented director. As it stands, I believe Andrew Cividino potentially possesses one of the most distinctive auteur voices in modern Canadian cinema. His style may not be as distinctive as Guy Maddin’s postmodern sensibilities, nor is it as strikingly vibrant as the theatrical visuals of Xavier Dolan, but Cividino’s singular eye is unmistakably that of an auteur, and it is early yet in this nascent director’s career.

Check out Nick’s opinion, a blast from the past on this particular film when it premiered at VIFF 2015.