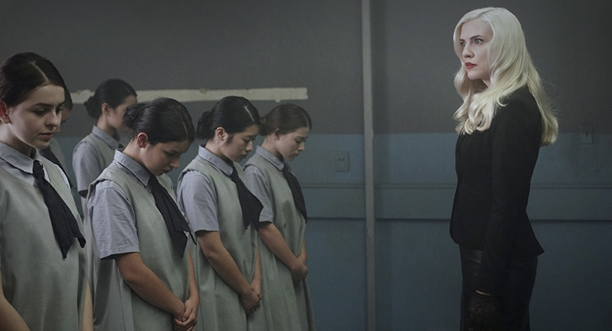 It has been a stellar year at VIFF for female talent with standouts including Carly Stone’s superb Gen-Z romcom The New Romantic (reviewed here) and the stellar cast of Bruce Sweeny’s Kingsway featuring Leo-worthy turns from Camille Sullivan and Gabrielle Rose. But possibly the best kept secret of the festival can be found way back in the genre-bending ALT section of the VIFF program guide; Danishka Esterhazy’s timely sci-fi thriller, Level 16.

Set in a secure, sterile facility, the film centres on a group of young women raised since birth to be clean, obedient, do chores and not much else; not even to read or write. They endure this mundane routine in the hopes of one day being adopted and finally experiencing the love of a family. Their faith seems to have paid off when they graduate to the 16thlevel and strict facility headmistress Ms. Brixel (Sara Canning) presents each of them with new pretty dresses along with the promise that couples will soon arrive to begin the adoption process.

But doubt is sown when the strictly by-the-book Viven (Katie Douglas) is convinced by her childhood friend Sophia (Celina Martin) to stop taking the so-called “vitamins” dished out by the facility physician Dr. Miro (Peter Outerbridge). Viven is immediately thrust through the looking glass as the facility’s true purpose becomes all too clear. Going against a lifetime of indoctrination, Vivien and Sophia must now fight to escape their fate, lest they become just another statistic in their captor’s brutal chess game.

“I wrote the first draft a little over 10 years ago. I was really inspired by the idea of creating a science fiction story about young women.” relates Writer and Director Danishka Esterhazy as we chat along with cast members Sara Canning and Celina Martin in downtown Vancouver. “ I love sci-fi, because it deals with really important themes, it makes us examine the human condition, it makes us look at our own society, but it does it in a way that really allows us to engage emotionally.”

The audience was certainly engaged at the VIFF screening I attended at the Rio Theatre where cast and crew were also in attendance. The film has had a long road to production and completion (ie: funding issues), but it’s warm reception here and at it’s world premiere at Fantastic Fest in Austin, Texas suggest that filmgoers are ready and eager for more female-lead genre stories on their screens.

“It’s interesting that in a lot of the reviews and the way people have been speaking about the film, it’s been touted as a sort of timely story.” says Sara Canning, reflecting on the film’s reception thus far. “I think it’s because we’re seeing more projects in this sort of vein and that there is a real spotlight on the oppression of women in general within this industry of television and film.”

A project containing major themes including indoctrination, oppression, miseducation, gender roles and how they influence femininity require a talented cast to pull off and this ensemble was more than up to the task. “When it came to casting our leads Vivien and Sophia, it was looking at lots and lots of taped auditions from across the country and really looking for actors that just had something very special, whose personality could really shine through the role.” Esterhazy recalls about the casting process. “I was very lucky because I got to meet Celina who plays Sophia and also Katie (Douglas) who plays Vivien. I think together they have great chemistry.”

“Doing the backstory of Sophia, I did some research on girls who were in confined spaces who experienced oppression.” says up-and-comer Celina Martin. “I searched up labour camps and girls in prison. So it stemmed from the research on that as well as my past experience growing up.”

Level 16 is only the second feature for Esterhazy, having previously helmed the award-winning 2009 historical drama Black Field, which also starred Sara Canning. If early reception is any indication, this sophomore feature was certainly worth the wait. “At it’s core, it’s really a story about friendship.” Danishka tells me as we wrap up our interview. “I think the friendship between young women is a beautiful and powerful thing and that when young women come together they can change the world. So I hope that story of friendship will touch people.”

Level 16 will next screen as part of Brooklyn Horror Fest on Wednesday, Oct 17 @ 7pm EST