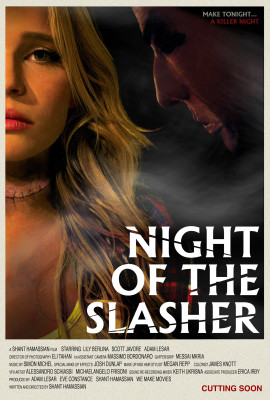 What can you accomplish all in one take? This short film explores the whole concept of a single take. I’ve been on several short film shoots like that, and man, those can be tedious.

First off, it starts with our protagonist Jenelle (Lily Berlina) playing some music in her house without wearing any pants. Suddenly, somebody knocks at her door and she answers it, to find a boy (Scott Javore) she’s dating. He’s carrying a four-case of beers and is a little unsure of how to approach Jenelle. She ends up drinking three and half of the beers. Mainly because it’s on her checklist of things to do.

Right after that, Jenelle escorts her bait over the couch where she smokes a cigarette and then proceeds to get it on. It turns out all the items on her checklist were intended, for some reason, to lure in a killer (Adam Lesar) wearing a plastic mask that resembles Spock. Anyways, our Vulcanesque murderer stabs the boy in comical fashion, and proceeds to head for Jenelle next, who despite getting the upper hand, finds this killer to be unkillable. How it ends, well… strange.

It’s hard to believe this could be done all in one take. It must’ve been strenuous. I give some some serious credit to anyone involved with this as it must’ve taken a long time to get it right.

Even better was how the lighting, blood spatter, effects, and dialogue were absolutely perfect. The story was a little awkward, and some of the actions were a bit on the cheesy side, but the film manages to hold up pretty well.

We were provided with a private screener for this review, however it reflects the reviewer’s unbiased opinion.