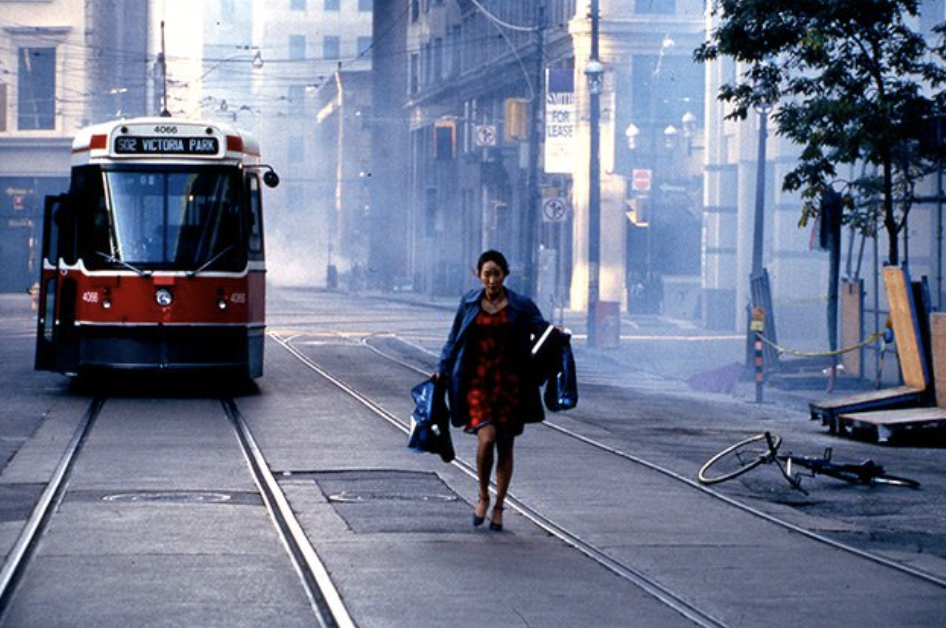 The anxiety around Y2K seems almost quaint 20 years on. It turned out  to be just one of many end of the world predictions that failed to materialize including the more recent Mayan-favourite endgame of 2012. The lack of real world results has never deterred artists from examining the implications around these would-be disasters and as we celebrate a Covid-induced virtual National Canadian Film Day, I felt compelled to finally unearth a title recommended to me by the Encore+ YouTube Channel, Last Night.

Inspired by “2000, seen by…”, a project asking filmmakers from 10 different countries to offer perspectives on Y2K, Don McKellar’s debut feature tweaks the request and plunks us in a world 6 hours away from an unexplained armageddon and resigned to its fate. Patrick (McKellar) is determined to spend his last moments alone in the wake of his wife’s premature passing. His childhood buddy Craig (Callum Keith Rennie) works through the most perverted bucket list this side of Barney Stinson and Sandra (Sandra Oh) planned to go out on her own terms via double suicide with her husband if only the now-lawless streets hadn’t trashed her 1972 AMC Pacer.

These stories begin to interweave as Sandra disrupts Patrick’s solitude hoping for a ride. He’s short a vehicle at the moment but suggests they steal a car because why not? And if that doesn’t work, there’s always Craig’s classic auto collection. Whatever happens, they’ll need to make the most of the precious remaining minutes ’till doomsday. “See you.” remarks Patrick as he bids farewell to Craig. “No you won’t.” Craig replies.

The cause of the world’s end is never elaborated on (the neverending daylight suggests a cosmic reckoning) but that’s not really the film’s point. McKellar offers a glimpse of a world that has to literally live a day if it’s the last, only this time all in unison. Some will find love, others lust. Some will cave to their worst impulses and others will party on ’till the end.

It’s a lot to digest and it helps to have actors who are up to the challenge. Oh positively radiates as the luckless Sandra and damn near breaks your heart at every turn. It’s little wonder she’s gone on to award-winning success down south. Her fellow Double Happiness co-star Rennie cuts a fine portrait of an overly adventurous sex addict. Just disturbing enough without totally putting audiences off.

McKellar is sadly lacking as the mopey leading man (90s-era John Cusack would’ve knocked this out of the park) but more than makes up with his capable direction featuring a fine cast, solid world-building and a smooth soundtrack (appropriately featuring Edward Bear’s Last Song) fed via offscreen DJ Wolfman Jack-style.

Last Night was apparently eclipsed by Meet Joe Black in many theatres during its Canadian general release. Whether this was due to audience apathy or theatre programmers disregard for Canadian cinema (probably both), it remains a shame it happened to a picture with such promise, frayed edges and all. But if you’re going to spend these quarantined Covid days seeking out new things to stream, Last Night is well worth the timely rediscovery.

Last Night can be viewed here on the Encore+ YouTube channel