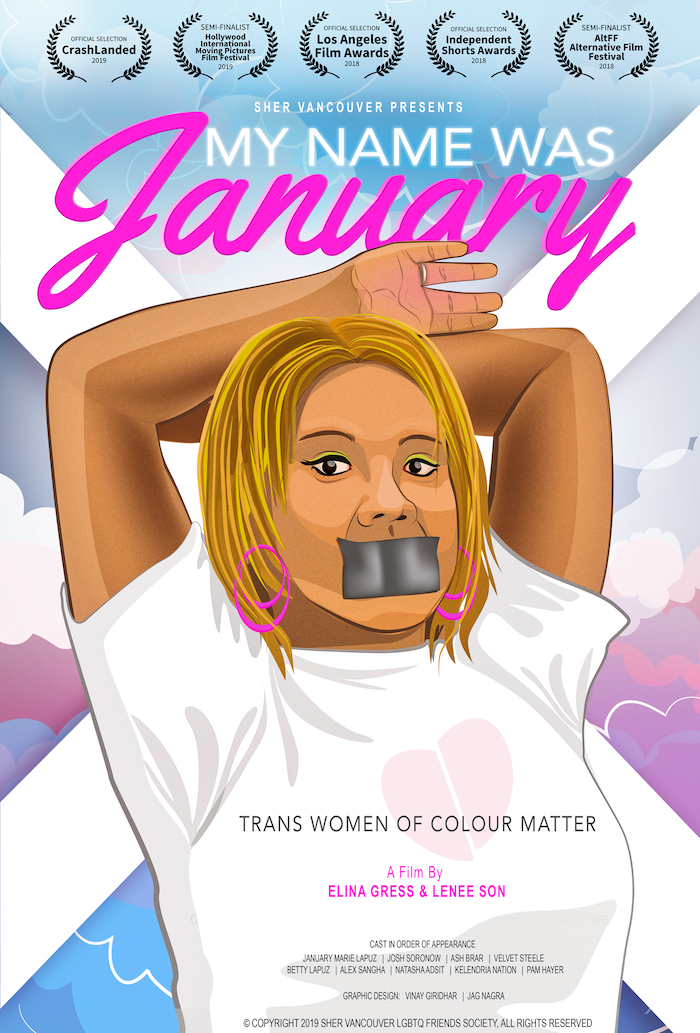 Many have heard the story of January Marie Lapuz, as she got murdered in her home in New Westminster. Being a resident in that area myself, it saddens me to hear when a local resident has died. But what’s even more upsetting was that she was a trans woman. Many people were affected, and said people share their stories and experiences on how they remember January in a heartwarming little documentary by Elina Gress and Lenee Son along with Sher Vancouver LGBTQ Friends Society, which helped to produce this stunning work. Sher Vancouver’s founder Alex Sangha does a good job talking about January’s impact along with January’s other friends Josh Soronow, Ash Brar, Velvet Steele, and Pam Hayer. We also hear from January’s mother Betty Lapuz, and social activists Kelendria Nation and Natasha Adsit. Everybody involved tells not just stories on what happened the gruesome horrible night, but they also discuss transition and survival sex work, and even how January was a positive impact for everyone.

Interviews while brief, really pull at the heartstrings and make you feel like you wish you had someone as warm as January herself. The documentary is done with simplicity, but the feelings it generates are so powerful it impacts you in a way nobody would feel. Arrangement of the stories had them well put together and everything about it seemed so genuine. Not only does it make you feel sorrow, but you want to stand up for trans women because there shouldn’t be such dreadful things happening to them. The emotions invoked within the short documentary have already won it quite a few awards like the Best Documentary Short Film Award at Aphrodite Film Festival, an Award of Recognition in the Best Shorts Competition hosted in La Jolla, California, Best Picture and Best Poster at the West Coast Film Awards in Malibu, Best LGBTQ Film at Los Angeles Film Awards, and even the Gold Award in the Best Documentary of the LA Shorts Awards. There are many more awards sure to be coming in by the judging of the route this documentary is going. My Name Was January is currently available in DVD and Blu-Ray format through Moving Images Distribution of Vancouver. A lovely short documentary to be treasured, be sure to keep an eye out for it at any film festivals you attend.