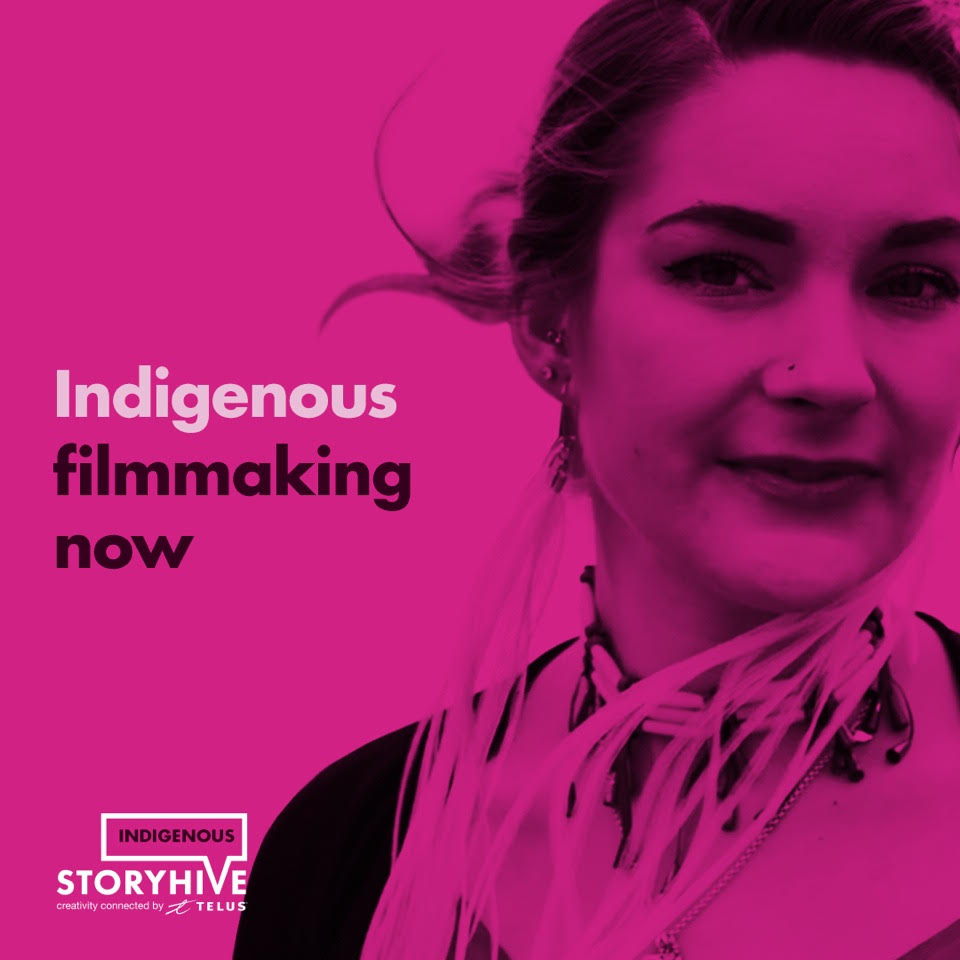 For many of us our history in Canada only goes back one or two generations. For example, my grandfather came over from Germany escaping the Nazi’s. Many Canadians share the same similarity with their grandparents/parents having emigrated from outside of Canada. Given that fact, it doesn’t amount to much history and heritage for a large part of the population. However, there are Canadians that have been here 10, 20, 30 and even more generations.  They are our First Nations People. The history that they have accumulated in Canada far precedes any other Canadian.

Telus Storyhive has launched their first Indigenous Edition for the Indigenous population in the hopes of tapping into some of those historic stories. Considering the amount of television and movies that have been made, the Indigenous community is poorly represented. We’ve all seen the Hollywood westerns where Italians or other ethnic groups are playing American Indians. Having more accurate representation is long overdue. Thanks to the new initiative that Telus Storyhive has recently launched, the game is about to change.

I recently had the privilege of speaking with Tracey Kim Bonneau, one of four members of the Indigenous Advisory Council. Together they have been given the task of choosing the talented twenty Indigenous artists that posses the vision, the story and the planning to complete a creative piece of cinematic art that will represent First Nations people and their heritage. Each filmmaker will receive 20,000.00 plus a top-up fund from Creative BC to complete their projects. The contest is open to BC and Alberta residents. Other members on the Advisory Council include Rylan Friday (storyteller, writer, producer), Shady Hafez (writer) and Doreen Manuel (Filmmaker and Program Coordinator for the Indigenous Independent Digital Filmmaking Program at Capilano University).

“How was the idea of this contest conceived?”

“Telus Storyhive had approached the Indigenous community. They had invited a group of Indigenous artists to Vancouver last spring to talk about the idea of doing an Indigenous Edition. They wanted to discuss what that might look like, what we would like to see happen, what are some of the barriers we might face in terms of getting the work on screen, creating the work and getting support for the work. It was a one-day session. It was a great session, meeting all ages of filmmakers, performers, music video artists. The artists range from different parts of the lower mainland and other areas of BC.”

“What does this representation mean to the Indigenous community?”

“This opportunity has been a long time coming and my hat off to Telus Storyhive for making this opportunity possible. If you turn on your television, if you go to a movie theatre, if you go online what do you see in terms of television and entertainment about Indigenous people made by Indigenous people with Indigenous storylines and characters? The number is very very low. Another thing that is very unique about these submissions is that the selection process is not based on the previous model of collecting the most votes to qualify through to the next round. What we had decided as a council was to accept the projects based on artistic merit and project plan. Telus said okay.”

“What type of criteria will you be looking for within the submissions?”

“This contest is solely open to Indigenous artists that will hold a prominent position on the production team. We want these films seen around the world. Films that are directed and produced by Indigenous people.”

“How was the Indigenous Advisory Council selected?”

“I’m really not sure but do know that Storyhive had recently hired a new Indigenous coordinator by the name of Kristy Assu, who works in the lower mainland and was a graduate of the Indigenous filmmaking program in North Vancouver. Kristy had reached out to me, possibly because I’m a veteran filmmaker and is aware of the work I do. I said absolutely!”

“Do the filmmakers retain ownership of the completed films?”

“Our responsibility as a council was to look over the forms and determine the eligibility requirements and sensitivity of issues, such as intellectual property. It was important to the artists that once completed, the work belongs to them and if they desire, they can shop it around and share it with the world. Telus had agreed to the request in addition to providing the financial support. The artists will be free to seek out a distributor, build their portfolios, get exposure on film, TV, film festivals and the internet programming scene. The American Indian Film Festival in San Francisco is an International festival that can help to provide much exposure and awareness.”

“Will Telus Storyhive be promoting the finished projects?”

“Absolutely; once the projects are completed they’ll be shown on the Storyhive platform online.”

“Is there an age limit for individuals submitting?”

“I believe it’s 18 plus. It may be because you need to do a legal chain of title, there’s lots of paperwork as well as training that goes long with it, not to mention the three phases that all must participate in. One is the pitch, the next is the submission and the third is the one-day training session provided for the selected twenty.  Once selected, the session will serve to assist everyone with the time frame and a contingency plan to ensure every project gets completed on time.”

“What types of stories will be best supported/accepted?”

“There is no preference for any stories to be supported. What is considered is; can they complete the project, how passionate are they about the project, what kind of team can they put together to complete the project and are they meeting the criteria as outlined in the application. We’re looking for good storytelling and if the audience will get a feel for what the story is about. The possibilities are really endless in terms of what form the projects are created in, such as visual, video, film or online format. In terms of projects ineligible for funding, that would include projects dealing with propaganda and politically motivated films that only serve the mandate of changing public opinion. Those types of films do not fit into the ‘art’ criteria.”

“Is it your hope to aspire other First Nations youth to become more involved in making Indigenous films?”

“I absolutely think that a career like this is an exciting one because the stories that can be told can help the individual artist themselves in terms of knowing they now have a medium to tell their stories. The other side of that is the negative perception of Indigenous people. It started with the Hollywood westerns, where Italian people were cast as American Indians. They were portrayed as killers and people you needed to be afraid of as well as other stereotypes. Hollywood still applies the same practices when casting. It’s rare that you see an Indigenous person playing a mainstream role as a member of the community. By young people getting involved in film, they have an opportunity to help educate society on the amazing things we’re doing in the Indigenous community, in our homes, in our schools and elsewhere. In addition, these artists have the opportunity to have the funds to empower their stories. They will be authentic and made by Indigenous communities. It’s really incredible that these stories will be shared with Canadians, that’s something we can really be proud of them for.”

Tracy is a documentary filmmaker that has been working with filmmakers for a very long time. She spearheaded her first film at the age of 15 entitled Cause For Alarm. It was an educational film written and created by Indigenous youth. The project looked at the dangers of LSD, marijuana and alcohol use. It was that film that made her realize that film could communicate to a wider community and her own reserve about the dangers of drugs and alcohol. She’s made many short films with communities throughout BC. She says that every time a project is created you see the life of the community come together. She remembers a time approx. 15 years ago when she had travelled to a northern community with a projector and speakers in tow.

“The elders were so amazed by the projector and the sound. It was like creating a theatre inside of a band hall. Some really powerful stories came out of it. If Canada loses its heritage of Indigenous people, we all lose. This is not just for our own artists; it’s for everyone to understand. This is your country and you should participate in it by supporting Indigenous artist’s so they can tell their stories. That means going to the screenings, inviting them out, opening those doors and funding them. Good things will come from it.”

I for one am very excited to see an incentive like this. As a filmmaker I know the difficulties of financing the kinds of films with stories you know will impact an audience. Giving the keys to twenty talented artists telling Indigenous stories is something our country can benefit from, as well as the world.