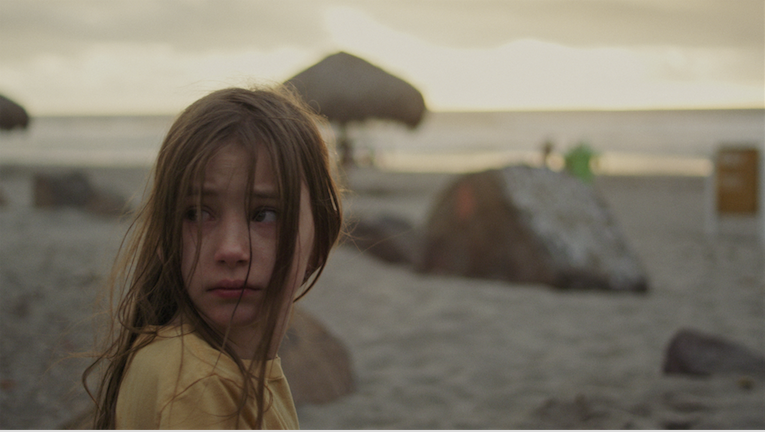 Ah, Father-Daughter trips. A common concept in short films and features. I’ve seen it in films at VIFF, VAFF, my early days of reviews, and maybe VSFF?. You get the idea, daddy-daughter movies. Or movies that involve being on the road. Those kinds.

This one’s a little different, because the daddy-daughter duo of Stephan (Florin Peltea) and Eva (Dalia Binzari) get into Stephan’s 18-wheeler trick for the longest (bad pun intended) road trip to Mexico. The road trip consists of radio karaoke, driving through the States super quick and finally making it to a beach in Mexico. We don’t get a whole lot of very long shots, just quick few-second and less-than minute shots. But it’s not only lacking to the eye, because the trip isn’t all as fun as expected to be. They don’t spend too long at the beach as originally supposedly planned, the overnight sleep in the hotel is interrupted by late night fireworks, and when Eva wakes up, she discovers her father is missing which then causes her to search for him on a journey of- just kidding. Eva just waits for him. While waiting she watches cartoons, eats some snacks left out for her, colours in her colouring book, and then finally Stephan comes back, explaining that he had some work to do. Turns out father of the year made the trip only less than a day worth and they have to head back to Montreal already. Yeah, you can imagine the disappointment for the poor little girl. In fact, all Stephan does is work. What does he do for work? Eva decides to find out one night. All I can say is that it’s something confidential which somehow dilutes his daughter’s perspective and things don’t get better later on with the border control.

To most people, it may not seem like much of a film, but it has some very deep feelings involved with the two who spend close time together in what little time they have. It also focuses on another subject of people who struggle which so many never seem to pay mind to. Which is probably why it’s being considered for an Oscar and why it won the Crystal Bear for Best Short Film at Berlinale 2019 and top prize at Regard Saguenay International Short Film Festival. The characters are ones you can connect to in such a short and simple amount of time, the visuals are a mix of ominous and interesting, and you can really understand the struggles of two different lifestyles. Sandrine Brodeur-Desrosiers really is getting far with a film like this, using just as little to let us know about something big. Speaking of big, she’s already making two features as we speak. A well made film that’s doing well and making history, Just Me And You is a whimsical delectable short.