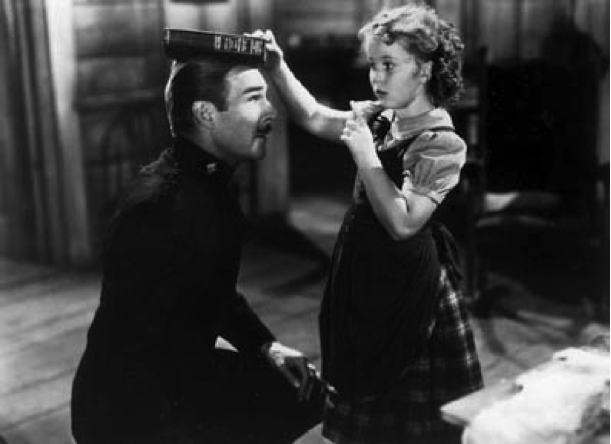 From 1935 to 1938, Hollywood’s number one box office draw was a little girl with curly hair, a winning smile and an Academy Award won at the tender age of 7. Legendary child actress Shirley Temple was a bonanza for Twentieth Century Fox with audiences finding her roles as a charmingly direct and honest child helping eccentric adults with their troubles endlessly endearing. Having had previous screen adventures in India, China, and the Swiss Alps, it was only a matter of time before Shirley found herself north of the border in the 1939 western, Susannah of the Mounties.

Set during the building of the Canadian Pacific Railroad in the early 1880s, the film begins with a Mounted Police patrol led by Inspector “Monty” Montague (Randolph Scott) happening upon the remains of a wagon train. The only survivor of the massacre is a young girl, Susannah Sheldon (Temple). Horribly shaken, she tells them that her family and the settlers were killed by members of the local Blackfoot tribe. Monty does his best to comfort and instill courage into the frightened girl as he and his men take her back to their detachment.

Monty’s superior Superintendent Standing (Moroni Olsen) calls a PowWow with Blackfoot Chief Big Eagle (Maurice Moscovitch) who denies any knowledge of such attacks nor of the recent horse thefts suffered by CPR builder Harlan Chambers (Lester Matthews). Their is evidence of Blackfoot involvement however, so Big Eagle promises to weed out the rogue elements in his tribe offering to leave his son Little Chief (Martin Good Rider) as a gesture of goodwill.

As Sue begins to form an awkward friendship with the boy (complete with a “peace treaty” sealed by a nauseating peace pipe), matters at the detachment are complicated when Standing’s daughter Vicky (Margaret Lockwood) comes to visit from Toronto capturing the attention of both Chambers and Monty. The resulting rivalry puts Chambers on edge which results in a skirmish at the railway camp when he discovers that horses sold to him by Blackfoot member Wolf Pelt (Victor Jory) were in fact the same stolen from him earlier. He callously utters a declaration of war which triggers a raid by the Blackfeet on the detachment and the capture of Monty. With Monty facing potential execution at the hands of the tribe, only the efforts of Sue and Little Chief, who have both discovered the truth of Wolf Pelt’s treachery can save him and restore peace between the Blackfeet and the Mounted Police.

The picture is pretty standard B-movie fare for the time. A relatively straightforward story punctuated by bits of cute and comedic business between Temple and her co-stars. This is only my second Shirley Temple film (the other being The Bachelor and the Bobby-Soxer from later in her career), but it’s not hard to see why audiences from then and subsequent generations have found her so appealing. She is the highlight of every scene she’s in and manages to play the full spectrum of emotions without every coming off as bratty and annoying. Some may find her character’s maternal side a little dated, but understandable given the movie’s late-Victorian setting. Her arc from scared little girl to facing down the Blackfoot Chief at the film’s climax is certainly satisfying and ties the whole thing together nicely.

I would be remiss if I didn’t take the film to task for it’s wildly inaccurate and stereotypical depiction of the Blackfoot people. Hollywood screenwriters certainly liked the name Blackfoot, but didn’t care much for the people who bore it as they are depicted as tribes at constant edge of conflict with the Northwest Mounted Police, attacking wagon trains and burning prisoners of war at the stake. None of that was true however as they were among the most peaceful of the Plains First Nations at the time. They signed one of the earliest western treaties with the Canadian government and their great Chief Crowfoot was known to ride the CPR many times with a free lifetime pass given to him as part of a land settlement. The film may only paint a couple of the Blackfeet of the film as bad apples, but the rather savage actions of the tribe in the film remain concerning. Don’t treat this as a history lesson.

The Mounted Police themselves fare a little better as the production had the retained the services of ex-Mountie corporal Bruce Carruthers as technical advisor. He convinced the wardrobe department to dress the film’s Mounties in the period-accurate uniform of pillbox hat as opposed to the usual Stetson. He also got the screenwriters to change Little Chief’s role from hostage to guest as the Mounties never stooped to kidnapping. He was less successful in toning down the film’s treatment of the Blackfoot however as the film needed a heavy.

In all honesty, you could have likely swapped the Northwest Mounted Police with the United States Calvary and had essentially the same movie. Most Hollywood films about the Canadian frontier had standard American Western tropes thrust upon them and this movie is no exception. It would be a shame to let the film’s historical inaccuracies put you off the whole thing entirely however. I find the film most enjoyable as a pulp adventure and I expect you will too.