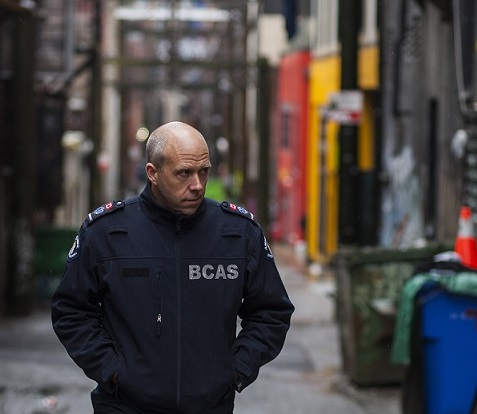 Most of us move around the world pretty casually without thinking about, what if… What if, all of a sudden I was hit by a car or bus or guitar? If my plane went down in a small rural town, or my truck lost its brakes and l ploughed through a gate and landed in a lake, what if… What if I got shot by an insane robot, got a pencil in my eye from an elevator guy or was bit in the neck from a bank teller cashing my cheque, what if…  It’s something we just don’t stop and ask anymore. Would it matter if we were always prepared for something to go wrong? Try as we might, we can never plan for every moment of trauma. We don’t live in a perfect world and we all make mistakes. Sometimes those mistakes have tragic consequences that require first responders. Amongst those first responders are firefighters, police and paramedics.

Out of the first responders that arrive to aide in your bear trap incident, it’s the paramedic that will spend the most time tending to your injuries. They’re also amongst the highest working population affected by PTSD. Kevin Eastwood directed and produced the documentary, After The Sirens for CBC. It tackles the PTSD condition amongst paramedics in search of the common thread.  I spoke with Kevin about the documentary and what he found out.

“You’ve produced and directed film and documentaries. Where did it all begin?”

“My parents were artists as well as my grandfather. I’ve grown up around it and was the third generation to go to art school where I studied film at Emily Carr. In high school I was in Theatre and Visual Arts. Directing and Producing seemed like the natural reconciliation of the two fields.”

Since school, Kevin has been involved in the industry for the past 18 years. He started with a company called Anagram Pictures. He made 4 films with them within the span of a decade. He expanded his resume when he began making documentaries. He produced one on Paul Watson, the legendary conservation and environmental activist. At that time Paul had his own series, Whale Wars.

Kevin went onto filming Life and Death in the VGH Emergency Room to doing season 1 at The Romeo Section, the Chris Haddock CBC series. He went back and forth for awhile and also made a movie, Preggoland starring Sonja Bennett, James Caan and Danny Trejo. He’s also co-produced the film, Fido starring Carrie-Anne Moss (Matrix) and Billy Connolly.  Before that he made the box office hit, The Delicate Art of Parking. He’s has one foot in each camp.

“What inspired you to make this documentary?”

“My motivation came from having exposure to paramedics when I was making the series, Emergency Room Life and Death in the VGH.  I’d done a ride-along and spent time getting to know the paramedics but I’d never explored the dark side of the job. A few years ago I began hearing stories about the rates of PTSD amongst first responders such as police, fireman and paramedics. Once I started delving into the subject, the more I realized how much more paramedics are impacted more than the other professions. I also learned that one of the paramedics I’d become familiar with had been diagnosed with PTSD. It prompted me to make the documentary.”

“How did you find the 3 subjects in the documentary?”

“I had reached out to two support groups for first responders. One is, You’re Not Alone PTSD BC and another is a support group in Ontario. Through the two groups I met my 3 subjects. There were many more paramedics struggling with PTSD but focusing on the 3 made the time more effective in telling their stories.”

Most paramedics work 4 days on and 4 days off with 12 hour shifts. Every shift, they may be going to a dozen routine calls but within the sheer volume of them they’ll see more trauma than most do experiencing combat.  It almost seems inevitable that there’s a growing number developing PTSD. There are certain big events that are more likely to cause PTSD for paramedics. One of those would be a call involving someone they know really well. Having to treat someone you know or pronounce them dead is one of the hardest things to do. As a paramedic they are spending the most time with the patients. They’re treating them and are intimately involved with going to the hospital with them. As a result, they’re more likely to take on their pain and suffering. It’s a very different experience from police officers and firefighters.

“Can you tell me about the events that led to the three subjects being affected with PTSD.”

“One of the paramedics name is Clive.  His condition became part of his life ever since he came across an accident where he had to pronounce a childhood friend of his, dead. He was closer to his friend than his own brother. It was the traumatic event that led to his PTSD. He wasn’t immediately affected so he hadn’t taken any extended time off following the incident. He began recognizing his symptoms after he began behaving differently, acting differently and withdrawing. The event altered him and it took a long time to address it.

Another subject was a paramedic in Barrie, Ontario. Natalie was responding to a double murder in a hotel room and once she arrived, she immediately started providing treatment to a wounded man. As she did he began to tell her that he was the one that had murdered the two women in the room. Her traumatic moment happened when she realized her patient was the murderer. She talks about the moral injury of that. A type of PTSD that occurs when a person deals with a situation or circumstance that violates their sense of right and wrong and their sense of what is morally right in the world. Having to treat a patient that you know is responsible for others brutal murders is definitely in that category. In addition, she had to go through a trial and testify against her patient.  It was the start of her disassociation and everything else was more exacerbated.

The third subject in the documentary is a paramedic named Don. He’s been a first responder for over 30 years but it wasn’t until he responded to a mass shooting in Vernon, BC in ’96 that he became profoundly affected.  Nine victims had been fatally shot. Like many others, he didn’t receive treatment until much later. There were six paramedics as well as police that responded to the shooting, Don and his partner along with a dispatcher were all diagnosed with PTSD. I don’t know the status of the other first responders.”

Kevin adds that it’s not just one traumatic event but an accumulation of years on the job that can bring it on the condition. The job of the paramedic has only existed since the ‘70’s and traumatic events that bring on PTSD can happen anywhere. You don’t have to live in the big city.

“Is there still a stigma surrounding PTSD that keeps others from reporting it?”

“There’s still very much a stigma attached to the condition. Many coworkers and other paramedics will question the validity of the person claiming PTSD. They will dismiss the symptoms for other reasons. When somebody tries to make a PTSD claim with Work Safe BC or other insurance agencies, the claims investigator will look at other reasons causing the symptoms besides work related. The investigator is very reluctant to believe the diagnoses and can be quite invasive in their investigation. Many claims are rejected. It’s a real deterrent for others with the symptoms to register their claim.”

“When did you meet the three paramedics in the story?”

“I met the two BC subjects last summer and Natalie in October. I began filming them shortly after in the summer and the bulk of it from Nov – February.”

Kevin Eastwood has also talked to a dispatcher that had been at the job for many years. They’ve been living and continuing to work with PTSD because they caught it to late and now live with the permanent condition.

“How did you finance the documentary?”

Kevin and his small film crew travelled to Barrie, Ontario, Scotch Creek, Vernon and Vancouver for the footage and to speak with the subjects. He tried reaching out to government officials and Insurance companies for comment but nobody was willing to respond.

After The Sirens can be found online as of April 6 and it premiered on CBC DOCS POV on April 8th.