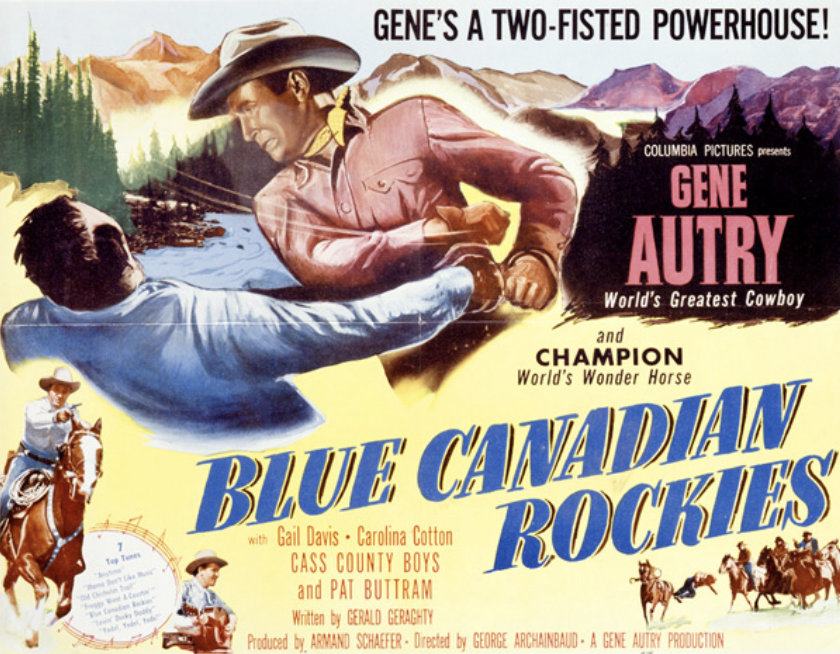 Like any decent film fan, I’ve made a point of catching some of the finest fare the Western genre has to offer. From John Ford’s sojourns to Monument Valley to Clint Eastwood’s Spaghetti screen-feasts, I’ve gobbled up just about any duster west of the Mississip’ that makes the Top 10-100 lists. There is a huge gap of my genre viewing however. Up until recently, I don’t believe I’d ever laid eyes on a single B-western that populated silver screens in the first half of the twentieth century before moving to the tube in the second. No Roy Rogers, Hopalong Cassidy, any pre-Stagecoach John Wayne, nothing.

Thanks to Pierre Berton’s Hollywood’s Canada tome, I’ve been aware that at least a few oaters were known to move the action across the 49th (does that make them “Northerns”?). Legendary singing-cowboy Gene Autry dutifully followed this trend and his 1952 effort Blue Canadian Rockies seemed a good a place as any to start.

Playing whatever version of himself the script requires as always, Rockies finds Gene serving as foreman of the vast border-straddling Higbee Ranch with his faithful horse Champion and hinderance-or-help partner Rawhide (pubescent-voiced character thesp Pat Buttram). Within five minutes, he is sent on a mission by old man Higbee (Don Beddoe) to break up the union of his daughter Sandra (Gail Davis) to city-slicker Todd (Ross Ford) who has convinced her to turn her half of the land into a deluxe dude ranch.

Arriving in Alberta under the convenient ruse of hired singers, Gene and Rawhide soon find themselves embroiled in a bitter power struggle between Sandy and timber magnate Ed Mitchell (Mauritz Hugo) whose men are sore about being denied logging rights since the ranch’s opening. Before long, trees are falling and bodies are beginning to pile up. With no guns (ranch rules) and apparently only one Mountie in the entire Lake Louise area for backup, Gene and Rawhide will have to level up between musical numbers (Country singers Carolina Cotton and Cass County Boys guest star as themselves) to solve this dispute before their hour is up.

Autry was never much of an actor, but enough of a personality to carry his brand of singin’ cowpoking for 30 years. While Autry’s name may be above the title, sidekick Buttram manages to steal the show every time he’s on screen with his winning combo of charm and hijinx (you may remember his offscreen appearances on Disney flicks Robin Hood and The Rescuers). There’s no real weak link in the work-horse cast, but no one else particularly memorable either.

Like many of its long-lost breed, this Golden-Age B-pic substitutes California for its Canadian setting with the only genuine glimpse of Alberta furnished by a grainy stock shot of moose (none were harmed. Rawhide isn’t a very good shot). The rest of the picture is content to furnish just enough plot and archetypes to facilitate its brand of two-barrelled and two-fisted action punctuated with plenty of Country singles to land on the Billboard charts.

Blue Mountain Rockies wasn’t made for the critics and with the massive fanbases of young and old that Autry and his contemporaries generated, pictures like this didn’t have to. They may not have been making art, but were doing their darndest to put on a decent show and they certainly succeed in that spirit.