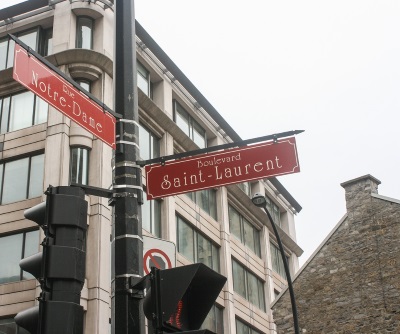 There isn’t many films like the one I just saw, a feature-length about three immigrant women who have just arrived in Montreal. Each of them has their own segment in the movie.

The first story (in black and white) is about a Chinese immigrant named May Li (Bonnie Mak). Concerned about her mother’s health, May Li invites her mother to live with her in Montreal. Her mother of course is paranoid with the feeling that there are ghosts all around, which she refers to as foreign ghosts. Things don’t get much better when May Li’s boyfriend, Luke, comes by for dinner.

The second story follows a Greek-born woman named Ann Wilson (Vaggos Evyenia). Recently, she has gotten promoted to an executive in her consultant business and is living life independently. On a Halloween night, she goes out with her lady friend, Celine (Nancy Snytar,) to one of the weirdest late night clubs ever. Anyways, some Spanish dude dressed as the devil tries to flirt with her, but she rejects him and goes home to prepare for her work the next day. At first she is happy with the new job until she discovers her co-worker Pepe (Carlo Alacchi) is the same Spanish guy she met last night. Ann tries to explain to a friend her situation with this strange guy. Pepe is not the fastest or most reliable worker. One night toward Christmas the two somehow get together and learn interesting things about each other.

The third story is about a waitress from the Dominican Republic named Tanya (Camille Martinez) as she watches three men yap back and forth. The men gain a deep interest in her and want to know her better. Eventually, she gets closer with one of them, Jack Stone (Robert Van der Linden), who is a writer. After things don’t work out with Jack, Tanya goes out with the other two men and soon things get out of control between the three guys and Tanya.

Every story fits together in an interesting way. Also, all of them share the same restaurant, scary foreign mask and the same moral: life has a way of working out. Interestingly enough, the women cross each other’s paths from time to time. I really like how this shows the perspective of how female immigrants interact with people in Canada. I actually know a fair amount of them myself.