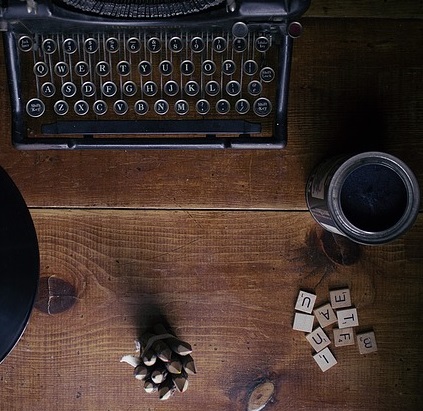 Okay, I’ll stop. This film is very much like most science fiction shorts, being narrated and having futuristic music.

Starring David Amito as Michael Downey, who has decided to write his first novel. Seeing as this film takes place years ago, Michael doesn’t have a computer. Instead, he writes his whole story on a typewriter. We’re then introduced to Michael’s style of writing as he types a story about alligator shoes on some kind of carpet. After knocking over a milk carton he was chugging from earlier, Michael gets up to grab a rag and looks carefully at the text he wrote: Milky white. Just like the milk he spilled.

Moving on, Michael writes his story about someone knocking at a wooden door, when suddenly someone knocks at his door. It’s  a stranger (Michael Coombs) who explains Michael’s strange feelings. Interestingly enough, this man resembles the protagonist in Michael’s story too. So Michael invites the man inside to try the typewriter and witness its power. The man instead gives Michael a small pamphlet about God. Apparently the man is a Jehovah’s Witness. The man types the letter f on Michael’s typewriter and leaves. Michael tries to take advantage of the typewriter’s power and make himself famous. In a few moments, it actually works but Michael will soon realize he must be careful with what he has typed.

The ending was very informative and well worked out. The whole story was interesting as well. The actors did really well, and this was quite enjoyable to watch while also teaching a lesson not to misuse of rare special opportunities.