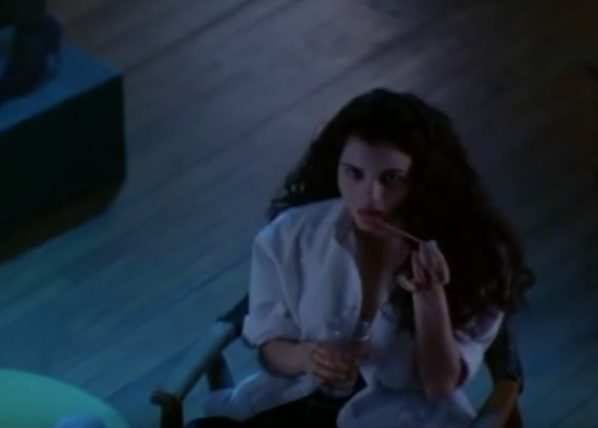 Atom Egoyan’s 1994 film Exotica opens with a slow, panning shot of a jungle-themed mural, mixed with instances of artificial plants in its foreground, which gave me an immediate sense of déjà vu. The camerawork here is undeniably similar to the opening of Egoyan’s subsequent 1994 feature, The Sweet Hereafter (a film I reviewed last year), in which loving family sleeping in each other’s warm embrace are slowly revealed. In the hands of a director like Egoyan, this is not only a recognisable technique used by the director, but also a nod to his film’s thematic heart.

While The Sweet Hereafter is more direct with its opening image of the nuclear family, I find that Exotica’s is more fittingly abstract. It ties in with Egoyan’s intrigue of strip club culture, whose fascination with the concept of men paying for titillating, but ultimately performed services is clear in the opening scenes of the film. The genius here, however, is in the way that Egoyan then takes this concept, and builds a complex, poignant story around it.

At the centre of this story is Exotica, a strip club frequented by tax auditor Francis Brown (Bruce Greenwood).  Francis continuously grieves for his murdered daughter, finding solace only in the private dances he receives from Christina (Mia Kirshner), who wears a schoolgirl uniform as she performs. This attracts the unwanted attention of Eric (Elias Koteas), the club’s DJ and Christina’s ex-boyfriend. Eric has impregnated the club’s owner Zoe (Arsinée Khanjian) in return for his own job security, giving him licence him to verbally berate Christina while on stage, as well as meddle with Francis and Christina’s relationship in the club.

In the film’s earlier segments, Egoyan embeds within the viewer a fascination for the world of exotic dance that is similar to his own. There were moments in these scenes where I felt like I was watching a documentary instead of a construction, as Egoyan’s camera scans the room without judgement, only insight.

There is even a human credence added to the strip club, as clever editing cuts between the ballet performances that one character, Thomas (Don McKellar), attends only to pick up men, while Francis regularly attends Exotica not for sexual gratification, but to cathartically deal with the loss of his daughter. In Egoyan’s unbiased eye, the club’s guests are still people with lives, stories, loved ones, and insecurities, and are no different in this sense from those who attend ballet performances.

So, with social observations aside, to call Exotica an emotionally heavy film would be a slight understatement. Egoyan puts us right in the middle of these individuals’ lives, who are not in the process of becoming damaged, but are very much already there. Though, instead of revealing their troubles chronologically, Egoyan’s immensely tight script fills in the blanks as the story unravels, while also delivering a great deal of subtextual dialogue, resulting in a most affective, hard-hitting film.