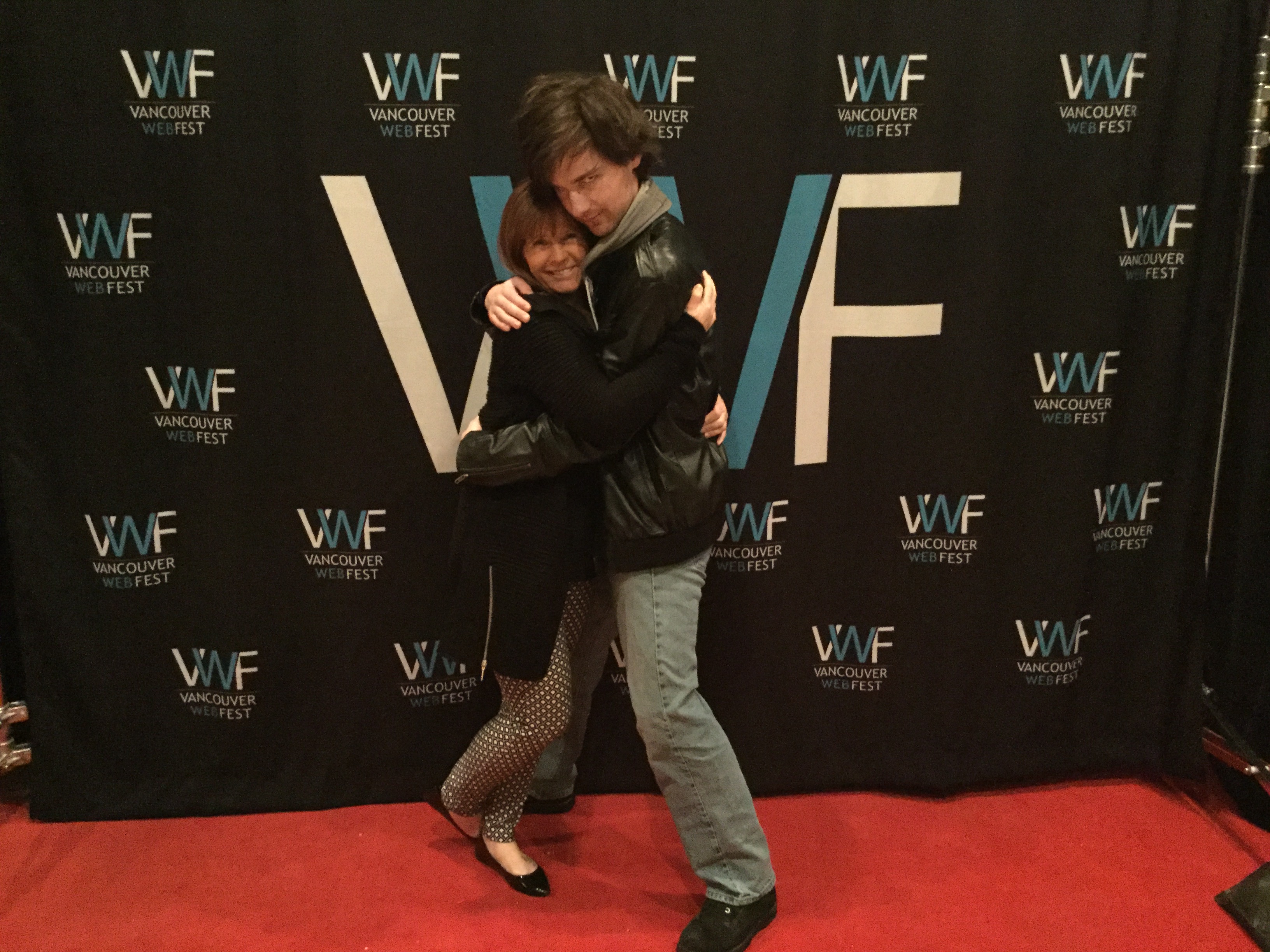 Every year now, I’ve covered VWF in a couple variations. This year, it was proven to be better because I got to do more than stand around in a hall. So, I present the highlights of this year’s Vancouver Web Fest. But before that, I have to give some shoutouts to Suzette Laqua for making this event a possibility every year (as well as being in the picture above), Shiva Kashi, Myles Liversidge, Stephanie Michelle Scott, the rest of the media team, Mike Cavers as well as all of the MCS, guests, panelists, sponsors, judges, workshop operators, volunteers, everyone who submitted, and that guy who bought me a beer. Now let’s get on to the cool stuff!

Virtual Reality – The next big thing that’s getting on the rise, everyone wants to live in a fantasy world but sometimes closing your eyes and making a vision isn’t enough. Anyone can dream it, but it’s much better to make it a reality. And that’s what VR is doing. Revolutionizing the way we see things in a super cool world. Friday’s 10 AM workshop provided some pretty cool historic information about the history of Virtual Reality as well as development of it today. There was even some virtual reality headsets to try out. I got to use one of them until I smacked someone in the face. I thought they were an object I could grab, the goggles made me do it, okay?

Alternate Reality Marketing Workshop with Dave Fracchia and Kevin Harwood – I’m not too big on gaming (scary, isn’t it?) but I’ve warmed up to it a little bit more for reasons. This could be one of them. An upcoming game called ‘The Station’ is coming out in a website made up of alternate reality, exploring the alien world. Inspired by NASA’s most recent discoveries of other planets with possible lifeforms, this game brings you into a galaxy of danger and adventure. Super cool stuff in my opinion. I think I’ll just go there for a vacation this summer.

Legal Issues in the Digital Age with Jeff Young – During this one, everyone learned some super important tips about legalization in Canada with web series. They also learned that Entertainment Media Attorney Jeff Young composed the soundtrack for The Simpsons Hit & Run. Dealing with Rights (whether controlled provincially or by law), intellectual matters, and liabilities is just a little bit of the taste of the legal world. Other tips included how a trademark is a protected brand and that fair dealing, not fair use, exists in Canada. Important info for anyone if I ever heard any.

Vancouver Economic Commission 2017 Industry Speed Dating – Man is THAT a mouthful. Vancouver Economic Commission came up with a fun way for people to connect as well as train to pitch their exciting projects to other individuals. With only 3 minutes each. That one was more noisy and hectic than Canada Way at rush hour. I also have to wonder if the super long name was part of the pitch when VEC presented it to VWF. I’m probably better off not knowing all the details.

Screening Block 2 – What is VWF without screening some episodes of web series? This one featured impressive work from different series around the globe. Personal favourites of mine would include The Wizards of Aus, Ghost Cam, Mom and Me (and everyone online), and Life Sucks! But at least I’ve got elbows. Plenty more exciting content from other screening blocks.

Screening Block 3 – Everything about this one was amazing, but I especially enjoyed the humour involved with Craigslist Therapist. I was practically dancing in my chair to the musical talent in The League of S.T.E.A.M and Divine Shadow was so sinister and exciting.

Screening Block 5 – I know I’m not mentioning every single screening block but trust me, they’re all really good. My favourites in this one included Discocalypse, Fools for Hire, The Adventures of Broken Heart, and Conversations from the Afterlife. They were all very creative.

Screening Block 6 – Like the last one, this one was MC’ed by the talented Mackenzie Gray, everyone’s favourite local actor in Vancouver. Like every other screening, it’s a mix of genres. The intensity of Petrol and Madame Hollywood really reeled things up and got me into the mood for some thrills and spills. Then I also enjoyed some humour from other series like This is That, and The Room Actors: Where are they now?

Game Show “What the Hell Do YOU Know?” – Apparently a lot. Hosted by the humorous and fun-to-be-around Mike Cavers (Fools for Hire) as Dink Martindale, this amazing new addition to the VWF got guests of the fest invited to step right up and test their knowledge of Vancouver, VWF, and Canadian culture. The entire hall got separated into two sections of teams: The Left Side Leaders and The Right Side Rulers. My team won by a landslide. Mainly because I’m knowledgable and watched every single screening so I knew what something was when it came up on the screen. My team in particular was The Right Side Rulers. Funny thing is I’m also right-handed. This show practically riled everyone up for karaoke, including yours truly as well as the fact that I at least won a free movie ticket. (I’m pretty sure there’s videos of me at my most enthusiastic, I was on several live streams that night.)

Screening Block 7 – Not so much on comedy but there were still some funny web series such as Stay at Home Mom, Fluffy Marky, and Meet the Ladybugs. Tone down to a serious mood with Invancity, Untourage, and Seasonal Life. Hosted by the friendly Winson Won who I met while he was organizing the table of free stuff.

CBC Comedy : Infused with Maple syrup – Hosted by Eric Y. Lapointe and featuring Chris Harris, Zach Feldberg, Matthew Clarke, and David Milchard. These gentlemen explained what is truly humorous in Canadian culture. At the same time, some of their own content had been showcased.

Creating Relevant Content on Youtube – To start off, Joel Wegner explained how his very own Youtube platform Juniper was able to help content creators get more revenue than those people who play games. Following afterwards was Matthew Clarke as he talked to content creators Lisa Schwartz, Jennifer Chiu, Matt Dennison, Jason Lucas, and Bradley Friesen. Each and every one of them screened some of their work as well as explained what they put in their content to make it more appealing to viewers and subscribers.

Awards Ceremony & Gala – Of course, the best is always saved for last. With the doors opening up to a full packed hall and hosted by Mike Cavers as himself, the awards ceremony gave out awards for the many different submissions. Not many of them managed to make it out that night. However, things still heated up and went well as the premiere of “Explaining to an Alien” was aired and even more special, the filming of the first episode Brokeback Mounties, a Canadian comedy web series (footage may be released once I get full permission to do so).

Vancouver Web Fest seems to get better and much more fun every year. Though I’m slightly upset there weren’t any hawks, gift bags (you got to make your own this year) or bad puns by hosts. Though one slightly funny moment was when Brett Patrick Jenkins had to rework his powerpoint presentation a bit during his speech about the future of Digital Television. Also, props to that guy for using slides with emojis. Impressive content and things to do all around, I’m already positive that next year will be even better. This happens all the time.