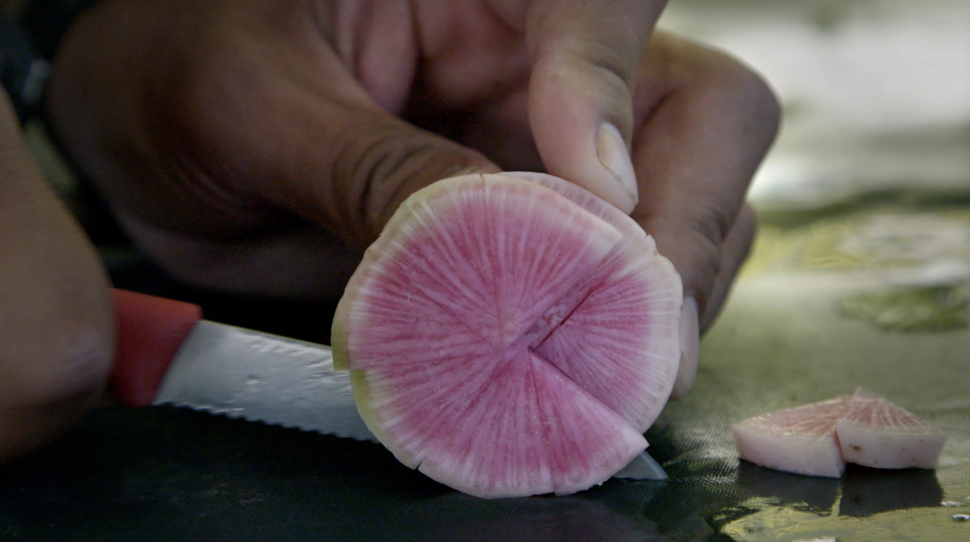 “The most radical thing you can do is to grow your own food”, is a paraphrased sentiment expressed throughout the new doc, Food for the Rest of Us. Director Caroline Cox expands on issues brought up in her previous short doc Wild Kitchen to feature length here with satisfying results, if not always conclusive ones.

We are first introduced to a collective farm in rural Hawaii whose wholistic farm-to-table programming is is conducted in the shadow of a neighbouring military base which takes up the majority of the arable land. In Kansas City (the one actually in Kansas), activist Eric Person runs a community garden on the grounds of a high school and collaborates with a maternal health clinic to to bring fresh produce to a nutrition-deprived food desert (he prefers the term “food apartheid” since this problem is a man-made one). On a snowy Colorado farm, Kosher butcher Tzuria Malpica has found a place in a long male-dominated field and endeavours to bring more women, people of colour and the LGBTQ community into the realm of ethical meat slaughter. The final stop on this culinary trek takes us to the far north shores of Tuktoyaktuk, NWT where local entrepreneurs attempt to grow greenhouse vegetables in a challenging climate as traditional Inuit hunters try to adjust to a changing one.

There’s plenty of food for thought here (any bad pun complaints may be forwarded to my editor) and Cox does an excellent job of elevating the many subject’s stories and experiences. There’s a real yearning amongst the participants to be less reliant on modern food systems that often disconnect us from what ends up on our plate, often in unhealthy ways. They also see growing their own food as a way to cope and fight back against historical oppression and injustice. After all, everyone needs to eat right?

If you have any background knowledge of growing world population and food security, you may wonder how the solutions presented here are scaleable. Truth is, they probably aren’t. There’s a running disdain from the film’s participants for anything reeking of genetic modification or capitalism. The notion that we can all become farmers and/or hunters is patently unrealistic. There simply isn’t enough land and humanity at large has moved on from the agrarian societies promoted here. I don’t so much to take issue with the sincerity or the motivations of the film, merely on observation of its conclusions or lack thereof.

We live in a time where being mindful of what you eat and where it comes from. A growing world population, nutritional issues and a shifting climate make all our dinner plates more political in nature, whether we realize it or not. Food for the Rest of Us may not have scalable answers, but has a lot to say about where our food traditions came from and how they may at least contribute to a healthier and more sustainable future. That’s certainly a dish worth consuming.