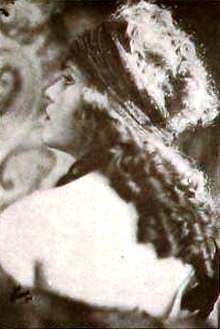 Donald Bradley Jr. (Lyman Williams) has recently been promoted by his father (George Irving) from executive assistant to president, putting him in charge of all the company steamships. Don Jr. is in a relationship with Joan Bradley, his fiancée (Diane Sinclair) but the new promotion doesn’t give him much time for her anymore. As Donald goes on a business trip with his associate Nat (Harry Myers) all they really do is sit at a restaurant table and not discuss work (one of the advantages of being a higher rank). A girl named Elise (Charlotte Merriam, pictured) joins them  and Don gets along a little TOO well with her. They  have some fun dancing, and end up going back to her place. This starts an affair and things can only go wrong from here.

Don realizes what he’s doing is bad and returns to Joan so they can get married, but after a phone call from Elise who is feeling lonely, Don finds himself heading back to her. It just so happens that Elise has  transmitted some disease to Don, which he’s passed on to his wife. A couple days later, Dr. Bill Hall (Jason Robards) comes to the office and breaks the news to Don: It’s not any ordinary disease, but venereal disease (syphilis). All because of an affair.

Most fussy people would complain about how the picture and sound is low quality but this did come from the 1930s. Of course, there are other things to note too. While the acting was very humdrum, the pauses in between dialogue dragged too long, and the story advanced at a slow steady pace, infidelity and STDs are still issues today.