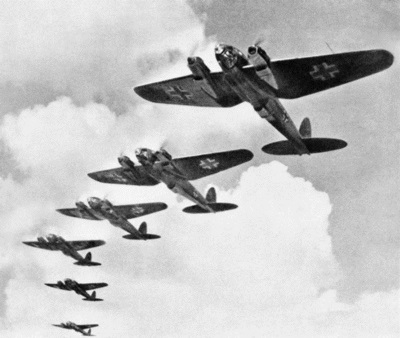 On National Canadian Film Day, I decided to dwell in history and check out a film from 1941, streaming free on the NFB site.  Churchill’s Island is a war themed documentary.

This film explains the entire Battle of Britain, showing the multiple forces around the island as well as the huge battle between the Royal Air Force and the Luftwaffe, while the Navy takes out out air and sea raiders. As the forces invade the island, the British take action. 75% of the footage shows preparation for  surviving the attack.

During this time, London would be reduced to smithereens. Germans would constantly warn the RAF that they would be destroyed. Eventually the Germans got taken down due to the fact that messing with RAF was the biggest mistake they ever made.

German troops soon prepare to take on Britain and head out again, this time surrounding British shores in U-boats. As the U-boats wait to attack any oncoming enemies, ships from Britain come in, only to get taken down by torpedoes. The battle is reaching a climax as multiple ships are being sunk. Some new ships known as the Convoy help save Britain, and Germans realize all they can do is invade — so they work hard to plan it out. They prepare methods of parachuting and wielding weapons as they make their way towards the island. As the forces look out for Germans on the air and sea, the land is patrolled for possible invaders. Many of Britain’s men as well as Canadian troops come to join in this battle.

The film concludes stating that Churchill’s island stands unconquered and defies any invaders to come if they dare. This documentary was the first one to ever win an Oscar for the NFB, and also served as an educational insight into what went into preparing for defense against Nazis in WWII.

One thought on “Churchill’s Island: A Documentary Review”