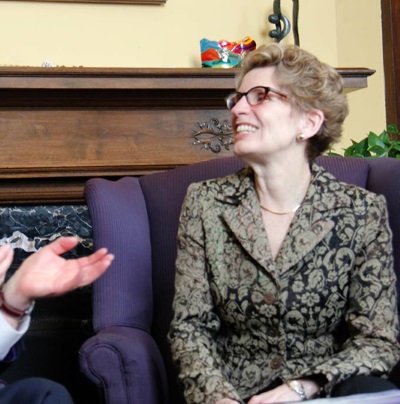 (Via CNW) Viewers will get to be a fly on the wall in the backrooms of Queen’s Park when Premier: The Unscripted Kathleen Wynne airs on TVO (and also streams online at tvo.org) June 6th at 9:00 PM. Director Roxana Spicer and her crew were granted exclusive access to the inner circle meetings of the Ontario government including cabinet, staff and stakeholder discussions in the lead-up to the Ontario 2015 budget, a press release states.

Premier: The Unscripted Kathleen Wynne was produced by Peter Raymont and Andrew Munger of White Pine Pictures, an independent film, television, and digital production company based in Toronto. The company says of this cinema verité-style documentary film, “With exclusive behind-the-scenes access, the film will follow Premier Kathleen Wynne and her senior team as they prepare for a pivotal moment in Ontario’s history. The film will give Ontarians a first-hand account of how decisions are made at the highest levels of government.”

The documentary is licensed by TVO, with financing from several other sources.

Alternate viewing of Premier: The Unscripted Kathleen Wynne is scheduled on Sunday, June 7 at 11 pm, and Wednesday, June 10 at 9 pm. Immediately following the broadcast, at 10 pm on June 6, TVO will air The Art of the Possible, Peter Raymont’s 1978 film on the Bill Davis government. It will also be available the next day on tvo.org.