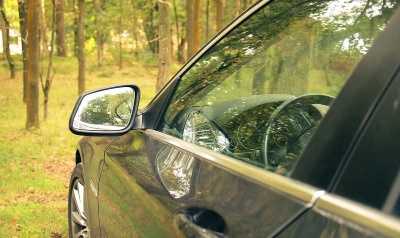 Everything can be mundane until something changes it forever, making things more dramatic. It can be anything, or even as little as nothing that causes your life to mess up. That’s the subject in the movie I watched, Ce N’est Rien.

Michel (Martin Dubreuil) is a monotonous man who lives with his younger daughter, Marie (Eloise Bisson). After she has been to the doctor and the results aren’t good, Michel realizes he has to do all he can to help her with this unexplained disease. As they drive home, Michel throws a fit. After dropping her off somewhere safe to stay, Michel has a smoke and continues to mope about the issue.

When another car pulls over, he recognizes the driver, his mother (Danielle Fichaud). Michel approaches her and demands to know where someone is, by someone, I mean his father. The rest of the movie consists of Michel driving some more, until he finally makes a stop outside a bar near the forest and steals a gun. Presumably his father’s, as Michel’s father is mentioned to be a hunter.After some more filler shots of driving in the woods, Michel begins contemplating the possibility of some final father and son time.

What goes on, I’m honestly not quite sure. There isn’t an awful lot explained, I don’t know what the film is entirely supposed to be about. I guess Michel’s father is responsible for Marie’s unknown wasting disease, but not everything was explained in a way I understood. The late night driving shots were lit in a pretty cool manner and the actors did well with showing emotion.

I honestly felt there should’ve been more screen time with Michel and Marie going through this tough time. There wasn’t much of a movie at all. But the film title did translate to “It’s just nothing” so I guess that’s what the film is supposed to be, nothing. Either the writing needed work or I don’t understand Quebec dramas any better than comedies. Yeah, guess who came up with this one?