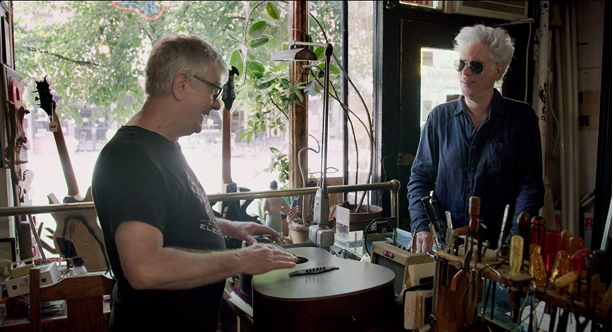 The documentary form has oft been utilized to allow prospective audiences a peek into people and places they might never otherwise experience. These subjects need not be large or even come with notoriety attached. Case in point the inconspicuous Greenwich Village haunt, Carmine Street Guitars whose daily dealings are chronicled in Ron Mann’s film of the same name.

After priming us with a visually tasty opening credit sequence of a guitar being decorated with pyrography (wood burning) technique, we launch into Monday morning at the eponymous establishment where Rick Kelly is opening up for business. Assisted by his 93 year old mother in the office (“at my age, it’s good to be anywhere” she remarks) and his young apprentice Cindy Hulej in the workshop.

Rick hand-crafts guitars almost exclusively using reclaimed wood from historic New York City buildings. “It’s like playing a piece of New York” one of Rick’s many celebrity customers notes. Such cameos include the likes of Nels Cline, Kirk Douglas (of The Roots, not Spartacus) and arthouse-fav filmmaker Jim Jarmusch. Through their visits to the store, we learn about the love, care and passion that goes into the manufacture of each guitar and Rick’s hopes that the art will carry on through the likes of Cindy; assuming that the shop survives encroaching gentrification in the neighbourhood that is.

There’s plenty of compelling stories, songs and images to be had in this doc. It’s a real shame however that it chooses to tell them through a poorly-rendered faux reality show format. Completely eschewing any contextual narration, on-screen interviews or even a direct cinema approach, Carmine Street Guitars instead chooses to tell it’s story almost exclusively through awkwardly-staged encounters between Rick, Cindy and their customers. A celebrity customer will enter, greet Rick and several minutes of guitar-talk will ensue. This might have worked if allowed to happen organically, but one can’t escape the sense that almost every move has been orchestrated for the filmmakers benefit which ends up being to the film’s detriment. Theres a reason why staged scenarios almost never work with non-actors. Any sense of spontaneity or familiarity is lost and the ability for us to be lost in the content suffers. This approach is especially baffling in one scene where a realtor selling the building next door stops by to introduce himself and Rick politely rebuffs him. Is this guy an actual realtor? Is he an actor? Damned if I know.

The film is at it’s best when it doesn’t force it’s subjects into a dog and pony show and lets moments like Rick’s mother cleaning or Rick himself picking up reclaimed wood unfold. It’s certainly a handsome production, well shot with plenty of insight into a lesser known aspect of the music scene. I couldn’t help but crave a little more context on the history of the store and it’s relationship to the Greenwich neighbourhood which a more direct documentary approach may have provided.

I can’t help but sense that the filmmakers were attempting to make a fictional feature disguised as a documentary (what would the Rogers Documentary Fund think??!). I might accept this approach from a reality show where I expect a healthy dose of bullshit, but I find it annoying at best and reprehensible at worst coming from a supposedly serious documentary.