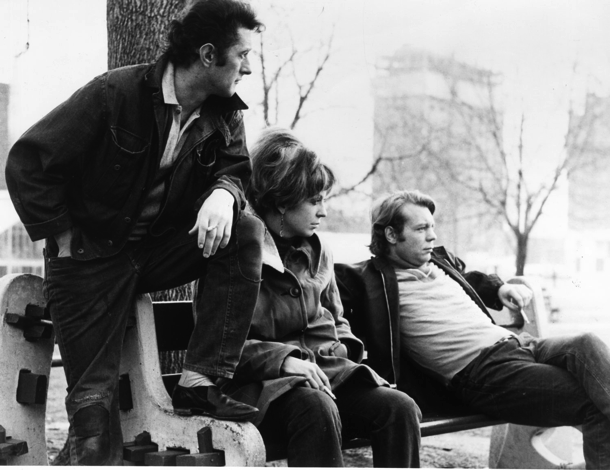 I was relatively unfamiliar with Canadian cinema titles growing up. While there was plenty of Cancon on television due to CRTC rules, the big screen and our family VHS collection remained bare of any production from north of the 49th. One exception was an old used VHS from Rogers Video with a black and white cover which my father seemed quite fond of. It wouldn’t be until well into my adult years that I finally discovered the classic that was Don Shebib’s Goin’ Down the Road.

Opening with majestic aerial photography of Nova Scotia, the film introduces us to the near-third world conditions of Cape Breton, illustrated further by the bittersweet melody of Bruce Cockburn’s title track. Best buddies Pete (Doug McGrath) and Joey (Paul Bradley) have packed their 1960 Chevy Impala and hit the road, bound for the supposedly greener pastures of Toronto. As visions of better jobs, gorgeous girls and good times dance in their heads, they figure their only problem will be “not knowing where to begin”.

Their start in Toronto is met with a rude awakening however when their expected jobs and lodgings fail to materialize. Bunking with the hobos at the Salvation Army, they soon realize that their lack of formal education and experience beyond low-skilled labour has locked them out of the local economy. They manage to gain employment at a bottling plant, making just enough for some good times on Yonge Street. Several months and many beers later, Joey finds himself married to Betty (Jayne Eastwood) who is also pregnant with his child.

The three move in together just as Pete and Joey are laid off from the plant. Pete is able to find work at a bowling alley, but Joey, growing ever more dejected and alcoholic, remains chronically unemployed. With money and food running out, the two men must decide whether to take drastic action to make their stand in Toronto, or continue on down the road.

Many stories, both real and fictional have depicted young folk chasing the horizon in pursuit of dreams of a better life. These stories usually end in triumph or at least some sort of silver lining that gives the characters tangible hope for the future. Not so here. Pete and Joey have their dreams snuffed out almost as soon as they are made. It seems Toronto and the rest of the world have moved into a new age and are content to push guys like this further and further to the margins.

“I just wanna do something that matters. Something that shows for myself, says I was there” muses Pete during a lunch break. Just what that something is, he can’t articulate. Although presented as a buddy film, this is safely Pete’s movie. Superbly rendered by Doug McGrath, he consistently exhibits a restless spirit just yearning to break out from his roughneck, hoser exterior. Even when Joey seems ready to quit, Pete refuses to throw in the towel, no matter the cost. He’s an engaging character that viewers can easily identify and empathize with. Paul Bradley also carries himself well as the aimless Joey and Jayne Eastwood damn near breaks your heart as Betty whose sudden marriage and pregnancy reduce her to a shadow of her former bubbly self.

Don Shebib captures this tale up-close and personal in free-wheeling documentary fashion. Ostensibly shot on three different 16mm film stocks, the movie has a rough homemade feel that fortunately aids the story rather than hinders it. The Toronto of 1969 is well captured for posterity from the neon-soaked excess of Yonge street to the sun-drenched shores of Lake Ontario and finally the bitter-cold of a Loblaw’s parking lot.

Much credit is due to Bruce Cockburn whose beautiful tracks Goin’ Down The Road andAnother Victim of the Rainbowdeftly illustrate the characters and their place in the world. They almost act as a Greek chorus to this Canadian tragedy.

The film moves at a steady clip, ultimately running 86 min. I can’t help but feel some of this runtime could have been afforded to smooth over some plot points like Pete’s Aunt and Uncle failing to board them or fleshing out Joey and Betty’s relationship. One less nightlife montage certainly wouldn’t have hurt the film any.

Goin’ Down The Roadis a landmark in Canadian Cinema and for good reason. Much like our neighbours to the south, this country was built on folks heading west, seeking a better future for themselves and their families. With success stories usually getting most of the press, it’s sobering to have a reminder that not everyone makes it.

NEXT WEEK: Down the Road Again