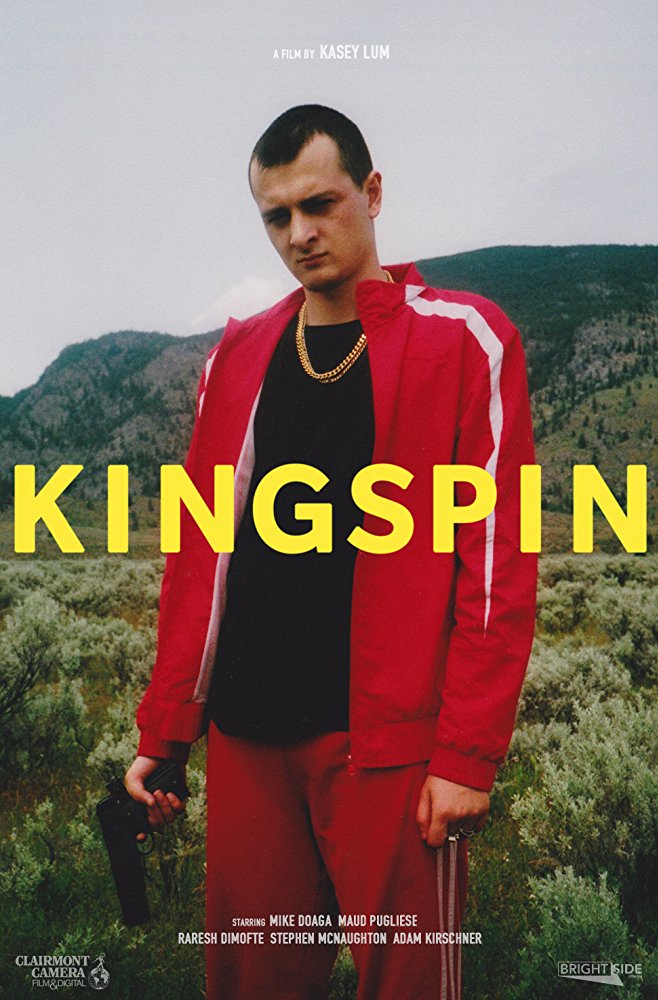 There are some films that will always draw a crowd. Usually it’s a great mystery or a true story based on an improbable event. Sometimes it’s based on a best seller or a comic book.  There is however one type of film that implores many curiosities, and that is a good gangster movie. There is something very fascinating about the underground world that will always capture our attention. I’ll never forget the first time I watched Scarface. I honestly felt like I needed a hot shower afterwards. It was so brutally angry and dirty. A wild ride of emotions that went from 0 to 60 in the blink of an eye. Gangster movies don’t come along very often, so when they do I take notice. It is a safe way of acquiring an adrenaline rush without taking any risk.

Kasey Lum has made his first film and he went completely gangster, Romanian gangster to be more specific.  Kingspin revolves around a young wannabe gangster and a French speaking young woman that finds herself in the wrong place at the wrong time.

“What inspired you to make a multi-language gangster film?”

Kasey works as a commercial director throughout the year. He’s also made music videos but this is the first film he’s written.

“Was it difficult to find a French and Romanian speaking cast?”

“I actually got pretty lucky. I had put out an open casting call for Romanian speaking actors. It only took me 10 days to find the cast. I had gone to school with a guy that spoke Romanian and decided to call him up. He had agreed to play the lead.”

“The images look great. What did you shoot it on?”

“I shot it on 35mm and my DOP Jan Klompje had a small supply of film left over from previous shoots. We used it sparingly and rehearsed to limit our takes. I’ve always wanted to shoot on film and I had written a letter of proposal to Keslow, a premiere camera rental house in Vancouver. They accepted my proposal and sponsored us with a 35 mm camera and gear.” When Kasey found his DOP Jan Klompje, he brought some of his own people along from previous productions. Another key player on the crew was his soundman, Sam Beatch. Kasey says he showed up with a lot of equipment and was an incredible addition to the crew. He would record and mix sound on location. There were some interior car scenes with the actors where Sam had to utilize Lava mic’s as well as a mic under the steering wheel. Having watched the film, the sound really was flawless.

“Where did you send the film for processing?”

“The film was processed in Montreal at MELS.  From there it came back to Vancouver to be scanned by Norm Lee at Film House Scanning.  The process turns it into a digital format allowing for easier editing.”

“You wrote and directed it. Did you also produce it?”

“I co-produced but the main producer was Matt Prior. He was amazing and really had an incredible skill for keeping the production going. If we needed anything, he’d get on the phone and make it happen. It was the first time we’d worked together.”

Kasey began the film in June of 2017 and completed it in February of 2018.  He says it could have gotten finished sooner but it took longer for the film processing and scanning.

Carole Méthot was their talented make-up artist. She provided a convincing gash/bullet hole to the lead actors stomach amongst other things.

“What happens to the film from here?”

“It’s been submitted to a few Canadian film festivals as well as a Romanian and French film festival. I’m still awaiting a response from most of them. Unfortunately it can’t be submitted to any US film festivals due to the music licensing. In Canada you can use music that was created by the author, but only 50 years after their death. In the US, it’s a 70 year wait.”

Moving forward, Kasey would like to continue directing but also explore more writing. He confesses that directing is where his heart is. As far as his next film project, Kasey Lum has been flirting with the idea of a possible sequel to Kingspin or even multiple sequels. I think it would have great potential, as well as a providing a great opportunity to see more chemistry and interaction between the two leads. After all, gangster films are few and far between.