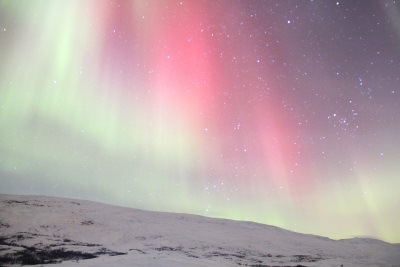 I have never seen anything like this. Almost didn’t think it was a comedy at first, but it slowly evolves when you least expect it.

The movie starts out with a poker game. Jonah (Jonas Chernick), a gambling addict, is trying to work things out with his associates as he has a huge debt that only keeps getting bigger. Jonah claims he can take care of the whole thing in a night. But another man’s hand says he loses. Jonah’s bookie demands money by the end of the night. Jonah, realizing he’s in trouble, leaves the building and decides to head home and scare up the money as easily as possible.

Meanwhile, his daughter Aurora (Joey King) is having her eyes examined and the doctor tells Jonah that she will go completely blind within a few weeks to a month. Aurora wants nothing to do with her unemployed lowlife of a father. But Jonah intends to turn that around by organizing a road trip to Churchill. There, they will be able to see the most amazing sight of all, the Northern Lights. Because when you can’t admit to your daughter she’s going blind, show her something cool before she loses her eyesight completely.

Aurora refuses stating “I think my name is punishment enough” and leaves. But spending the night with her friends doesn’t work as her near-sighted klutziness gets her humiliated. Jonah tries to ask for money from his girlfriend Kyla, but she refuses. Jonah is not the most honest and claims it’s for home repairs, though Kyla doesn’t believe him. Instead she suggests he spend more time with Aurora.

Since Jonah can’t pay off, the bookies break in after Kyla leaves and grab everything they consider valuable to pay off the debt. Jonah still doesn’t have enough for covering the debt and offers home renovations. The bookies refuse and settle for half the debt in 12 hours or someone gets hurt. When Aurora gets home, she realizes her dog, her records and her laptop are gone, so she goes berserk and storms out, not believing any of Jonah’s alibi. Jonah catches up with her and tells her once again about the Northern Lights. Of course, this is not only an attempt to bond, but also an opportunity to escape the bookie.  After setting some ground rules, they set out for the strangest adventure.

This was a humorous movie to watch, I enjoyed watching the two bond as they go on a road trip all while being chased by the mafia. The shots of Aurora’s blindness really made me feel like I could see her perspective, and the late night shots had an artistic flair to them. From meeting strange lowlifes to gambling with limited luck, the laughs keep coming in this interesting flick. It goes to show bonding and road trips can be fun no matter the hardships.