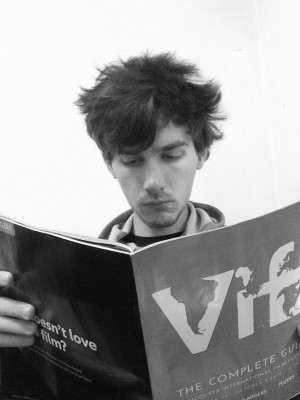 This happens a fair amount to some people who are heading to an event at VIFF. The main thing is always to go early to the screening as the line can always stretch quite a long way around the area. It happened to me at a time when they were out of special types of tickets for pass holders so they sent me downstairs to get into something called the rush line where I could get access instead. However, this just took slightly longer, but at least I got in. And there was a front row seat available. I didn’t get to check out too much today though due to schedule conflicts. Again.

Disorder – Taking place in France, a veteran of Afghanistan has been given the job of protecting a rich man’s wife and her son. A protection unit car is also parked outside the house for assistance and is watching for any potential suspects. The veteran, Vincent, is detecting all sorts of dangers day and night, but are they even real is the question. This had some moments of intensity and interesting outside shots. A bit unsettling at times, but I still enjoyed it.

One Million Dubliners – On the rocky to Dublin, 1-2-3-4-5. A documentary about Dublin’s greatest tourist attraction, Glasnevin Cemetery. Shane MacThomais gives details on burial procedures as well as stories about some Irish people who have gotten buried within the graveyard. It was certainly an educational film, but I think there should’ve been a few more people talking about the graveyard so it wasn’t just MacThomais and the occasional spot by a guest.