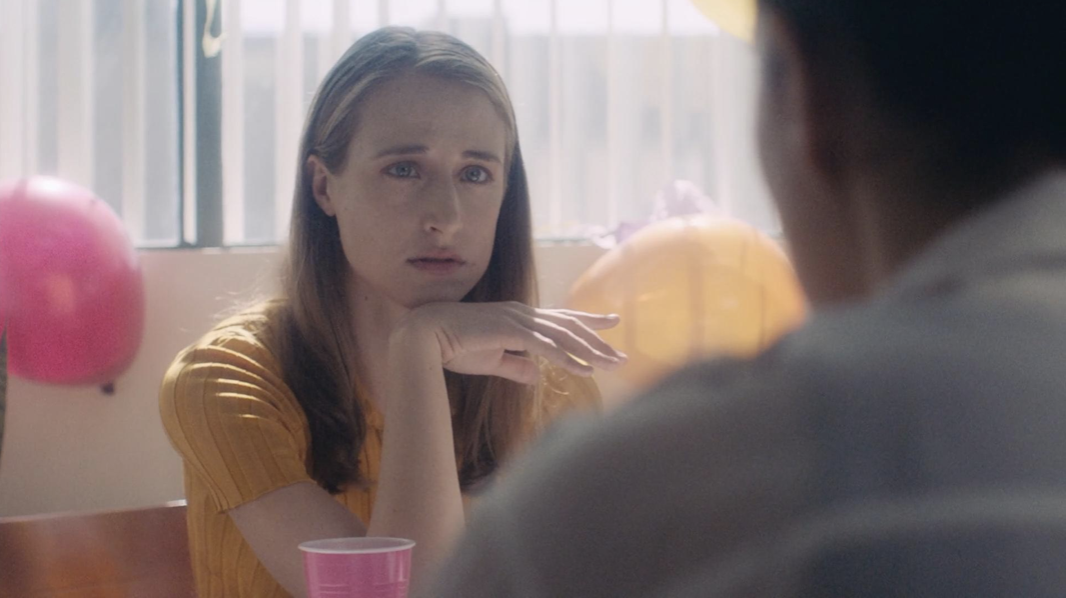 You’d be challenged to find a more egregious gap in our social services than the one facing foster kids “aging out” of care. Often dumped into adulthood without the life skills or ongoing familial support most of us enjoy to ease the transition, many fail to launch, often ending up in poverty or worse.

Veteran TV director Karen Knox doesn’t tackle the more grim mechanics of ex-foster kids in her debut feature Adult Adoption. The 25 year-old protagonist Rosy (Ellie Moon) has a steady bank job and a comfortable apartment. What she lacks is stable, long term relationships in her life, her foster parents long in the rearview mirror and her dating life essentially DOA.

When she accidentally confides to coworker Helen (Leah Doaz) about her foster upbringing, she’s directed to a website advertising “adult adoption”, where older adults can have a relationship with younger ones, mimicking the parent-child dynamic.

Such a relationship isn’t so easy to generate artificially however as Rosy finds a “dad” (Michael Healy) whose interest in her morphs from paternal to romantic and a “mom” (Rebecca Northan) whose maternal instincts are inconsistent at best. These disappointing experiences push Rosy to take a second look at the mosaic of supportive relationships that were right in front of her all along.

A story like this lives and dies on the strength of its star and Ellie Moon shines brightly as Rosy, an objective successful young adult emotionally stunted by lingering demons. She effortlessly carries every scene, her scripted dialogue almost seeming superfluous next to her stellar screen presence.

Knox keeps the screenplay (also by Moon!) moving with an assured hand and defining style as we’re swept up in Rosy’s journey. The wonderfully textured cinematography inserts us as fellow travelers, buoyed further by a punchy diegetic soundtrack (Rosy often sports wireless headphones).

Adult Adoption set itself up for tragedy but ends up landing firmly amongst those little salvations in life that are all around us. It’s a rewarding character piece that avoids Hollywood’s most egregious Oscar-bait cliches while still pulling audience heartstrings. Heartily recommended.