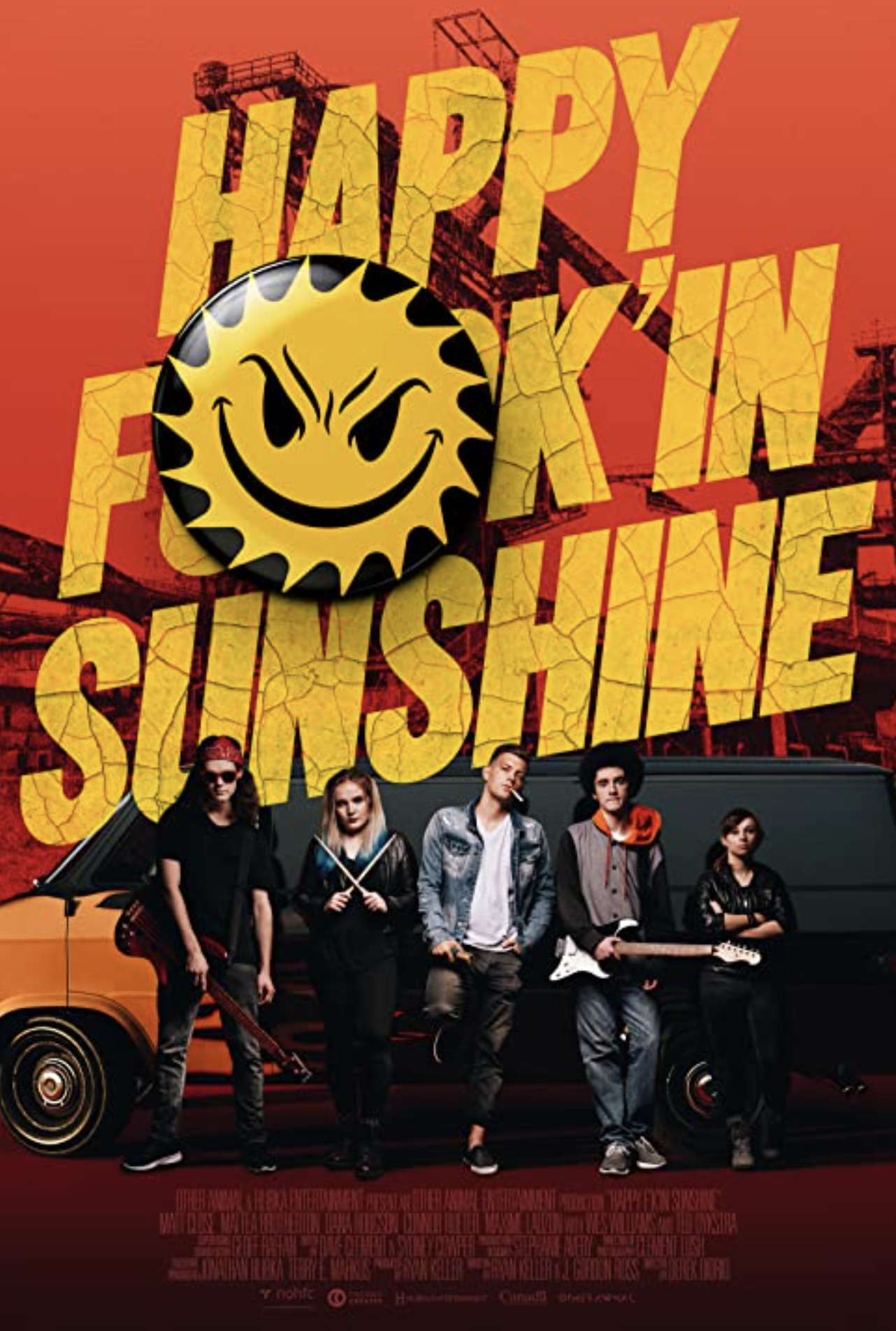 I’ve never had many intentions to start a band. I did once or twice in my pre-teen years, but I’ve never been too musically involved. And yet I may have the world’s largest collection of international music. Anyhow, this is a movie about how a teen band got its start and almost got somewhere. Bryan Adams struggled with the band in his teen years, so while I never started a band or got musically involved with anyone (actually I didn’t get too involved with anyone at all), I could still understand some of these hardships as I’ve had similar problems in my later years. Well, maybe one or two hardships. What’s important is nothing comes easy, and that’s shown here. It’s also shown you have to make the best of things during the worst of times.

Taking place in a small-town as most Canadian movies do, Happy FKN Sunshine starts out with a bi ol’ mill where all the workers go on strike, and it affects the entire town. During that city’s downtime, that’s when an unlikely combination of teens get together to form a band. It’s a lot like any other teen band movie but it explores some other factors. A few different ones, at least which is interesting.

It all starts out with a homemade Youtube music video…much like the ones I made back when I had a Youtube channel…for entertainment purposes… except they were weird Impersonator vids… with excessive effects. Anyways, it then goes straight into the lives of the youth of this town who struggle just as much as the mill workers who protest against the union. Then comes the unlikely musical bonding of Artie Porter (Dana Hodgson) who’s an outcast and Will Weston (Matt Close) who has a guitar of his own. Meanwhile, Will’s sister Ronnie (Mattea Brotherton) has started her own business selling weed and even though there is some competition with a local goon named Taylor (Aubrey Rand), she works her hardest to earn a profit. As Will hangs out with his bandmates, gothic girl River (Maxime Lauzon) and his egomaniac pal Vince (Connor Rueter), he talks about possibly getting an electric guitar seeing as their first music video is supposedly becoming viral already. But seeing as nobody’s hiring and his dad Frank (Lewis Hodgson) can’t loan any money (or be a good father either), Will has to find other ways of obtaining income. After a family altercation where Frank physically assaults his own daughter, the two siblings walk along the town together and Ronnie offers to buy Will a guitar if he works as a business associate for a while. Will struggles at first, but it ends up being worth it, and Will gets more than he expected when Ronnie buys him his first electric guitar at the music shop where Artie’s uncle Eddy (Ted Dykstra) works, and ends up getting Artie as their official bass player, and Eddy’s basement for practicing in. During their first practice session, this unlikely combo struggles at first, especially with some tension between Artie and Vince. As the most unlikely duo works together, Vince ends up learning more about Artie and his family. Uncle Eddy gives some feedback on how to improve the band’s sound, as he was once a big name in the music industry himself as Fast Eddy. It’s a matter of time and it seems they’re well on their way to supposed fame as they do their first live show in a garage. It almost bombs because Artie’s father (Ash Catherwood) died earlier and it sort of diverts him from his performance. At first, Vince reassures him, only to turn against him afterwards. Eddy tells Will things aren’t as easy and he has to be careful with his life. At the memorial service, the funeral director (Tracey Berti) explains how Artie’s father Alan was a dedicated member of the mill and then breaks the bad news to everyone: How the union made things worse by closing up the mill. So the little town is going to have no business for the foreseeable future. Will decides it’s time to get more serious about their EP release and figures maybe they should do their first gig in Toronto. He talks about it with Fast Eddy who offers to get one of the bigger names from out of town to listen. Unfortunately, none of the other band members seem to have their mojo, and it’s up to Will to find a way to get them motivated once more. What kind of song does it take? And who is going to come? Will they be impressed?

What it ultimately boils down to is that showbiz isn’t easy. And that Happy FKN Sunshine is a film full of foulmouth people. I haven’t heard this much profanity since I watched Internet reviewers years ago, and even they have toned down a whole lot given Youtube’s strict rules nowadays. But that’s what adds to the comedy. You hear f-bombs constantly and you got the giggles because of how funny the word sounds. It’s a very messy plot but it tells a good consistent story, and it not only shows the struggles of showbiz, but the struggles of adolescence, losing a family member, and judging somebody you barely know. The characters are a wide variety even with all the profanity, all showing unique personality traits and providing so much to the storyline. It’s got a lot of hilarious moments, not just Artie’s weird tall tales, but how interesting some things just instantly work out and things that catch characters off-guard. It’s not only the plot but the setup of the town. There’s not a whole lot to look out for, but the simplicity levels out the complexity of the issues our protagonist faces. For something that takes place in a small town where colour is very drab, it still feels like there’s a lot going on. This is one film you’ll be rocking out to for sure.

Happy FKN Sunshine is available to stream online. You can grab it on Youtube or Google Play.