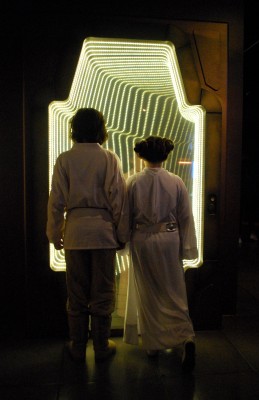 From grandfathers to grandkids, Star Wars speaks to them all. I remember my first encounter. I was 11 years old when George Lucas created it for our viewing pleasure back in May, 1977. Since that time there has been sequel after sequel. Then, the franchise was sold and bought. Disney is the grand master of making family entertainment and it was no surprise when they purchased it.

Since nobody does anything bigger than Disney, they hired writers, Lawrence Kasdan, Michael Arndt and J.J. Abrams, to recreate the NEW franchise. Once an opening date had been announced, the world awakened to a universal anticipation of global proportions.

With any dedicated fan, it is necessary to prove your loyalty by camping outside theatre doors days up to the premiere. Every Jedi/devoted fan is more than content to demonstrate their appreciation to the movie gods. I don’t recall that level of devotion back then, I do however remember my mind being expanded and leaving the theatre convinced somewhere in the universe lies a battle between good and the dark side.

Knowing that other 11-year-olds will be seeing it for their first time intrigues me to wonder what they will remember about it in another 38 years.