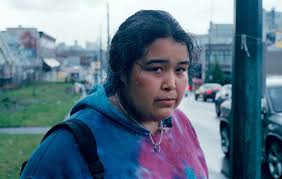 With the velocity of a well dressed buffalo heard and the excitement of a ufo sighting, the red carpet has arrived at the Vancouver International Film Festival. It was opening night and the cameras were all on their best behavior as the anticipation built. One by one they came into view and it was spectacular. Some were dressed up and others dressed down but all were very gracious while visiting our town. There were directors and actors, writers and more; it was definitely stardom galore. I polished my mic and applied my hand sanitizer, my stacked questions sat ready as I spotted my first appetizer.

I was looking forward to my first guest. The young and elegant Indigenous actress, Violet Nelson was approaching as she handled the press like a pro. This is her first red carpet event but you’d never know it. She carried herself with poise and grace as she smiled her way down the red path of stardom. She co-stars in the film, The Body Remembers When the World Broke Open. I couldn’t wait to find out how she became involved in the film.

“Can you tell me about the film, The Body Remembers When the World Broke Open and the character you play?”

“My character is Rosie. She’s very closed up and has put up walls. She’s not very open with her feelings and has grown up traumatized by a life in foster care. When she turned 19, she was told to go live her life while 8 month’s. pregnant and in an abusive relationship. Aila (Elle Máijá Tailfeathers) sees that she’s pregnant and crying, so together they go on a long journey together.”

“How did you hear about the role and how did you get the part?”

“Elle Máijá Tailfeathers (co-director) and I have a common friend named Chantelle that messaged me to say that there was this part in a feature film for an Indigenous woman, aged 16-22. I felt like acting wasn’t for me and not my thing, so I told my mom and she asked me why I wasn’t going to give it a try. I told her it wasn’t really my thing and she asked how I knew that, to which I replied, I don’t know. She told me to just do it and go for it; it’s either a yes or no that you’ll get it. I said okay, fine because I knew she wouldn’t let it go and she’d keep pushing me.”

“Are you happy that she pushed you into it?”

“Yes, because I actually really enjoy acting and I enjoy this business.”

“What does it mean to you to be part of this film?”

“I feel very grateful that I’ve been able to be a part of this story. It does hold a place in my heart and my mom went through an abusive relationship awhile back and I also went into foster care when I was younger, so that also holds a place in my heart.”

“What type of advice would you give other young Indigenous women that say acting isn’t for them?”

“I would tell them to just try it out, to try something new because they might enjoy it.”

Such great advice from a young but wise young lady. Having first hand insight along with the passion Violet expresses about the film as she talks about it truly compels you to get to the next screening a.s.a.p. Good luck Violet Nelson, we will see you at your next film. My next guest was also a very young 19 yr. old writer/director Phillip Youmans, representing his film Burning Cane. I had read that Phillip is being hailed as one to watch and mature beyond his years as a artist. I was about to feel old and under achieved in 3, 2, 1… but this isn’t about me, this is about talking to talented artists that tell amazing stories and reveal the pearls of their character or films. Let’s begin to peel back the layers, all the way to the core and seeds.

“We shot it in Laurel Valley, which is in Thibodaux, Louisiana and an hour and a half from my home in New Orleans. Wherever we were shooting, most of the crew would stay in the same Air B&B in the town nearby and commute back and forth.”

“Seventeen days of principal and another four days of pickups.”

“Your film, Burning Cane deals with a mothers religious convictions versus the love of her son.  Can you better explain the premise of the film?”

“She’s torn between how her religion is telling her how to deal with her son. The fundamentalist biblical context’s that guide her in her community are telling her to deal with her son.  The driving force behind that conversation in the community is the pastor, Reverend Tillman, who is also grappling with his own demons. He tells her to act in a very specific way that draws on the very biblical context and with that, she acts. This is one of the major discussions I wanted to have in Burning Cane. It’s about the real dangers of enacting a fundamentalist’s interpretation of really any religion but specifically Protestantism/ Southern Baptist because that’s what I grew up with. The story is about humanizing the lives of the people in this town. I was trying to create a full wide ranging multi-dimensional nuance depiction of these people. I did not want to create a one sided black and white interpretation of the people I grew up around, cause that just wouldn’t be true.”

“A lot of the questions I had growing up. In truth, I wanted to make this film because it felt right and I had so many questions about the church and so many unanswered questions which fuelled me trying to dissect it and create a portrait of this town.”

“What did you learn making this movie, if anything?”

“Everything! I learned everything. I learned that a film is rewritten three times, in the screenwriting phase, in production and in post. I learned the value of feedback sessions and the value of being patient in post. The short films I made before this one didn’t really satisfy me because I hadn’t put my all into it. With Burning Cane, I feel that, by going to the gutter and actually making a feature and seeing the process from start to finish. I learned more about the process that’s really invaluable and irreplaceable from anything that could ever be taught in a classroom/film school.”

“What do you foresee happening down the road in terms of other projects?”

“Everything that’s happened has made me feel so fortunate. I just love making movies. I recognized that early on and it’s a profession I really care about. It really gives me energy and happiness.”

Phillip Youmans has talent bursting from the seams and his film has already garnered incredible accolades. Making religious films requires a gentle touch and a great understanding/respect of it’s history and impact on society. Not an easy task which generates immense anticipation. It’s on the list. My next guest wearing a sharp suit walked with great confidence down that red path like it was his own backyard. I can tell a pro when I see one… and there goes the custodian. I think the lights might’ve blinded me for a moment. Now I understand the use of sunglasses. After a slight eyebrow adjustment, I managed to identify my next amazingly talented and award winning filmmaker. The writer, director and producer of Wet Season, the one and only (as far as I know) Anthony Chen.

“Can you explain the premise of the film, Wet Season?”

“The film is about a 40 yr. old woman facing a crisis in her life, in her marriage and in her career.  It’s about how she can get through this crisis, redefine herself and find a way to restart her life again. It’s completely told through the female perspective.”

“How was this film inspired?”

“I’ve always been interested in the female identity, female characters and I really explore that in my previous film Ilo Ilo and this film feels like a continuation of that.”

“In a time when women in their 40’s are often overlooked for roles and younger women are preferred, did you cast a 40 yr. old woman to play the lead for the purpose of more parity in the industry?”

“What would you say is the message behind this film?”

“What do you want people to walk away with after watching Wet Season?”

“If there’s one thing cinema’s do, it’s connecting with people emotionally. It’s a very grounded film and a piece of drama without big shocks and big surprises. If there’s one word to describe this film I’d say, compassion and I think people will feel that.”

“Why did you call it Wet Season?”

“Because it’s set during the Monsoon season in Singapore, where for 2 months it just rains and rains. That was the backdrop for the film and 80 percent of the film is set in rain. It was so challenging to shoot. It was so fun to write on paper but it wasn’t funny anymore when you have to execute it. It was expensive to shoot rain because you can’t be working on a film schedule and waiting for the clouds to come and the sky to give you rain. You have to create your own rain, which means lots of water tankers, gallons and gallons of water, rain rakes and lots of equipment. It was tough recreating not just the rain but many different types.”

I always wondered why filmmakers chose to film in extreme conditions and now I know why Anthony Chen did. Knowing how challenging it was to make Wet Season and Anthony’s attention to detail in order to fulfill his vision tells me that this is an incredible must watch film.

And that’s a wrap here at the red carpet opening night at VIFF. It’s been exciting, it’s been tantalizing and it’s been tremendously satisfying. The film, Guest of Honour by award wining writer/director Atom Egoyan was about to start and everyone was making their way inside.