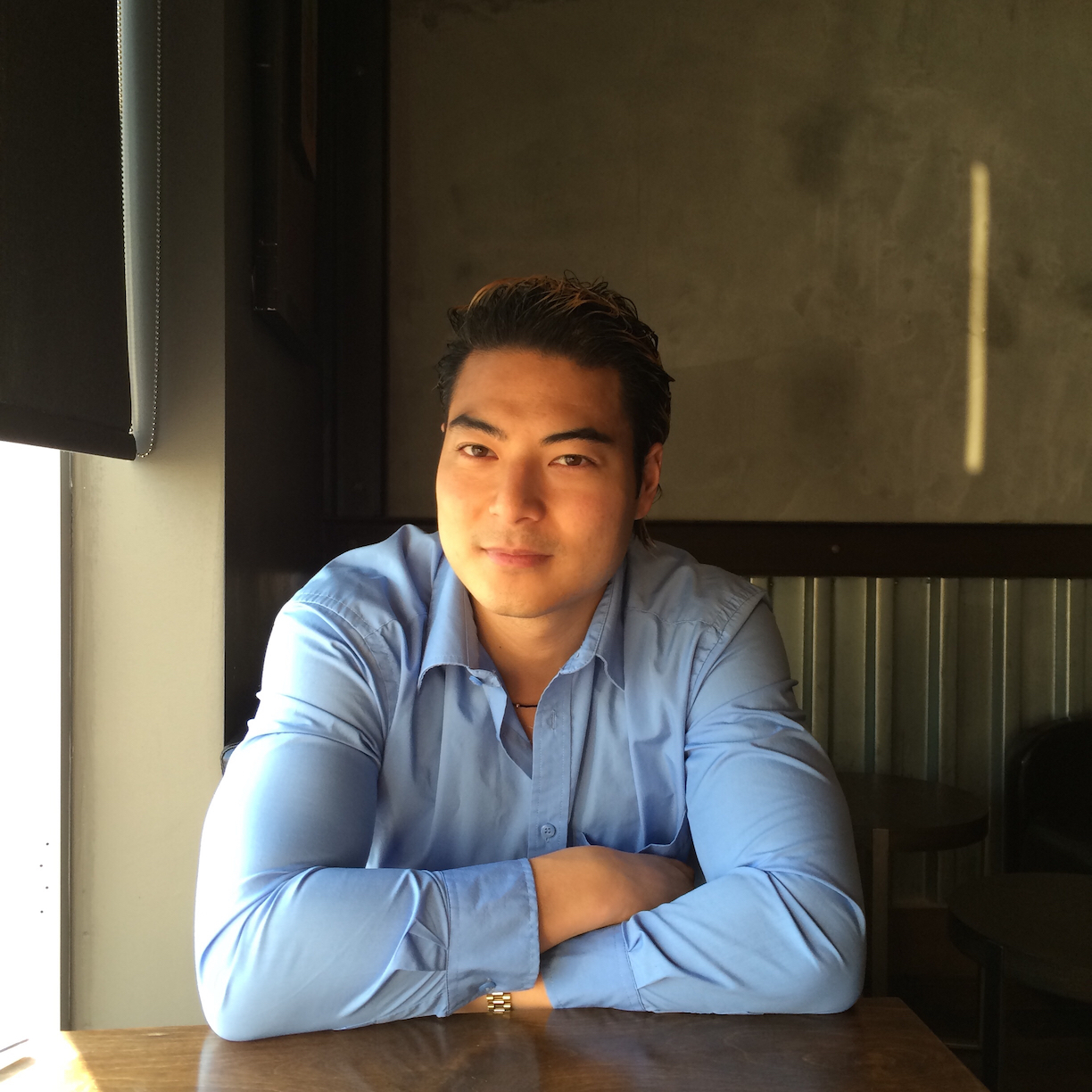 ‘Living the dream’ is something most of us say out of sarcasm. We say it when we can’t pay our bills, are tired of our dead end job and possibly realize we’re too old to try something new. I like to say it whenever I interview an actor, director or filmmaker at any level. For me it’s about the passion but for others it’s about the passion and the paycheck. They also say ‘if you love what you do you’ll never work a day in your life.’ I like to believe it’s a bit of both; meaning, you have to work hard to

reach sublime comfort. Most successful people will tell you there were sacrifices along the way, they took huge risks and failure was their best teacher. They all had confidence in themselves to make the leap and somehow they landed on their feet.

I had the extreme pleasure of speaking with an actor that is very new to the industry but has already tasted success after only a few steak dinners. From the outside looking in, you might say ‘beginners luck’ but there is so much more backstory to Chase Tang than meets his resume. He was recently signed on as a villain in the upcoming Netflix series Jupiter’s Legacy. In a nutshell, it’s about the children of superheroes growing up in their parents shadow while trying to be as successful as them. Chase lives in Toronto and because of global warming, I chose not to fly over for the interview. We can all do our part.

“Congratulations on Netflix’s upcoming Jupiter’s Legacy, how does that feel?”

“Yes, I took my first ever acting class in May of 2019. I look a lot different from then.”

“I think Jupiter’s Legacy is such a great concept for a show. The premise is that the children of super heroes are trying to measure up to their parents. It really reflects the times we live in today and the pressures youth feel to live up to their parents standards.”

“Especially given the generation gap with the millennials. Given the technology of today, the traditional values, everything’s more expensive and there are more options. People today want more flexibility and I find it fascinating that Jupiter’s Legacy is dealing with the generational gap.”

“How did you prepare for the audition?”

“I feel that Toronto is a small community. On the larger scale, I feel like I’ve been preparing for this for the last 3 years. I’m familiar with a casting director that’s brought me in many times. I’d auditioned for the role of Shang-Chi, in the new Marvel movie that was just cast a couple of months ago. My diet is really good but for any audition I’ll always eat properly a couple days before. For this audition I prepared the aesthetics properly, so I put in a lot of work. I really wanted to ensure that the external vision was different and stood out. I kind of new who the Asian actors were in Toronto and I felt like I had a good feel for the landscape. I wanted to bring a visual that was so clear and they do tell you beforehand what they really want and what it’s suppose to look like. I’m very blessed to have booked it. I did have a feel for who I was competing against through the casting director so I wasn’t really shocked when I got the call back. The call back was extremely nice and intimate.”

“Once you did get the confirmation call, was there anything that you had to change in your lifestyle or research you had to do before shooting?”

“I had to free up a lot of my availability because although it’s filmed in Toronto, there’s a lot of traveling back and forth to LA which is where they have the headquarters. I had to ensure I was available for the next 1 ½ – 2 months. In terms of changes, I wouldn’t say that there was much at all because I’d already spent so much time visualizing how I wanted the character to look like and how I wanted to portray him.”

“Did it surprise you that they wanted you to be the villain?”

“It’s so funny cause anyone that knows me would definitely label me as the more sensitive, good guy type and not someone who’d come off as rugged or tough, however my appearance might come off as a bad boy/mysterious type. I think if I look like a villain, then it’s in my wheelhouse to play it. If I had a choice though, I’d like to be the hero.”

“As an Asian actor, do you feel like there are less roles for you or has the diversity movement in films leveled the playing field?”

“I came in at a time when diversity was on the service. I wasn’t facing massive challenges. When I came into acting, I’d auditioned for Crazy Rich Asians and Shang-Chi. There seemed to be a wave of Asian productions and there was a demand for more Asian actors, I even auditioned for Mulan. I certainly didn’t face the same struggles as actors that came before me a couple years earlier. When I came in there were a ton of roles out there for both Asian men and women. I think there’s going to be work for all ethnicities regardless of your background.” “What type of advice would you offer to other minority actors?”

“As a minority actor and before Jupiter’s Legacy, I’ve had a few strings of successes. I had a few young actors approach me and ask how I managed to get into the industry and I would say that my advice is not necessarily for minorities but to the majority of actors. You have to know the landscape and you have to know who the big casting agents are that cast for 95% of the major productions. These productions have the potential to change your career and if you book one you could end up in the mainstream. You have to understand your environment, you’ve got to understand who the decision makers are and you’ve also got to understand which agents in Canada, Toronto and Vancouver have that pull and relationships with casting directors. Whether you’re minority or not and don’t understand these basic things you’re going to end up burning yourself out. I came into this industry from the corporate world, so I approached it very strategically. There is a big portion around acting and aesthetics but you also have to know how the ecosystem works. If you’re in a minority, make sure you know who’s in your town and how you’ll stand out.”

“Were you able to bring some of the skills you acquired in the corporate world to the acting world?”

“So much. I was very fortunate where I was able to meet approx. 5 agents in Toronto that represent the top 10-20 most talented people coming out of Canada. I was able to meet these agents within the first year of my career. I know a lot of actors that aren’t afforded the same opportunity until their resume reflects solid credits.  The agents didn’t sign me at that time but they did share a lot of valuable resources with me. It allowed me to navigate the industry for the next few years. I feel that one of the reasons I was able to get my foot in the door to get them to take me seriously is partly because of my professionalism on a big level. I’ve got a background in technology, telecommunications and software sales. Being familiar with the technology helped me to utilize email tracker and my business sense to help with my objective to secure an in person meeting.”

“You’re in tremendous shape. I’ve seen your six-pack. Were you in that kind of shape before your audition?”

“Believe it or not, the last time I had a six pack I was 12 years old. I got it back in Dec. of ’16. From then until now I’ve maintained a good physique. My diet from Monday – Friday differs from Saturday and Sunday because I tweak it around auditions. I wasn’t in shape for 5 or 6 years but now I do a lot of sprinting, swimming and weight training with isolating exercises. My diet has made the biggest difference. I don’t even eat fruit but my girlfriend and I will sometimes binge on Sushi Friday nights but by Sunday I’ll get myself aesthetically ready again.”

“Are you friends with Simu Liu (Kim’s Convenience, Marvel’s Shang-Chi)?”

“We’ve met and crossed paths a couple of times but I wouldn’t say we’re friends. He’s an amazing dude, so confident and vibrant. I’d love to be friends with him but he’s a few levels up from where I’m at.”

“What types of roles are you attracted to playing?”

“I would say the perfect role that I’ve always been drawn to would be a combination of John Wick, Bangkok Dangerous and The Equalizer; a guy with a broken past and one man wrecking crew. I would love to be cast for the lead in a film like that where you have so much emotional baggage but you come off cool as ice.”

“How has this role changed your life?”

“It’s been insane. I’ve gotten so much press lately as well as so much other stuff coming down the pipeline in terms of requests for more insight about the character. I get so busy that I sometimes forget to eat and it sometimes feels like an out of body experience. It’s been a night and day experience and it’s completely changed my life.”

“Exploring the Amazon jungle or a haunted house?”

“You’re so new to the scene but yet you’ve already tasted huge success. What do you attribute that to?”

“I would say it’s the preparation. In a sense I have reverse engineered my life. I would distill it down to my ability to really understand how things work; from acting class to diet, to working out and budgeting my finances. It’s really the preparation that’s resulted in gaining any traction.”

Chase Tang is a powerhouse in a town without electricity. He brings energy, dedication and remarkable tenacity to every project. If you hear him saying ‘living the dream,’ you’ll now know why.