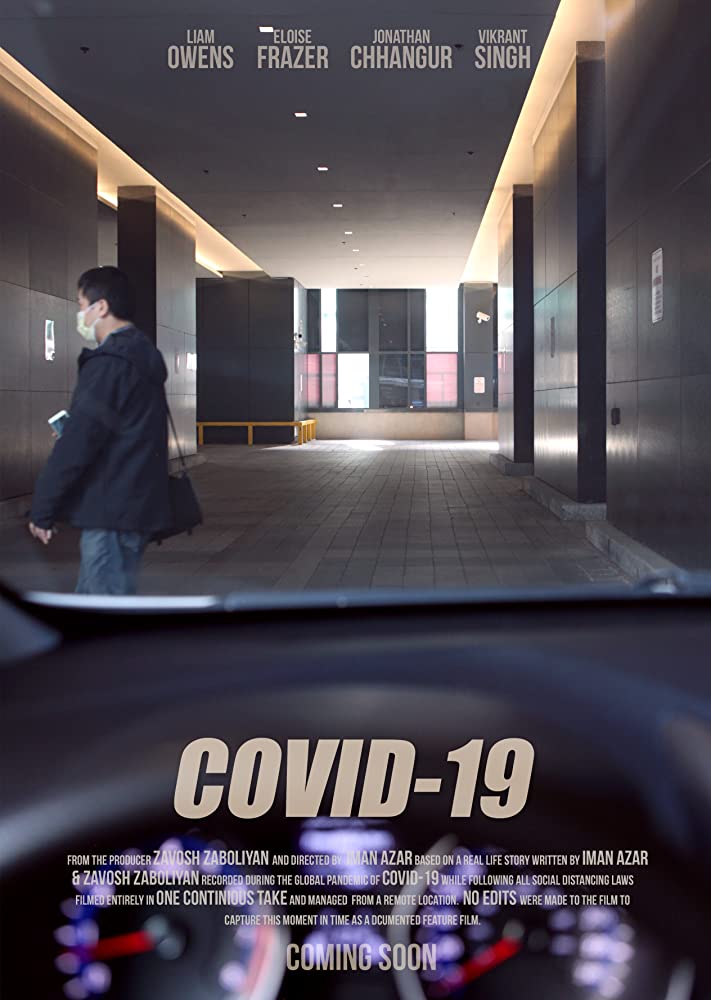 We’ve all had nightmares, dreams that wake you up with a slap of anxiety. You’re breathing heavy because the images are still fresh in your mind. Slowly they dissipate as your mind embraces reality. Everything is going to be okay and you are still safe. With every nightmare however, it’s never been about a virus; it’s usually sliding off the roof of a tall building, being lost in a dark forest or the talking doll. Whatever your nightmares are made of, not even the best psychics in the world dared to warn us of this pending pandemic… but it’s here now, in full force and we all need to be our own advocate to stay healthy and survive it. It takes 21 days to form a new habit and we’ve now had months, so let’s take a moment to reflect and talk about a film based on the Covid-19 virus and a producer and director that dared to go there.

Zavosh Zaboliyan is a Canadian producer and director with more than a decade of experience in the entertainment industry. He’s been credited in a number of award winning projects, including top international film festivals and a selection by the official ballot of the Grammy Awards under the category for best director. He produced this film with director Iman Azar, an Iranian/Canadian film maker. During his years, Iman grew up on set when his father (Ebrahim Ghafouri) was working as a famous Cinematographer. His films have gone onto receive international recognition at Cannes, Berlin and Venice among others. Iman’s filmmaking style consists of “realism” and capturing life without interpretations.

I had a truly unique conversation with producer Zavosh Zaboliyan on this film venture and I’ve also watched the film. The film, due to social distance and abiding by new laws of personal protection offers a window into 4 lives impacted by this global pandemic. It immerses the viewer but also puts them into others shoes and one size does fit all. It’s sometimes difficult to consider what others are dealing with along with their stresses and this film attempts to do that. Art reflecting life is always up to interpretation and I believe everyone will take something different away from watching this film. It is intended to provide hope for all and for everyone to keep moving forward…

“Given the current Covid situation and the obvious challenges, what prompted the idea to make a film about this crisis?”

“Myself, Iman Azar and the team have been in the film industry for quite some time and personally, I like to make films that have longevity and have an impact. A couple of weeks before the pandemic started, we were talking about doing something. For the first time in the world everyone is going through the same thing/same exact struggle. There is something about it that makes it timeless, so we thought we should capture a piece of this history that we’re sharing together. Many years down the road, people will be able to recall it and say that they remember that time. Down the road, that has a lot of value, which led us to making the decision to shoot during the pandemic to ensure we capture a true reflection of this global issue. Because of the anxiety and fear around the subject, we had to figure out how to do it without interacting with the actors in person.”

“I can just imagine what people’s reaction may have been like once they heard you wanted to shoot a film. Can you describe their reaction?”

“Actually, while we were having discussions around the decision to use union or non-union actors, we began to get a lot of interest but part of the entire creative narrative was to be able to film it as realistically as possible without adding any ideologies, taking a side in the situation or without placing any blame; it’s really about life as it’s happening. With that being said, we decided to find actors that were a good fit but were less dramatic and had less acting experience to make it as life-like as possible. We wanted the look of realism, which was a challenge but we also added an additional challenge because we wanted to film it in one take. It was quite difficult and I know this isn’t the first time filmmakers have done that or made it look like one take in post but we took it on and the challenges were plenty (laughing).”

“Did Iman Azar write the screenplay?”

“Iman and I co-wrote the project and I’m wearing the producer hat, he’s wearing the directors hat. Iman’s father, Ebrahim Ghafouri is one of top Iranian Cinematographers that’s worked with many legends and his films have been to Cannes, Berlin, Venice. Iman grew up in cinema and not many people have his lens to view the world and to capture it in a realism style. This film was a perfect fit for him and he was able to work his magic in terms of making it very life-like and allowing the actors to do their thing.”

“How did you manage auditions for the film?”

“We did all of our auditions remotely. I had contacted several agencies in Ontario and none of them were picking up. We went online and started casting from Linkden, Facebook and any other site we could fine actors. Once we contacted the actors, we had virtual rehearsals over Zoom. Another part of this entire process was also documenting it and over the next couple of weeks we’ll have ‘the making of’ the entire film.”

“How many actors were in the film?”

“To answer that I’ll explain the plot and synopsis of the story. It involves an Uber driver/cab driver that is an essential worker during the pandemic. He has a young family at home and has to risk his life by going out there to take people from A to B. In his day he comes across 3 passengers that are also affected by the pandemic with different challenges. One of them has just arrived back to the country and has to go into self-isolation for 14 days. Another passenger isn’t really bothered by the pandemic and the third passenger is in business. The driver has rent due and has to deal with his own personal challenges, which makes this film so relatable and life-like as a narrated feature.” “Did you have any reservations about shooting a movie versus a documentary?”

“If we were to pursue that route we would have to interview people that were essential workers and not actors, we’d have to go after different people with different viewpoints. With this, it’s a feature drama but it’s done in a style that feels very vivid when you’re inside the car. When you look out the window you can feel the pandemic, you can see the empty streets, it’s not a reenactment. It is unusual and it’s difficult to compare to other projects. For that reason alone we thought it might have some value. We had between 10-15 people involved in the making of this film because a lot of it was done remotely. We had associate producers helping on pre production and post-production as well using a colouring house in Toronto called Alter Ego; they’ve done Mad Max and Happy Feet. We sent the footage to them and they were able to bring out the look we wanted. We worked with a couple of different sound companies to enhance the sound because it wasn’t created in the same manner of other films. We couldn’t recreate the audio with dubbing or bring the actors back into a studio, we were limited in terms of how many layers we can add or remove. There were also the outside sounds, so there were a few challenges to deal with during the post.”

“Have you and Iman worked together before?”

“We’ve worked on a project a few years ago as well as other projects with other colleagues, so we were pretty familiar with each others working. On this project we had to limit our interactions, keeping the distance, wearing masks and gloves. We also didn’t want to step on any laws and the distance laws were not as strict as they are now. When the actors stepped into the car, there was hand sanitizer, gloves and masks; nobody had any symptoms then and two weeks after filming everyone is still in good health. We tested the cameras and equipment prior to shooting and had 3 devices and phones inside the car that would allow us to see and hear inside and outside the car. We had extra memory cards, back up batteries and backup drives for the files. The driver had to do a second take, which took awhile because you’re driving from the airport to the city. He needed time to recompose himself for the second take. We used the second take because he had fought through the scene when the pressure was on. It added another layer to his personal journey.”

“How did you know you had all the shots? Did you have to watch all the footage from beginning to end after each shoot?”

“We had a GPS tracker and Iman and I were following the car, directing and producing remotely. We had eyes in the car and we also had a specific way of communicating with the actor. We also knew where he was going to be making all of his stops. We would watch both takes and listen to opinions on the best one before making a decision.”

Zavosh adds, “One thing we really wanted to leave with the viewer is the element of hope. I’m sure there’s going to be other films about Covid but they’ll probably be focused on fear; with this film we wanted to let the interactions bring out a message of hope to humanity. It’s very subtle but once you’ve watched the entire film, it translates well. This character is going through a lot but at the end of the day he has hope for the future. This film is a tribute to all the essential workers.”

“How were you able to provide that message of hope in the story?”

“On the grander scale, we are all in it together but when you go into the individual characters lives, such as the girl travelling; it’s in her subtle movements, lowering her mask and trusting herself a little. When we look at the drivers character, we learn a lot about his struggles with paying his overdue rent, a bounced cheque, his wife is concerned and throughout his driving he’s in self reflection, he’s calling his landlord, his wife and listening to the news/music. All of the sound and visuals help to carry you through to the end where he has an interaction with someone that has a business background and it gives the driver hope. Each person finds a glimmer of hope to keep moving forward and that’s all we can do right now.”

“In terms of getting the film out there for people to see, what and where are you thinking?”

“We’ve submitted it to a number of International festivals and it’s been really challenging but we are hoping to premiere at one film festival; whether that’s TIFF, VIFF or in Europe, there’s plenty of festivals that we hope would see the work as valuable. We’re also going to be speaking with distributors that have different territories such as global distribution, VOD, Netflix and Amazon.”

I had wondered if anyone would dare to make a film about our current global condition and find a way to do it safely; it seems that they have and now they just need to find their audience.