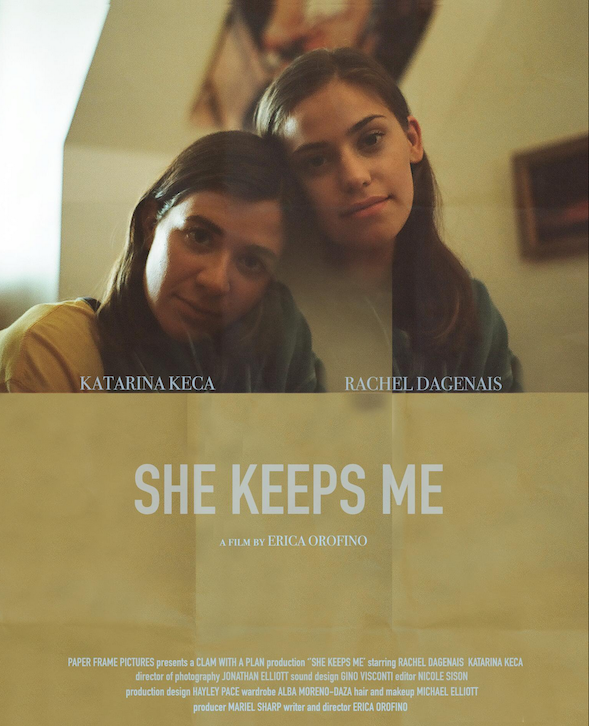 When we sit down to watch a film, we are generally going in with an open mind and a general idea of the subject matter. What we’re not always prepared for, are the emotions, the inner reflection, the moral gut check. When a film can move you and keep you talking long after it’s over, then it must’ve resonated with you on some level. Perhaps it tapped into a fear or made you question your courage, your judgement, your empathy and your loyalty. Films can be helpful, they can present the facts and let the characters make the choice, with you pondering the right or wrong in it. It won’t always give you the right choice but it’s the right choice for the story and that’s why we love them. It’s escapism without the consequences of choosing.

She Keeps Me is an extraordinary short film with an incredible dilemma. Written and directed by Award – winning Erica Orofino and produced by Mariel Sharp. It stars Rachel Dagenais (Grand Army, Boys vs Girls), Katarina Keca (The Juju Gum Conspiracy, Girls to the Front) and Katie Messina (Being Erica, Handmaid’s Tale). The cast is flawless and the story is bulletproof! This film is short in minutes but it lingers into your thoughts and finds the loop button. Orofino is masterful at tapping into human emotion, genuine instinct, the psychology of mental health and the limitations of family obligation.

She Keeps Me – the strained relationship between two sisters reaches a dangerous climax, in this exploration of family ties, mental illness, and self-sacrifice. It recently screened at The Female Eye Film Festival, was the recipient of ‘Best Canadian Short’ at the Pendance Film Festival and was recently an official selection at the Atlanta Film Festival.

Orofino is passionate about stories by underrepresented voices and her work is fueled by the desire to bring people together to create social change. Her work focuses on the female perspective, sexuality, complex familial relationships and mental illness. A champion who’s raising the torch to shine a light on subjects, people and issues that require a second look. Her films are impactful, they’re entertaining and they’re raising eyebrows. Fasten your seatbelt and anticipate the turns but roll down the window to enhance the ride!

Her first short ‘Fantome’ (2017), wowed audiences at the Bloody Mary Film Festival (2018) and the Women in Horror Film Festival (2017). It was developed as a feature length screenplay that landed in the top 15 projects nationwide – in Cineplex’s Cinecoup film accelerator program. Her short comedy ‘Tampon’ (2019) won Audience Choice Award at the Vancouver Short Film fest and was nominated for Best Comedy at the Austin After Dark Film Festival. She’s been nominated for Best Writing at the Women In Horror Film Festival (2020) for her script, A Noise That Carries in 2019 and her latest comedy short, Hanna Has H*rpes is currently in post-production. It explores (and makes fun of) the misconceptions and stigma surrounding sexually transmitted infections.

Erica Orofino continues to create cinema gold and I was both honoured and grateful to talk to this game changer. Making films with a purpose is what I always hope to feel  when I watch a movie. She Keeps Me has a great purpose and I was able to explore that further with Orofino. Roll the tape!

HNMAG “This was an incredible film with amazing performances. How was the story inspired?”

ERICA “It’s inspired by experiences that I’ve had, either by myself or with a loved one that struggles with mental illness. I pulled from personal experiences.”

HNMAG “I loved the film and the positive message in it. Do you want to keep making films with a strong message?”

HNMAG “The performances were powerful. Where did you find all of the cast?”

ERICA “I have worked with Katarina (Keca) who plays the sister that has bipolar. We’ve worked together a lot and are good friends. Casting her for the role of Lena was easy, I just knew she could do it. I found Rachel (Dagenais) through a casting agent named Shasta, who operates out of Jigsaw in Toronto. Rachel embodied the role of Alessandra – she really lived and breathed her. She was the perfect Alessandra to Katarina’s Lena.”

HNMAG “How long did it take you to shoot this film?”

ERICA “It took a few months to write and the filming took 4-5 days to shoot. We filmed it in Grimsby, Ontario. It’s actually where Katarina grew up – we filmed it in her parents’ home. In some aspects it may have helped but in others, it may also have hindered because it is such a personal space for her. In some aspects, it might’ve been more difficult for her to get into character but in some ways it may have been more comfortable… I’m only assuming.”

HNMAG “The actor playing the mother also had an incredible performance. Did you know her prior to casting?”

ERICA “No, I did not know her. That’s Katie Messina playing the mother. I found Katie through a casting call as well and she was so perfect for the role. She’s Italian, the story resonated with her, she understood the backstory and we dove into it really quickly. I loved her too.”

HNMAG “With this story, are you suggesting that families put personal bickering aside when family really needs you?”

ERICA “I don’t think that’s the specific message I’m trying to deliver with the film. I’m leaving it up to the individual to make their own decision, like Alessandra does. She’s put in a really difficult situation – having to choose between staying where she is and continuing to be her sister’s support… or making a decision just for herself, that could jeopardize her sister. In terms of the reception I’ve gotten on the movie, I get a lot of questions on ‘why did she stay, I would’ve left’ but then there’s other people that are saying that they understood why she did. When you’re in a caretaking position like Alessandra is, it’s very difficult to put yourself first sometimes, especially in a European family, where you’re taught – family comes first. You should essentially do whatever you need to do for your family. I think I’m asking the audience if they agree with that and/or what is the cost, is it worth it? Alessandra makes a choice and she decides to stay but you don’t learn the consequences of that – negative or positive.”

HNMAG “Any plans for a part II?”

ERICA “I’ve been getting that question a lot but right now I don’t have any plans for a part II or feature length version of this story. It feels like this story ends here but I am inspired and interested in the themes that are present in this story. Those themes will be carried onto a larger piece and into a feature at some point for sure.”

HNMAG “How did you finance the film?”

ERICA “I financed it, mostly through crowdsourcing. My producer, Mariel Sharp and I set up a crowdfunding campaign and we crowdsourced the majority of the film’s budget. Some of it came from personal contributions, like myself and another small portion came from private investors. I’m very grateful to everyone that contributed to the film and I wouldn’t have been able to make it without them.”

HNMAG “What kind of traffic is the film seeing? Is it still in festivals or do you have distribution?”

HNMAG “Have you been able to attend any of the live festivals?”

ERICA “Yes, I went to Atlanta in April, I’ll be attending the TIFF Lightbox on Thursday and also the festival in Oakville. We finally have some in person screenings and I’m so excited for that.”

HNMAG “Do you have other projects in the works after this film?”

ERICA “Yes, I do. I have 2 short films currently in post production and I also have big plans for the summer that I can’t reveal yet… but I will be working on a feature project at some point soon.”

It is film festival season and I know that She Keeps Me is going to be on everyone’s lips this summer. You heard it here first, so buy your festival tickets and support great Canadian filmmaking at its best! Erica Orofino brings her best every time and she was born to tell great stories…