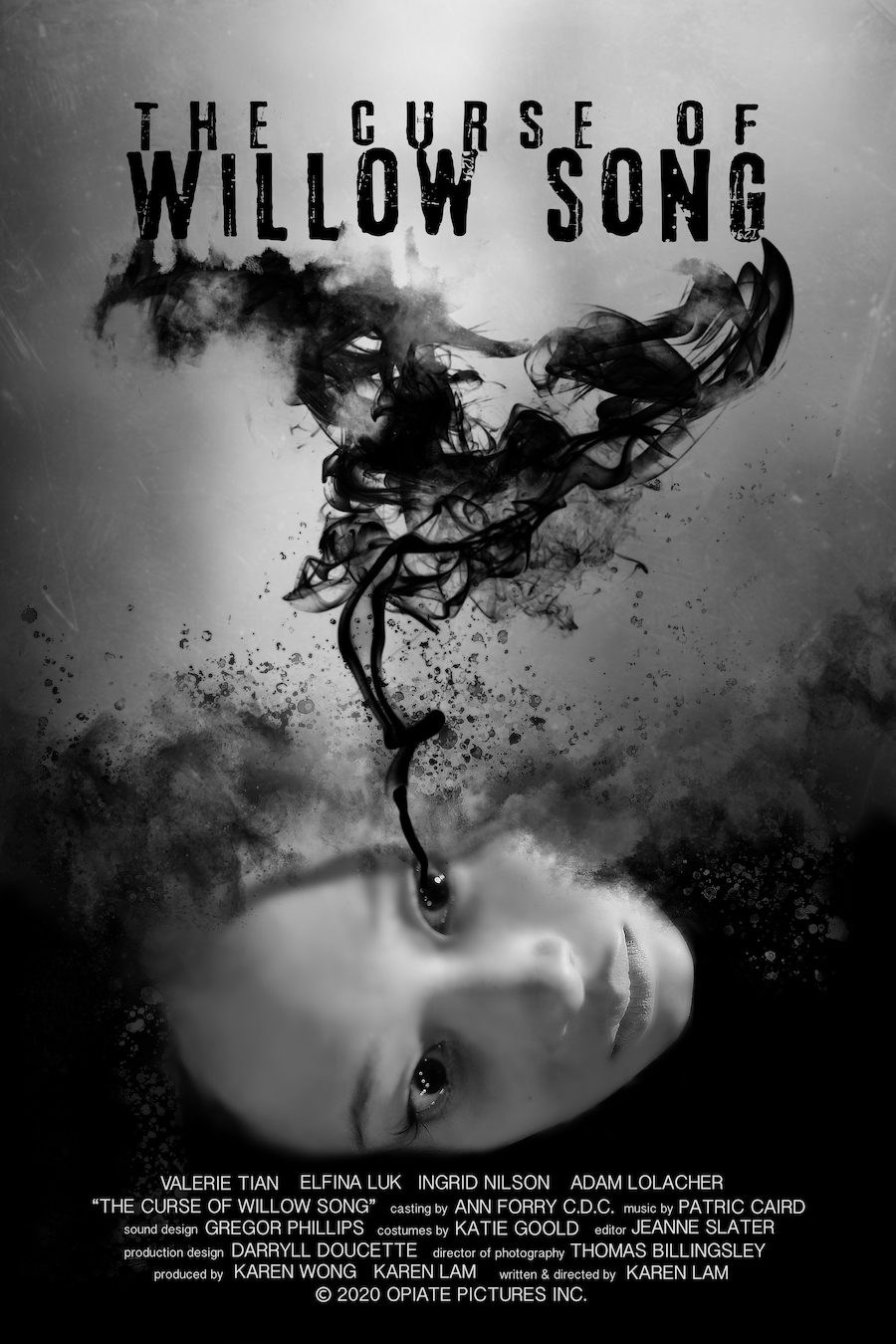 The Leo Awards have arrived – online! The vibe was definitely different… but the films were top shelf, as always and the excitement was still very present – from the comfort of your home. It spanned over a three-day period and I felt like they spared no expense in hosting the award show. There were jokes, great stories, awkward acceptance speeches and some terrific authentic laughs despite our current pandemic. This award show really demonstrates strength and unity within the film community and industry. We need entertainment and distraction from the suffering and turmoil that we’re all dealing with and the Leo Awards certainly help with that in a big way.

In the aftermath of the award show, I was fortunate enough to book a few interviews with some of the nominees and winners. My first interview is with writer, director and co-producer of The Curse of Willow Song, Karen Lam. However, before we started chatting about her film we discussed in depth – the pandemic and the social differences between the US and Canada. We discussed wearing masks and how it’s become a political statement rather than a safety measure. Talking about the changes that we’ve both noticed in people and the social divisions that are happening, really felt therapeutic and necessary. Karen tells me that she is still waiting for the zombies to show up, but that is the horror writer in her…

Karen explains that she and Karen Wong – producer, had just completed the film very close to the Leo Awards opening. The Curse of Willow Song will have its world premiere in Toronto this fall. Although Karen Lam is pleased to have the film premiering at a festival, she ponders the new era of online award shows and all the prestige that is lost with it, rather than travelling to actual festivals in Cannes, Berlin, Toronto. She asks the question – ‘does it matter which platform was chosen if we’re all viewing it in the same way and what does that mean for the next couple of years and – once you dismantle something, how hard is it to build it back up again?’

The Curse of Willow Song had won for Best Directing and Best Cinematography. Karen was extremely surprised to win because she says its usually her cast and crew that win the awards and the real reward is the joy in being able to make her films.

“Congratulations on winning best director. What was that like accepting an award, virtually?”

“When I won, I was in shock. There’s a countdown clock on Zoom and I was trying to navigate the technicalities of my microphone as the clock was ticking down – I felt like I was stuck at a crosswalk and had to run (laughing). I think my Family Feud days are over (laughing), I’m not good with the clock. When I won, a voice comes over my Zoom telling me to unmute my mic. I think for 5 seconds I probably looked like a deer in the headlights.”

“What is the premise of this film?”

“It’s about a young woman that gets released from prison and her family are gangsters that she is ordered to have no contact with. She’s living in the East side in a halfway house and things go south for her – the next thing you know, she’s back with the family and tasked with watching an abandoned warehouse that her family uses for money laundering. She begins seeing things in the warehouse – but are they hallucinations making the girl haunted or is the warehouse haunted? Although it took us 1 ½ years to finish editing this film in post because of some SFX, this film seems much more relevant now. The film deals with racism and isolationism and when we see Willow Song (main character) in the warehouse by herself having hallucinatory dreams – it feels more relevant and more political than I had anticipated consciously when I was writing and directing it.”

“What inspired you to write this story?”

“I was really fortunate that, in the summer of 2017 when I was researching a documentary about female inmates in Portland, Oregon being trained to be firefighters. I flew down to spend a few days with the women being trained. As it happens, it was a hot dry summer with a number of active forest fires out of control. In speaking to the women and hearing their stories – there was one specific woman that we were talking to that was getting out in 20 days. I had asked her if she was excited; she told me she was actually scared because it was the first time in her life that she was sober, she had a schedule and a purpose. Her brother was a drug-dealer, which is why she was incarcerated. She didn’t know what life would be like outside of the penitentiary walls and without her family. That was the starting point – where I began writing from. The second part of the inspiration came from racial discussions around real-estate in Vancouver and the belief that Asian people were coming in waves and taking over/driving up prices. As a person of Asian descent, I was looking through a specific lens.”

“Did you shoot the film in Vancouver?”

“We shot it in Langley, in a warehouse – strangely enough across from the Willow Brook mall. It seemed so odd that everything was Willow related and it kept popping up as a theme, with a Willow video store in the neighbourhood. I did choose to shoot it in black and white on an 8 K Red Weapon camera. It’s a throwback to old samurai ghost story films that I was very inspired from. I’d never shot anything in black and white before but it’s something I’ve always wanted to try – secondly, it’s the kind of framing I wanted. Although Willow had gotten out of the penitentiary, I wanted every frame to feel like she was still incarcerated. My DOP, Thomas Billingsly and I drove around all summer capturing footage of construction sites to add an apocalyptic feel to it.”

“Have you added any reoccurring themes in your film?”

“I do play with frame rate changes because we do have hallucinatory scenes in this other dream world – that gives it a dreamy floaty quality. We played with different frame rates because I wanted to play with the idea of ‘is she going mad, is she being haunted or does she have the ability to manifest the haunting itself; which is an ability called PK (psychokinesis), where people can create an energy when under extreme stress that resembles a poltergeist.”

I found it fascinating, the amount of research that Karen did for her film. She follows up with, ‘as someone that’s creating, you’re needing to be inspired by sources others may not have access to. I watched a lot of paranormal documentaries/reality TV series/ghost hunter type shows. I didn’t want to make the usual ghost story/haunting, so I explored what else was out there before becoming interested in the phenomena of PK and the idea of intersecting plains of existence that can come through.”

“I basically used tax credits from my second feature film, Evangeline as well as any sales from the film. I also threw in writing fees from other TV series that I’d worked on… I really threw everything into the mix to come up with the budget (laughing).” “I know that these are strange times in the film industry. Do you anticipate any issues in finding your audience?”

“It is a niche film but it fits into the socially conscious mixed with the supernatural – so I’m not sure where people are putting it. What’s interesting though, is that the film is premiering at a festival that is genre neutral and celebrates people of colour. I’ve never been able to get any of my films into the Asian film festivals but this is the first time one of my films are set in the Chinese community with a very different take on it.”

“How did you and Karen Wong become producing partners?”

“Oh my goodness, so long ago – she was my production accountant when I was still producing. We met in 2000 and started working together with no aspirations of writing or directing at the time. It wasn’t until 2006 that we got into the National Screen Institute Drama Prize, which was a competitive short film program. She came on as my producer and it was the first time I was writing and directing. I made my first short film called The Cabinet, which did quite well – from that point, Karen’s been my producer on almost 90% of my films ever since… it’s been a great partnership.”

“When do you foresee yourself feeling comfortable enough to return to camera?”

“I think I’ll know when I know but there has to be some assemblance of normal interaction. On a little indie, we work very close but we don’t have the budget to add the hours it would take to apply the extra protocols. I do have my industrial and commercial work but for my own feature films and projects they’re independently financed. Unless I’m paying full union rates, I don’t feel comfortable asking people to come back and endanger their lives for something that feels like an experimental project. At this point I’m very grateful to have a writing hat to fall back on and am happy to be recognized as a professional writer in the same way that I am with my directing.”

Karen adds that she started her professional writing career on the first season of Van Helsing and later, Ghost Wars. She’s been able to establish herself as a competent commercial writer. In addition, she is a woman of colour – therefore bringing 3 elements to every production/studio for consideration.  Karen Lam also enjoys writing dark fantasy, magical realism and anything with bit of a dark twist. ‘A standard romcom, comedy or drama would not appeal to me, it would have to include some sort of metaphysical component that I really like.’ A little trivia that Karen Lam had left me with, is she moved to Vancouver in ‘93 for law school. Once she became a lawyer one of her first jobs was working as ‘in house legal council’ for BC Film, which is now Creative BC and where she helped draft up the tax credit program. If you’re familiar with Bob Wong (Creative BC) – Karen hired him. They have so much history together and she tells me that Robert came into the job interview carrying a tray of donuts. She later faced her crossroad where she could stay on the bureaucratic side or move into the industry, which happened in 2000 – she tells me it’s been 20 years since she’s been without a day job.

Karen acknowledges that productions returning to shooting are only 1 illness/virus away from shutting down again. She’s had offers to direct MOV’s but has preferred to focus her attention on writing from the comfort of Zoom/home office. She refuses to put her people at risk just because she had a vision. She says that ‘once you’re in her tribe, you’ll always be in her tribe… and will never leave (laughing)’.